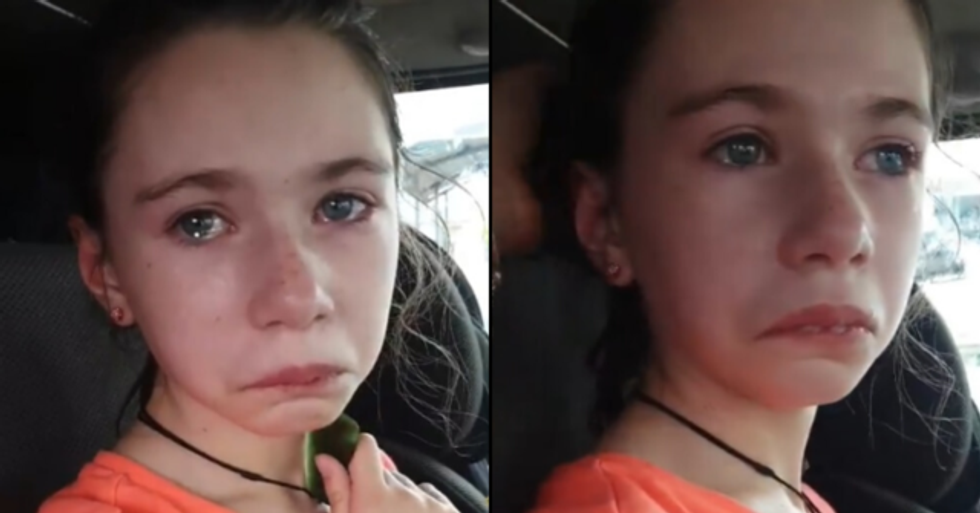 Only weeks after footage of a bullied boy driven to the brink of suicide went viral, a different parent desperate for change has taken to social media to share the heartbreaking footage of her own disabled child crying in the car after being attacked by a bully at school.

Keep scrolling to read the full story, and to watch the heartbreaking footage for yourself.

Thanks to recent events...

We are more aware of the impact that bullying has on children than we ever were before.

Every year, bullying is becoming less and less tolerated...

And more and more parents are speaking out when their children fall victim at the hands of cruel school bullies.

By now, you will all be aware of the story of Quaden Bayles.

9-year-old Quaden Bayles, from Queensland, Australia, went viral last month after footage of him on the brink of suicide was posted onto social media.

Out of desperation, his mom shared the heartwrenching footage onto Facebook...

In a bid to raise awareness of the effects bullying can have on children like Quaden, who has dwarfism.

The footage was incredibly difficult to watch.

And Quaden can be heard repeatedly saying how he wants to kill himself. “Give me a rope, I want to kill myself" and "I just want to stab myself in the heart… I want someone to kill me."

The youngster's turmoil was a result of school bullies...

Who had been repeatedly making fun of him for his height and other physical differences.

His heartbroken mom was at a loss at how to help her child...

So she shared his reaction to the world, saying: "This is what bullying does. So can you please educate your children, your families, your friends because all it takes is one more instance… And you wonder why kids are killing themselves."

And has since been viewed by millions of people all over the world.

Celebrities and sports stars alike spoke out to condemn bullying...

After copping relentless schoolyard bullying, Quaden Bayles' love for sport has led him to an unforgettable All-Sta… https://t.co/7ltFV8gL6A
— NITV (@NITV)1582520484.0

And millions of others slammed the school bullies who had driven poor Quaden to such a low point in his life.

@robshehadie You can literally see the damage that's already been caused to this young boy as a result of bullying.… https://t.co/asjMAKSqc1
— Joan (@Joan)1582178738.0

Surely, school bullies will have learned from the errors of their ways?

Because, mere weeks after Quaden went viral, another heartbroken parent has taken to social media to share her own child's experience with bullying.

Kerri Arnold is the latest parent to speak out against her child's bullies.

Arnold, from Hamilton, New Zealand, shared footage of her twelve-year-old daughter Aalyha blinking away tears after a difficult day at school.

Like Quaden, Aalyha is a little different from other children.

The young girl suffers from Angelman Syndrome, a rare disorder that can cause learning difficulties and delayed or no speech.

Aalyha is fully non-verbal and attends a special school in her hometown of Hamilton...

But this doesn't mean she's safe from school bullies.

Aalyah was victim to a brutal attack on Monday this week.

And, after being called by her school, Kerri decided to film the aftermath of the incident to highlight the severity of bullying.

Aalyah can be seen sitting quietly in the car, tears in her eyes and visibly shell-shocked.

While Kerri can be heard explaining: "Today, at approximately 1:30, I was phoned by her school, and she has been a victim of bullying."

Aalyah had marks all over her body from the attack.

In a trembling voice, Kerri talked through her daughter's injuries. "This young boy has scratched her eye, bit the side of her face, scratched her arm, and she's got scratches on her back."

The bite mark on the side of her face is simply shocking.

Kerri continued: “Aalyha is non-verbal. She’s always happy. It pains me to see my little girl so upset."

Speaking to Australia's 7 News, Kerri explained that the school had insisted that Aalyha accidentally became mixed up in the altercation.

“She [the teacher] told me Aalyha got in the way of another student," she said. "But let’s be real here, Aalyha was attacked."

And, since the attack, Kerri claims that her daughter has become quiet and withdrawn.

“She woke up last night and was very upset," she explained.

But, sadly, this isn't the first time Aaylah has suffered at the hands of bullies.

A couple of years ago, the young girl was pushed into a window, breaking her tooth and fracturing her nose. “She has also been scratched on her face and back, pushed over which left grazes and big bruising on her knees and grazes on her palms of her hands," Kerri said.

And, taking to Facebook, Kerri expressed her gratitude to the way the teachers have handled the incident. "One of the long term teachers expressed to me her disgust and apologized for the student's behaviour and advised me that she has requested the boy be stood down." "I am happy to see action and some justice."

And has had a showering of supportive messages from people all over the world.

Let's hope that Aalyah can get the justice she deserves...

And that bullying can be brought to an end once and for all. Bullying is a serious issue in every country and affects people of all ages. One high school graduate had the best response to years of bullying... By calling out his perpetrators during his graduation speech. Keep scrolling for the full story...