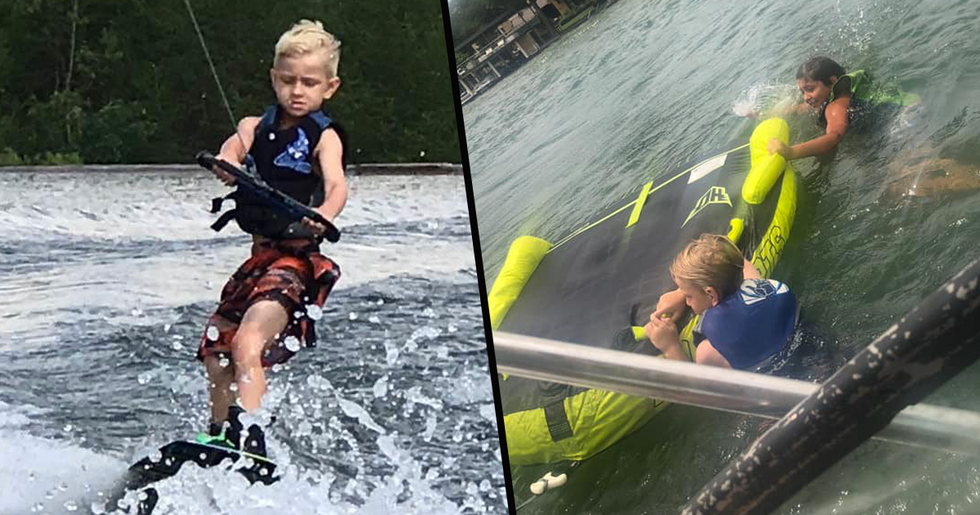 A mom has shared an urgent plea with other parents after her 9-year-old son suddenly and very tragically died from CO poisoning. This is utterly devastating...

All parents can relate...

There's literally nothing worse than the thought of something bad happening to our children.

We love and care about them so much...

And if anything was to ever happen to them, we don't know what we'd do.

The world we are living in is full of hidden dangers...

And there's no denying that it can be the most dangerous of places.

While we're constantly busy making sure our kids cross the road safely or that they don't talk to strangers...

There are so many unlikely hazards out there that many of us parents don't even think about.

Well, one distraught mom is using her heartbreaking experience to spread an important message to other parents.

Cassandra Free, who is from Broken Arrow in Oklahoma, is the mom of 3 kids: fifteen-year-old Johnathan, thirteen-year-old Blake, and 9-year-old Andy.

Cassandra has spent the summer with her family getting up to all kinds of fun and adventures...

And she has spent a lot of time in their nearby lake swimming and taking part in water sports such as wake-surfing and kayaking.

On June 6th, the family was manning a boat to go wake-surfing with a friend on Lake Eufaula in Eufaula, Oklahoma.

"The kids jumped in between riders and took turns," she explained. "They started out at the front, but because of the sun, the adults shifted into the shade of the Bimini top, an open-air canvas canopy on the front of the boat, and the boys moved to the back."

The kids spent the rest of the day wake-surfing...

Although there were times the kids had to hop off their wakeboards and they needed to drive the boat slowly across "no-wake zones," but the boys spent most of their day behind the boat. “It took a good long while to get back to the dock," Cassandra recalled, "Andy crawled onto the back of the boat, Blake laid out completely on the back seat, and John sat on the deck taking equipment."

Of course, her boys weren’t being "particularly helpful" so her husband had to yell at them to get their butts up and help out.

But then, 9-year-old Andy fell off their boat and "didn’t struggle." At first, they thought he was being "defiant," but soon it became clear that he needed help.

Cassandra's husband and a helpful stranger dove in and were able to grab him...

But by then, it was too late.

"He was recovered, but he never took another breath."

Many instantly assumed Andy had died as a result of drowning, but something didn't seem right.

"At the hospital, our older sons were insistent that their heads were killing them. Dizziness, nausea," the heartbroken mom recalled. At the time it all seemed like markers of a day spent in the sun, mixed with grief... but little did the family know that it was going to be so much worse.

The medical examiner who had taken care of Andy asked to test the other 2 boys.

As the family desperately waited for the test results, local news outlets started reporting that Andy had died from drowning.

"We did not dispute [previous reports] without having our own concrete evidence, but we knew that this wasn’t what happened," she wrote in a Facebook post. "He wasn’t on the dock. His brothers were treated that night at St. Francis for Acute Carbon Monoxide poisoning. Andrew has been swimming since he was 2 years old — he was a STRONG swimmer — and yet, he didn’t even struggle."

The autopsy spoke for itself.

Andy’s autopsy revealed that he had high (seventy-two percent) levels of COHb, or carboxyhemoglobin, "a stable complex of carbon monoxide that forms in red blood cells when carbon monoxide is inhaled," according to MedScape, which meant that he died from carbon monoxide poisoning, not drowning.

"Boats, even moving, create a backdraft of exhaust," Cassandra went on to explain. "That’s right. Exactly what I’ve typed: carbon monoxide exits the rear of the boat and drafts right back into the back of the boat. Backseat riders are especially vulnerable at low speeds and in long no-wake zones like the one we had to cross to return to the docks."

And it isn't spoken about enough... at all. "Our little Andy, our Dude, was probably slowly dying that afternoon/evening and we didn’t know it. He would’ve been tired. His head would’ve started to hurt. Sounds like too much sun after a long, physically draining day of wakeboarding, wake surfing, and tubing.

Tributes have since flooded in for the family, with comments about the situation.

We cannot imagine how painful this must be for Cassandra and her family to realize.

"Had he not fallen over, had he made it into the car, even if he wouldn’t have passed at the lake, he would’ve been so severely brain-damaged that he likely would’ve passed away in his sleep on the way home," she added. "Even if he would’ve gone immediately to the ER at that time, he still would’ve died."

Since posting her tragic story on Facebook, Cassandra's heartache has been shared more than 10,000 times...

And the mom is desperate for awareness to be raised around the dangers of CO poisoning. "Inboard boats can accumulate lethal levels [of carbon monoxide] in minutes. Boat owners will spend up to and even in excess of $100,000 for a boat. We trust our boats the way that we trust our cars, for the most part."

"Unless you know of the risk, unless you or someone you know has been affected, you don’t know to look for this."

"There should’ve been huge reforms to the boating industry. I want reform because, even if your boat is safe, the boat next to you might not be and its emissions can harm you and your passengers. It will be complicated, but it’s long overdue," she explained. "I will never forgive myself for what was out of my control, which is why I will continue to spread his story."

Rest in Peace, Andy. Our deepest thoughts and condolences go out to Cassandra and her family during this terrible time. For more, keep on reading to see why a mom warned other parents against a horrific TikTok challenge...