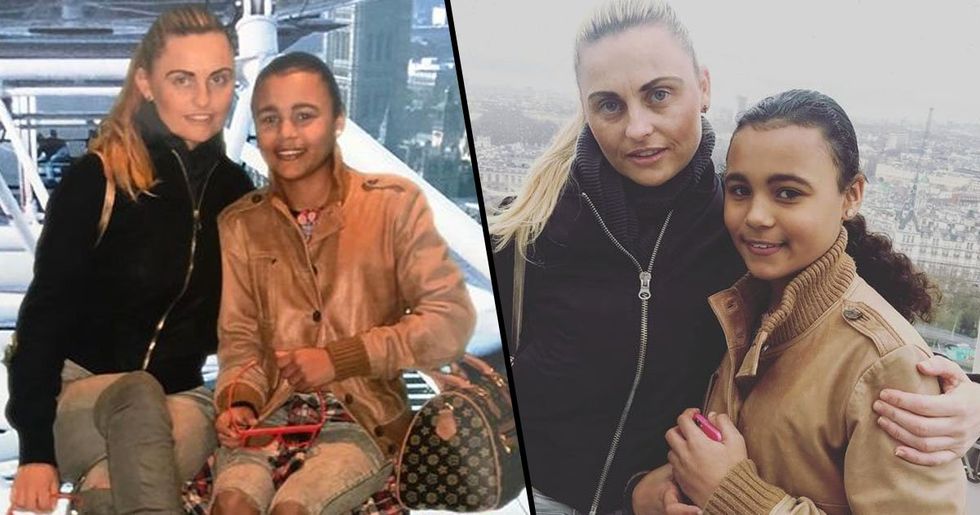 As parents, we would never dream of picking apart our children's' appearances. After all, in an era of Instagram and Facetune, teenagers have enough self-esteem battles going on without the need for further scrutiny from those closest to them.

But this mom has done just that, coming under fire for urging her teenage daughter to get plastic surgery because "ugly people get nowhere."

Although this wouldn't be the first time that the mom has caused a stir, as she hit the headlines last year for faking a mental illness to get a free nose job.

So, with a long list of problematic behavior under her belt, it's not all that surprising that she's pushing her daughter down the cosmetic surgery route.

Honestly, you wouldn't believe what she's said about her own daughter (spoiler alert, it's pretty bad)...

Carla Bellucci is a former model from the U.K.

According to her Instagram page, the mom-of-three from Hertfordshire, U.K, is an "internationally published model and TV presenter." Aside from modeling, she works as an anti-bullying campaigner, regularly teaming up with the organization Speak Out.

Yep.  The ex-model hit the headlines after admitting to faking depression to get a free nose job on the NHS - which obviously resulted in her receiving quite a lot of backlash.

She even went on national television to justify what she'd done.

The thirty-seven-year-old went onto the British morning show, This Morning, to explain herself. Apparently, she originally went to a Harley Street surgeon for her nose job, where she was quoted $7,290 which she wasn't prepared to pay out for. Instead, she went to her GP, where she says she flirted with the doctor, who told her how to play the system and bag the procedure for free. "The funny thing is I’ve never had depression, never been prescribed medication for it or had any therapy," she explained. "They didn’t check a thing."

Bellucci didn't see anything wrong with what she'd done.

She claimed to not care about "milking the system" because "that's what it's there for." Wow.

As you can imagine, people weren't happy with her surgery stunt.

The nation couldn't believe that she had played the system for a procedure that was purely cosmetic, with thousands of people taking to social media to slam the model.

People were so annoyed that a petition was launched to get her prosecuted.

The petition, at the time of writing, has 671 signatures, with people calling for her to give the money back that she "robbed" from the NHS. "This money is needed for genuinely ill people so she should be prosecuted for forgery and pay this money back," the petition read.

But it seems that the model is showing no signs of regret, because she's hit headlines once again...

This time, it's for encouraging her fourteen-year-old daughter to get plastic surgery. The mom shamelessly admitted that she's planning on making her teenage daughter, Tanisha, famous by having her follow in the same footsteps by going under the knife.

Her daughter has apparently said that she wants to be a famous reality star.

via: RAY COLLINS - THE SUN

And, according to Bellucci, her daughter's dream of achieving fame will come true through a number of plastic surgery procedures.

According to the ex-model, surgery is an "obvious" option for an aspiring celeb.

"If she wants to be a successful influencer and reality star then she will have to fit the look of the time - so surgery is the obvious option. She's good looking, but surgery will make her prettier," Bellucci said. Erm, what?

The thirty-seven-year-old has several procedures in mind for her daughter.

Including teeth veneers and breast implants. "She will need to rely on her looks to get on in life so she will need to be perfect. Ugly people get nowhere these days," the former model explained.

She also says that she doesn't care about her daughter's education.

Yes, you read that right. According to the model, her daughter isn't naturally intelligent, so she will have to rely on her looks in the future to become successful. Bellucci, who is also mom to 2 sons, said: ‘Tanisha isn’t the most academic of girls, so I don’t really care about her education, unlike with my boys."

Bellucci has one very specific critique of her daughter's body...

She believes that her daughter's bum "needs improving" and that it's "very flat" so would be in favor of the teenager getting a having a Brazilian butt lift - a surgery which has a mortality rate of 1 in three-thousand.

Despite the surgery being so risky, Bellucci doesn't appear to care about the consequences.

With so many people dying from the enhancement, you'd have thought that she'd have had reservations about sending her daughter off for the surgery. But it seems not, as she says that "looking good is the only thing that counts," not the risks.

And there's already a procedure that's definitely going ahead when Tanisha turns sixteen.

The teen is set to get fillers in 2 years' time, and mom is fully on board, obviously. "At the moment she loves the Kardashian look with the big bum and boobs and pouty lips. She's going to get fillers when she is 16, which I fully support."

So, how is she planning on paying for all of this?

Because we all know that she isn't overly fond of paying for surgery herself. But, the mom-of-three said that she has already started a savings account for her daughter's future plastic surgery - putting in $120 a month, as well as her daughter putting Christmas and birthday money into the surgery pot, too.

However, shockingly, she admitted that she would try to get the NHS to pay for her daughter's surgeries.

Although we don't know how she plans on doing that, considering she's been so public about cheating the NHS out of thousands for her own surgery. Despite all the backlash, she clearly hasn't learned her lesson.

While her daughter remains underage for surgery, in the meantime, Bellucci is forking out on pampering the teen.

$240 a month goes into maintaining her daughter's acrylic nails, tinted eyebrows, and hair extensions - which she has been doing since the teen was twelve.

Once again, people have been taking to social media to bash the mom.

Like this user, who called the mom's latest bid "insane," and said that it's "dangerous and destructive" to be pushing plastic surgery onto her young, impressionable daughter.

People are also pointing out the irony of her being an anti-bullying campaigner.

So Carla Bellucci, the Instagram 'star' and so called "anti-bullying campaigner", who faked depression to get a nos… https://t.co/kEAAwPE0wL
— Paul Holmes (@Paul Holmes)1565177036.0

You have to admit, it seems pretty hypocritical to be calling people ugly when you advocate for anti-bullying.

But it doesn't look like she'll call her plans off any time soon.

After all, she's already admitted to not caring about what people think. But given the risks of surgery, it seems pretty irresponsible to be pushing it on her daughter. In fact, some celebs have even vowed to never get surgery again after suffering mishaps as a result of going under the knife. One of the most recent being singer, Cardi B, who has opened up about her own plastic surgery going wrong - a mishap that's even caused her to cancel shows. Keep scrolling to watch the video and to see a picture of the unfortunate consequences of her surgery...