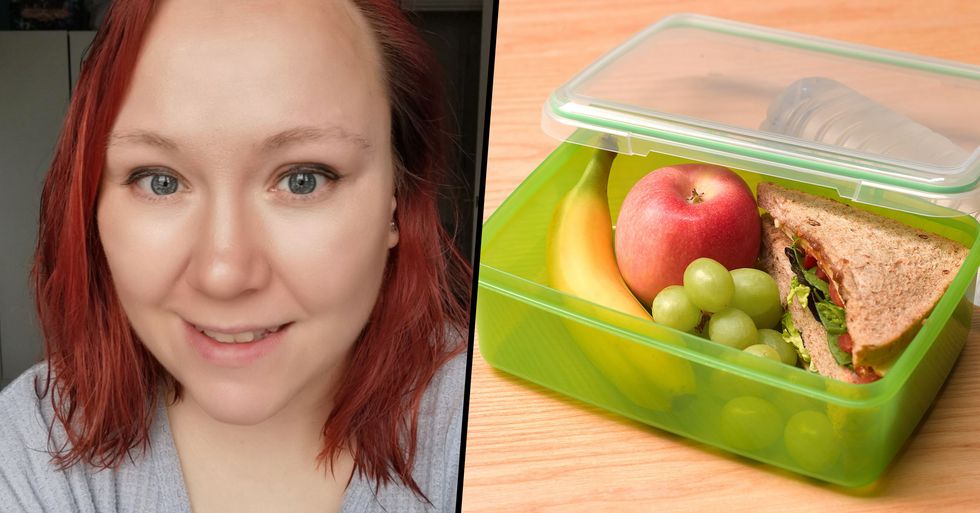 One mom has clapped back at her son's school after they gave her a strict list of foods she could give her child, and people are outraged...

Many schools have come under heavy fire for not offering enough healthy alternatives when it comes to food.

Parents are trying their best in some instances to pick up the slack.

Fortunately, there are a million resources out there for parents to get their kids the best nutrition possible on a daily basis.

And they don't seem to realize that some parents are already struggling when it comes to feeding their family...

Nevermind having to buy separate food for their children to fit in with what schools deem acceptable.

And parents have had enough...

A mum has clapped back at her son's primary school over their strict lunchbox regulations.

Jennifer Louise Ireton says the rules have increased the price of her weekly shop by $30!

Although she's worried if she doesn't comply with the new rules, that her son's food will be taken off him.

The school sent out an extensive list to parents about what's allowed and what isn't.

They also outlined that children weren't allowed to bring in treats to celebrate their birthday. Now that's just too far.

Jennifer, from the UK was sent the list prior to her 4-year-old son starting school.

The thirty-year-old said she feels "belittled" by the way the school has approached the issue.

The school's lunchbox guidelines state children should stick to this specific list...

At least one portion of fruit and one portion of vegetables every day. Some protein - meat, fish, cheese, or other sources of protein (e.g. hummus, peanut butter, homemade sausage rolls) - every day.

Children should have oily fish, such as salmon, smoked mackerel, or tuna at least once every three weeks. A starchy food such as any type of bread (preferably brown bread), pasta, rice, couscous, noodles, potatoes, or other types of cereals every day. Daily food such as milk, cheese, yogurt, fromage frais, or custard every day.

This school clearly doesn't realize some parents don't have the time or money to stick to these rules every day...

They are allowed only water (still or sparkling), fruit juice, semi-skimmed or skimmed milk, yogurt or milk drinks, and smoothies. Homemade cake or other desserts. Nuts, seeds, vegetables, and fruit (with no added salt, sugar, or fat). Snacks such as crisps and baked goods are fine.

I think we'd all like homemade sausage rolls or cakes baked for us every day...

But the reality is that there's not enough time in the day, especially as a parent, even without the extra worry of their children's lunchbox meeting school criteria.

This is what the school has banned...

Chocolate bars and chocolate-coated biscuits, sweets, meat products such as sausage rolls, individual pies, corned meat, and sausages/chipolatas should be included only occasionally and fizzy drinks.

The outraged mom-of-two, Jennifer, posted the school rules on Facebook to see what they thought of it all...

One parent replied: "You are not allowed to bring up your own children how you wish any more". While another argued: "They are just trying to keep the kids happy and healthy."

Jennifer said: "He's just started school and when I first received the guidelines, I felt condescended to."

"It seems unnecessary to tell parents exactly what they should be putting in their lunch boxes - we all try and feed our kids healthy stuff. It's very dictated."

"I would normally just feed them a sandwich, packet of crisps, veggie sticks and then a chocolate bar as a treat at home."

She feels as though the rules should be treated more like guidelines rather than being enforced on parents.

"It's a lot of pressure, it gives me a lot of anxiety knowing they will take food off the kids if it doesn't fit the requirements. Robin has a nut allergy but there are no restrictions on nuts which is unusual and worrying."

She finds it difficult to plan the specific meals every single day, as well as looking after her eighteen-month-old baby.

"If I had the time, I would bake cakes and sausage rolls but I have an 18-month-old toddler that I need to look after, as well as other household chores."

And the money keeps stacking up...

"We're spending £5 ($6.30) a day on his school lunch which really does add up. We have to get a variety of different ingredients and it's difficult to plan every day."

She felt the overall tone of the school was unacceptable.

"The lunchboxes are my responsibility so my husband has left it up to me but he also found the guidelines very condescending."

Keep scrolling for more school news, including why a boy was suspended for saving his classmate's life...