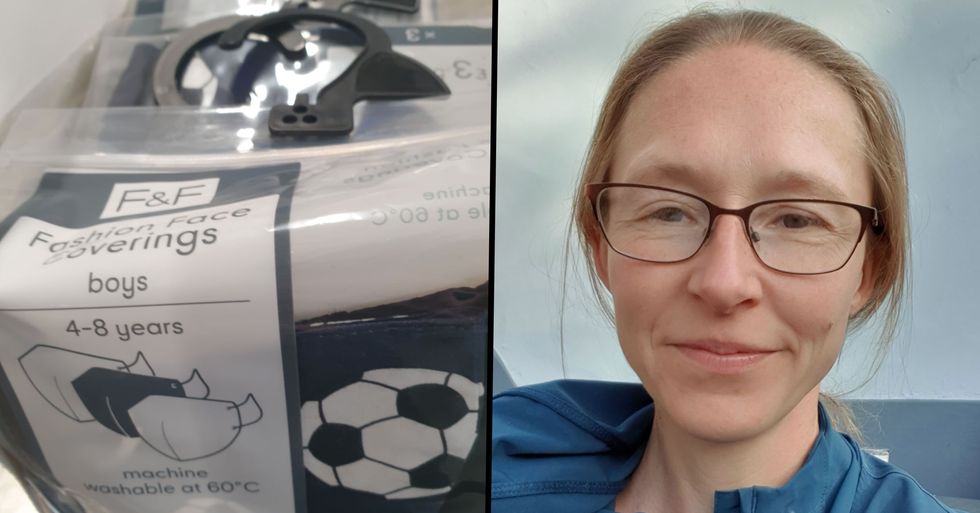 A mom has slammed a supermarket for selling face masks "specifically for boys."

When it comes to little boys and girls...

Many things are immediately decided for them, including what they'll like playing with and what they'll wear.

So little girls are often seen wearing pink and playing with dolls...

While boys are kitted out in blue and play with cars and action figures.

This has been the norm for decades now...

But where did these stereotypes come from?

Decades of research by the University of Maryland historian Jo Paoletti suggests that up until the 1950s, chaos reigned when it came to the colors of gender.

"There was no gender-color symbolism that held true everywhere," Paoletti told Life's Little Mysteries. Because the pink-for-a-girl, blue-for-a-boy social norms only set in during the 20th century in the United States, they cannot possibly stem from any evolved differences between boys' and girls' favorite colors, Paoletti has argued.

Things such as baby books, congratulations cards, birthday cards, clothing, and gifts are extremely influenced by the boy-girl color code. Can you imagine an "It's a Boy!" card in pink?

But now we're living in 2020, things are starting to change.

We're living in an era of gender fluidity and the LGBTQ+ community is bigger than ever!

Gender stereotypes are now being questioned...

And now that so many people identify as non-binary, meaning they don't assign themselves a gender, the whole "blue and pink" debate is now bigger than ever.

Why should little boys be expected to play with trucks and wear blue?

And why can't little girls play with cars if they want to and wear t-shirts with dinosaurs on them?

The stereotypes surrounding gender are starting to loosen slightly...

But there are still products for children out there that are painfully stereotypical towards gender and more and more parents are starting to put their feet down.

The most recent example comes from the United Kingdom...

And it's all to do with face masks.

Mom, Sarah Louise, was recently out shopping at her local supermarket when she decided to pick up some cotton face masks for her 2 children.

Her 9-year-old daughter, Mara, was shopping with her when they came across some patterned cotton face masks that were "for boys."

The packaging stated that the item is for boys aged 4-8 years old...

And the masks were printed with a football pattern. Keep scrolling to see them for yourselves...

Sarah took to Facebook to complain about the masks...

And she directly outed the supermarket in question. "Hi, I was in your shop in Long Eaton at the weekend with my family and we spotted these "boys" facemasks at the till. My daughter wondered what made suitable for her brother, but not for her. I had no good answer to give her and wondered if you could help," she wrote.

Speaking in an interview, Sarah explained her frustrations.

"My daughter raised her eyes and asked ‘why not for girls?'" she said. "She knew it was just a stereotype, which is a bit sad at 9-years-old. I think casual stereotyping like this is just a small reflection of a bigger problem."

Of course, Sarah's post caused quite a divide in opinion.

Many felt that the mom was being over-dramatic and that there are many more important things to be dealing with right now than a pack of face masks "for boys."

Many parents spoke out about their own experiences with gender stereotyping and how their own children dealt with it.

Here are the face masks in question:

Do you think that Sarah had a point by complaining about them? Or do you feel she has a point? For more on the subject, keep on reading to see why a mom called for all kid's clothing stores to be gender-neutral...