The photo was of Jameson smiling and covered in chocolate. | 22 Words 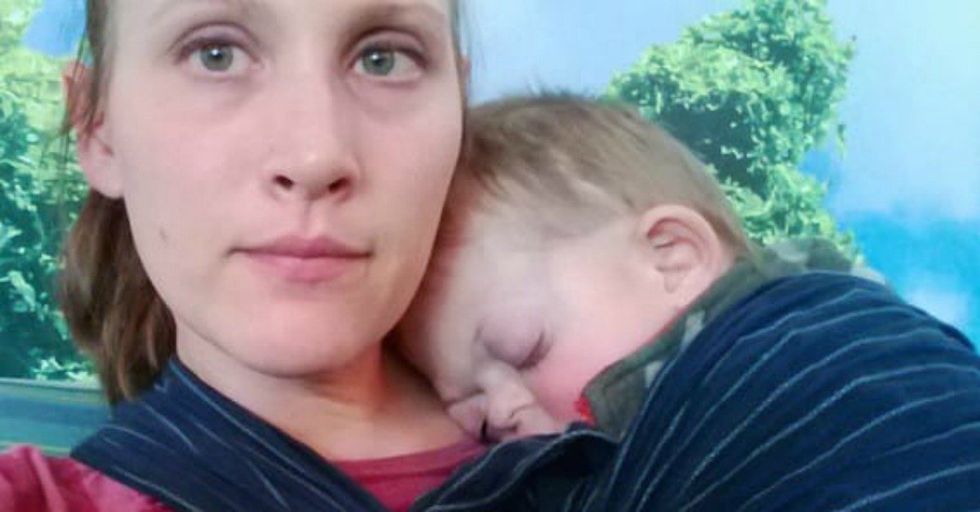 Mom Snaps a Photo of Her Son's Sweet Face. A Year Later, She Notices the UNSPEAKABLE!

Blogger AliceAnn Meyer recently posted a photo of her four-year-old son Jameson. Jameson was born with craniosynostosis and Pfeiffer syndrome. On a basic level, the condition alters the shape of the skull, hands, and feet. From the time Jameson was born, he has dealt with the symptoms of the syndrome—difficulty breathing, eating, seeing, and hearing.

After AliceAnn posted the photo of her little boy, an unidentified internet troll took the photo and made it into a meme.

The internet, as we all know, can be a cruel place.

The cloak of anonymity offered by the internet is just too tempting for some bad actors out there. They don't care about who they hurt and the internet provides them with a consequence-free playground.

Sometimes those bad actors go beyond the pale.

More than simply stealing an image for purposes of social media plagiarism, the internet can be home to vicious cyberbullying as well as pure thoughtless humor. This story is an example of the latter.

The lack of good taste on the internet can sometimes be astonishing.

The lengths people will go to in order to get clicks. It's truly unbelievable.

Meyer learned this the hard way.

After she snapped a photo of her son Jameson. She put it on her blog, just as millions of other parents do all the time.

What happened next will probably shock you.

Provided you have any semblance of conscience. Or basic human decency!

The photo was of Jameson smiling and covered in chocolate.

The image was altered and created into a meme— making Jameson look like a pug.

And provided a heartfelt - and heartbreaking - response on her blog. But that wasn't all she did.

Her story even made it to the local news.

"There is no way for me to know who did this,"she said in a blog post. "But for every post and share of this meme, I will do everything in my power to get it taken down."

It became AliceAnn's mission to have every photo of her son removed. She filed thousands of reports. The sad thing? Some of the photos had more than 5,000 likes and had been shared more than 3,000 times.

That's really difficult once a meme spreads throughout the internet.

But Meyer has the fact that this meme is obviously a breach of good taste on her side. And she's enlisting all her readers to help.

"In addition to reporting these photos as harassment and bullying," she said, "I personally filed claims for copyright violations as this photo was stolen from my published article."

“I could sit idly by and tell myself that there are cruel people out there and that’s the world we live in," she said. "But do not take my photo to degrade my child. If you are going to laugh and share this meme, I think you should know exactly what it is you are sharing and laughing at."

So, to everyone that "liked," shared, and posted that meme, his mother would like to introduce you to the child you find so funny. His name is Jameson. He is very real, and he was born with Pfeiffer syndrome.

She took action and she's trying to cancel out the abusive meme with images of her own. And she went on to provide a totally unnecessary apology for her tone.

“I hope my tone is not negative, if it seems that way I apologize, but I am a protective mother," she said. "I promise you that as hurt as I am that someone created this meme, I am not naive enough to believe there aren’t people out there who will mock and bully my child."

If you see the meme, don't share it. Report it or send it to AliceAnn instead. To read more of her story, check out her blog at Jameson's Journey. All of her direct quotes came from this post.

As for AliceAnn, she's still doing what she does.

Sharing pictures and stories of her FIVE sons, as well as her experiences as a mother.