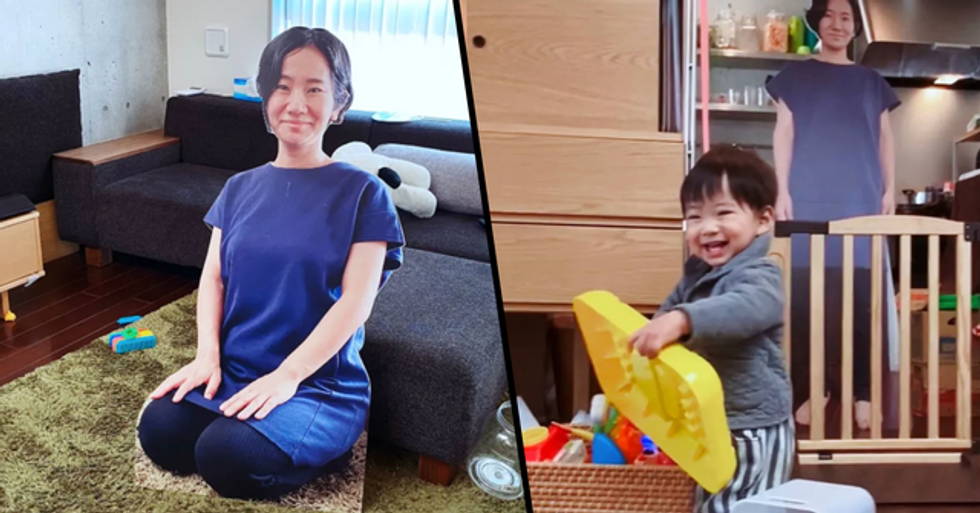 Well, one genius mom has now gone viral after she revealed her crafty little trick in comforting her toddler whenever she leaves the room... And it works! Keep scrolling to learn more about her inventive hack...

First time parenting is going to be hard for anyone to get used to.

The daunting feeling of being completely responsible for another tiny human is enough to send anyone around the bend.

Not to mention all the late nights and early mornings that begin...

The constant lack of sleep and the feeling of being exhausted.

And the late nights and lack of sleep aren't quite as fun as they were a few years ago.

The days when your late nights and early mornings were when you were stumbling in from the nightclub at 4 am are long gone, sorry to break it to you.

No, the feeling of becoming a parent is completely different from anything you've experienced before.

And actually, it isn't all bad.

The overwhelming feeling of love does outweigh the lack of sleep.

The strong protectiveness you feel overpowers the constant crying and lack of showers, trust me.

Ultimately, parenting is the best gift in the world.

And all the struggles are worth it in the end.

Any tips, tricks or hacks that any fellow parents have to offer will be welcomed with open arms.

The internet is awash with various hacks and tips.

And many people dedicate their social media accounts to sharing their parenting stories and helping other parents who are struggling.

Who shared his crafty "home-made rocking chair"... All this inventive Dad used was a basket and some rope. Simple!

Like the one above, many of these online tips revolve around stopping a child from crying...

Because let's be real, the worst part of parenting is your child simply not stopping crying.

The presence of having their mom or dad nearby can bring a tremendous amount of comfort and reassurance to a child.

But parents don't often have the time to spend hours comforting their child...

Sometimes nap time is the only free time to clean house, do the chores, cook dinner or have a bit of me-time.

Parents have to come up with inventive ways of distracting their children.

And one mom has gone viral for her amazing idea...

Which tricks her child perfectly while she's busy doing her chores.

The most realistic cardboard cutout you ever will see. Fuki Sato, from Japan, created the life-sized cardboard cutout replica of herself to fool her young son into thinking she was still there.

She even got one printed in a different position...

This cutout depicts Fuki crouching on the floor as though she is about to play with the youngster. Complete and utter genius, no? Though maybe her child will twig that it's an inanimate object when it doesn't move after a few hours...

Here we can see Fuki's son giggling away contently, clearly unaware that his mom is simply an inanimate, cardboard cutout.

In the video above, the trick seems to be working well...

And the toddler can be seen gleefully playing with his toys, all while contently thinking that his mum is nearby. The dad, who posted the video, captioned the clip: "It's hard because my one-year-old child cries as soon as mom disappears. As a countermeasure, I experimented with what would happen if I set up a 'life-sized panel mother'."

The toddler was never left fully unattended. His dad explained that the boy was never left alone and he was always there to supervise his son playing, and Fuki was able to pop in and out every twenty minutes to check her child was ok when he was turned away.

Maybe the secret to easy parenting is simply a cardboard cutout?

Okay, there's no such thing as "easy parenting"... But there are certainly many nifty tricks like this one that can help you along the journey! As we all know, Christmas is a tough time to be a parent - With the excitement of Father Christmas and lots of candy, kids can go a little crazy. Keep scrolling to read about one mom's handy trick to stop her children from begging for presents...