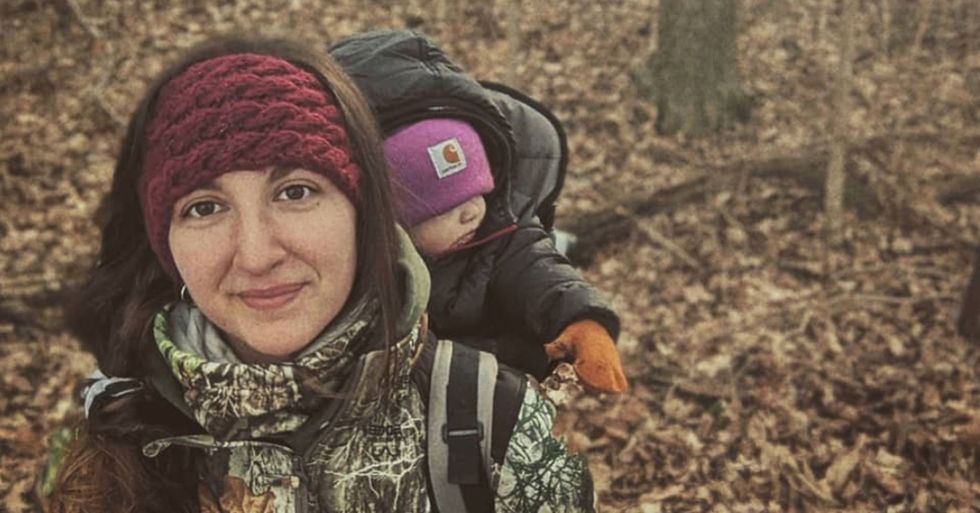 A mom has been forced to defend herself after being slammed for taking her two-year-old daughter hunting with her.

After seeing her pictures, people are furious...

Hunting is still legal in many U.S. states.

And it is still very much a popular sport.

Many people enjoy taking part in hunting. Especially here in the States, these individuals simply ignore the protests that demonstrate how hunting is cruel and inhumane.

In fact, social media platforms have been plagued with snaps of dead animals.

Some trophy hunters are far from ashamed, taking to social media to show off their kills.

As you can imagine...

These people tend to get a lot of backlash.

And this week, one mom who enjoys to hunt has been forced to hit back at trolls...

Now, of course, the hunting itself is enough to get a lot of criticism online, but trolls are slamming this mom for another reason too.

Because she takes her 2-year-old daughter hunting with her.

This is Beka Garris.

The thirty-one-year-old stay at home mom from Ohio hunts animals in her spare time.

She's been hunting since she was just 10-years-old.

And now, she wants to pass down her love for the sport to her 2-year-old daughter, Isabella.

And very quickly began to attract backlash for her controversial posts.

Especially since many of them feature her daughter...

Beka says the pair usually set out before sunrise in the hopes of bringing home a 200-pound whitetail deer to feed the family.

As you can imagine...

But, Beka is determined to pass down her family tradition.

And so far the pair have managed to hunt rabbits and deer.

After her posts gained attention, several people slammed the mom for introducing her daughter to the controversial sport.

Many feel it's completely inappropriate for her to be exposing her daughter to this kind of practice.

But Beka has been quick to clap back at the trolls.

And she refuses to apologize.

"Every parent has the choice to raise their children how they see fit."

"Hunting with children of all ages is something our ancestors did all of the time. It's not something that should be seen as 'shocking'," she continued.

She tends to just ignore those condemning the practice and says her daughter "loves" accompanying her.

"I choose to ignore what people say. The fact that my daughter loves accompanying me only strengthens my decision to take her. We love spending time in the outdoors learning about nature."

Hunting was a huge part of Beka's childhood...

"My dad is an avid hunter and so he started taking me along when I was 10. Hunting and fishing became a huge part of my childhood. Now we go at least several times a week during open season spending a few hours in the woods."

"Hunts with my daughter can be shorter than if I went alone as I want to make sure she's enjoying herself and stays comfortable in the weather."

She thinks hunting will allow her daughter to create a stronger bond with nature.

"Exposing a child to the outdoors and hunting at a young age will only help them create a stronger bond with nature."

She also thinks hunting should be normalized.

"They will be raised thinking these activities are normal - as it should be.

She says it all comes down to teaching her child where food really comes from.

"I refuse to apologize for teaching my child that food comes from the woods, water, and the garden. "It's nice knowing where your food comes from and knowing the time and effort I put into the hunt brings a certain satisfaction," Beka continued.

Beka also claims that wild meat is "more delicious and better for you."

"Wild game is something you rarely find in a grocery store and it's both delicious and better for you. Conservation plays a big role in why I hunt too."

But, she doesn't just eat the animals she hunts...

"We field dress, skin, and cut up our animals. I'll save the skull and some bones to bleach and create artwork. Feathers and hide are then kept to create a wall hanging or clothing. Meat is cleaned, cut up, and then frozen for future meals."

She explained that displaying the animal in your home is a "sign of respect."

Some people may not understand displaying what we kill in our home but this shows respect to the animal. By creating something you can look at and remember, you get to appreciate its beauty."

By continuing to post on her Instagram, Beka hopes to inspire other parents to take their kids hunting.

"Don't expect all hunts to be successful but what matters are the great memories you take away every time. I hope to have inspired both moms and dads to include their children more in the outdoors." What do you think? For more like this, scroll on to read how trophy hunters killed a zebra and posed with it on Instagram...