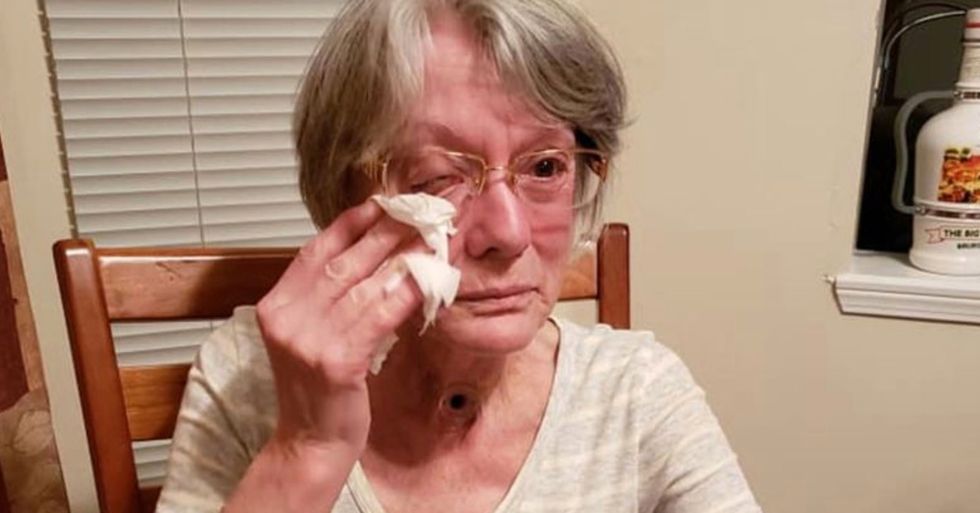 An elderly mom was recently told to leave her local bingo hall because she couldn't cover up the tracheostomy hole in her neck that helps her to breathe.

This poor woman has already been through so much... do you think that she should have been turned away during the pandemic?

We are living in an era of facemasks.

As we begin to slowly ease out of the coronavirus lockdown restrictions, extra measures are being taken to stop that inevitable second spike - and that includes making facemasks mandatory in most public spaces.

As you will all know, it has become compulsory to wear a face mask in all public spaces in many parts of the world.

The coronavirus death toll is alarmingly high so, of course, extra precautions are being made in order to avoid that number raising.

Health experts have been stressing their importance.

Healthline describes facemasks as "crucial in the fight against the pandemic."

So it's not hard to see why many establishments are now making face masks compulsory...

With medical exceptions, of course!

But sadly, not all establishments have been treating individuals with medical conditions fairly...

And one woman in Canada was reduced to tears when her local bingo hall refused to let her in... all because she couldn't cover up her tracheostomy breathing hole.

Joe Gilbert, who is from Ontario, Canada, recently took his sixty-seven-year-old mom to her local bingo hall.

Elaine Arbeau has sadly been battling many different types of cancers over the last twenty years and now, she is living with lung cancer.

As a result of her cancer, poor Elaine underwent a tracheostomy.

A tracheostomy is a medical procedure that involves inserting a small tube directly into a person's windpipe that allows air into the lungs and therefore, allows them to breathe.

Many people live good and fulfilled lives with a permanent tracheostomy tube fitted in...

And even though it prevents them from talking properly, it allows them to breathe as normal - which is how Elaine is living at the moment.

But when she arrived at the bingo hall recently, she was in for a nasty shock.

"My mom doesn't go out much unless its to play at a casino or bingo hall these days for her enjoyment with her friends," Joe wrote in a lengthy Facebook post. "But with COVID happening she was homebound for 6 months before they opened up a bingo hall. Like most people, she too was excited to go play and see her friends again. However, when she went to Delta Bingo Pickering, she was told to leave by management if she didn't cover up the hole on her neck."

Elaine tried her best to explain that she physically couldn't cover up her breathing hole, or else she wouldn't be able to breathe.

"Well, she explained that was impossible to do so. That's how she breathes. But nevertheless Lucy the operations manager escorts her out to the parking lot. In the parking lot, Lucy realized how upset mom was and said it was ok to go back in. My mom was beside herself and floored... My mom left."

Following the upsetting incident, Elaine went on to complain to the establishment's management and she was told she was allowed to go back.

But when she next tried to enter the bingo hall, the exact same thing happened. "Even though she tries to explain what she learned she was over-talked. My poor mom has no voice so I'm hoping by getting this out there many people will join me to give her one. This should never happen to anyone in my mom's position," Joe wrote.

Joe believes strongly that his mom was discriminated against.

"What they did was wrong," he said to CTV News, "The hole can’t be covered because that's how she breathes, she doesn't breathe through her mouth or nose." And it's safe to say that many people agree with him.

However, a divide in opinion was created by Joe's post...

And many people started claiming that Elaine can actually cover up her breathing hole and that she shouldn't be out and about during a pandemic anyway.

Speaking to CTV News Toronto, Delta Bingo CEO Cam Johnston said he will take a "hard look" over the case...

But he said people who can't wear masks shouldn't be visiting their establishment at this time.

We hope that Elaine is doing okay and that she can be reunited with her friends very soon.

For more stories of discrimination, keep scrolling to read about the disabled influencer who hit back at trolls who were using her face to scare their children...