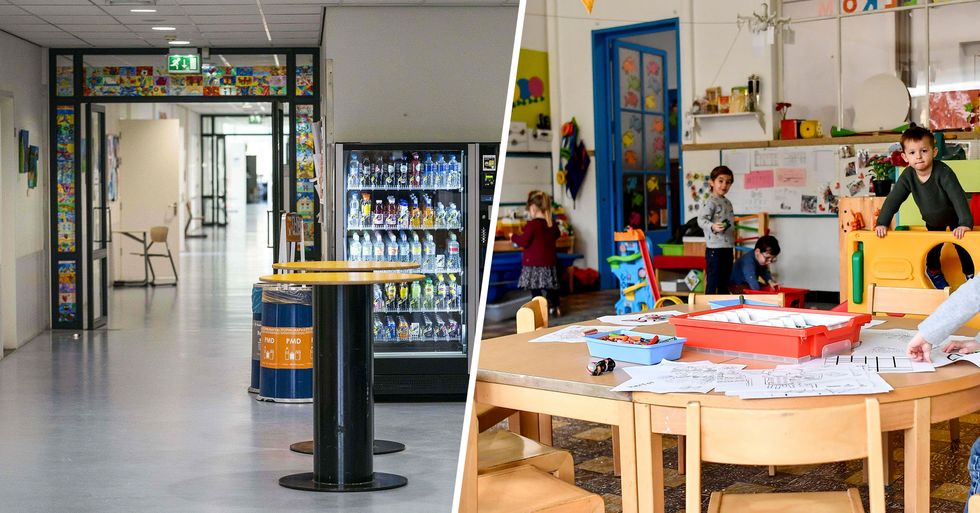 Schools in the U.K. for the most part, remain open, but some think this could be causing a bigger risk to family members that are vulnerable to the virus.

When one mom took the initiative to take her son out of school to protect his father, she didn't expect this to happen!

Over 100,000 people all over the world have now been infected with the virus...

189,758 to be precise. And, devastatingly, a staggering 7,518 more have been reported to have died from the illness.

Since the first COVID-19 patient in Washington, there have been 5,243 more confirmed cases across the country and ninety-four deaths.

But despite the panic, schools remain open.

However, some people think this is a bad idea, especially when their kids are coming home to high-risk family members.

One British mom took her eleven-year-old out of school.

But now faces a fine from the school, even though it was to protect his immunosuppressed father.

She's been warned by the headteacher she could be hit with a fine.

The mom - who wants to remain anonymous - said she wrote a letter to the primary school informing them of her decision to safeguard his father, who is on injections that suppress his immune system.

She received a stock letter in return.

Ireland: Schools closed since last Friday. UK: Take your kids out of school and you risk being fined, even if you… https://t.co/VGYbriV4cd
— Gerry 🇮🇪🇪🇺 (@Gerry 🇮🇪🇪🇺)1584371038.0

The headteacher's letter noted that the absences “will not be authorized," and that each parent could be subject to a £60 ($73) penalty charge.

It had to be paid within twenty-one days.

Meanwhile, parents in the uk are still being told they’ll be fined if they take their kids out of school 🌚 https://t.co/1gLib7Wsvx
— The Mighty Pting (@The Mighty Pting)1583945079.0

The letter said: “If the penalty is not paid within the timescale the penalty will increase to £120." This is the equivalent of $145.

The woman lives with her family in Essex, England.

> Keeping schools open whilst advising against mass gatherings are not actions of a govt wanting to delay or suppre… https://t.co/mcKNSMhMvs
— portia lawrie 💙🥀 (@portia lawrie 💙🥀)1584450130.0

She is calling for all  “unauthorized absence" penalties to be suspended due to the current circumstances, and that tougher measures needed to be in place to tackle the coronavirus in the U.K.

These tougher measures will be discussed in Parliament this week.

She added: “Schools have discretion in how they respond. It's especially important now that schools take a view based on individual circumstances and employ a bit of common sense."

Geoff Barton, the head of the Association of School and College Leaders, said:

"The most immediately pressing challenge is the difficulty in keeping schools open with growing numbers of staff ha… https://t.co/GQgOgR8KZb
— Geoff Barton (@Geoff Barton)1584397142.0

Schools shouldn't be held accountable for attendance figures plummeting due to the current situation.

She urged the school to be more proactive in their response to the coronavirus after parents, pupils, and teachers had traveled abroad over half term.

Her partner is an at-risk individual.

He has a condition called psoriatic rheumatoid arthritis and takes TNF (tumor necrosis factor) blockers to suppress the immune system making him highly susceptible to viruses.

“If our son picks something up and brings it home, he could be completely stuffed."

She expressed her disappointment with the school.

Saying that she and her family, “didn't feel the current response and guidance was adequate and we would be removing our son from school until we knew how this was going to pan out".

Other parents in the area have taken the same protocols.

Making the decision to take their children out of school over fears that the disease might spread to loved ones.

Many parents have taken to social media to vent their frustration.

With most saying they shouldn't have to face the threat of being fined when they're doing what they can to protect the health of their family.

A spokesperson for the Department of Education said...

“The current advice from Public Health England (PHE) is that schools should remain open unless advised otherwise. It is for headteachers to decide whether an individual absence is authorized, but where schools are open and pupils are not unwell and have not been asked to self-isolate by PHE, we would expect them to attend school as normal."

A source said it was a fast-moving situation.

Guidance for families could change as the outbreak develops. Should high-risk families have the added burden of receiving fines for protecting their loved ones? It just doesn't seem right.