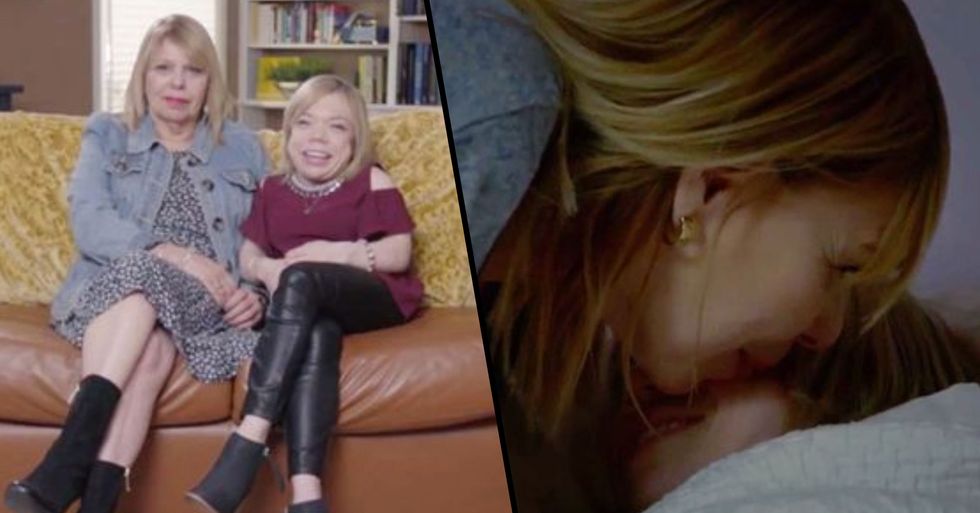 Eyebrow-raising footage of a mom who wakes her daughter up by pretending to be a dog and licking her has left the internet completely stunned. Although, licking is far from the only bizarre part of their routine...

Many moms and daughters have a close-knit relationship...

Of course, while it's obviously nice to be close to your parents, there's certainly a line... not many people want to be completely smothered.

But not everyone agrees...

Some people have a far closer bond to their mom's than most.

A new show called sMothered is highlighting mom and daughters that go to extremes.

From dressing identical to getting matching plastic surgery (yes, really), these mom and daughter duos are certainly unique.

As well as the quirks that come along with them.

But there was one particualr mom and daughter duo that really got viewers talking...

The pair have some very bizarre routines that are sure to make your eyebrows raise.

Viewers have been left well and truly stunned after learning more about the pair.

Alena, who has an enzyme deficiency, was adopted by Marcia when she was just a toddler.

Alena doesn't let her health slow her down.

Plus, mom Marcia is always on hand to tend to her every need.

Despite Alena now being twenty-one, the pair remain as close as ever...

The duo confess to being completely inseparable and doing everything together.

And this starts right from the minute they wake up in a morning.

Now, most people's morning routine consists of perhaps having a scroll on Instagram, making a coffee, putting on the TV, reading a book... you know, that kind of thing.

But not Alena and Marcia.

This pair have a more unconventional morning routine together.

To start the morning off, Marcia wakes her daughter up in a rather, well, unusual way...

... she licks her face. Yep, you read that correctly.

The strange ritual began when Alena started asking for a puppy.

But Marcia wasn't able to buy one, instead opting to pretend to be a dog herself to keep her daughter happy. Scroll on to watch the clip for yourself...

Marcia opened up more about her puppy antics on the show.

"She kept pestering me for a puppy and I couldn’t get her a puppy, so I turned into the doggy. Alena tastes pretty good and all sweet, I just want to eat her all up," she explained.

But this is far from the only unusual part of their morning routine.

Once Alena is awake, she chases her mom around the house.

And when Alena eventually catches her mum, it’s her turn to play puppy.

"When I catch my Mamma I do all my kissy-poos and I kiss her all up. She’s very kissable," she said.

The chasing began in childhood, as a way to build up Alena's stamina.

The routine ended up sticking, even into adulthood...

"It was really a good thing to help her grow and it just continued. "Some people don’t agree or they wonder what is wrong with her. I love the idea as she’s growing up of being able to do all those silly things."

Marcia admits that it's getting harder as Alena gets older...

"It’s getting a little tricky as she’s getting older, but still do all the same antics and we still play the same games and we have fun."

The pair are also quick to shake off any criticism thrown their way about their morning ritual.

They both admitted to simply laughing at those who call their bond "strange." "We don't have a strange bond. However, we do have a strong bond. Having fun and acting silly at the appropriate time is just between us," they said.

After watching the show, people had some strong reactions, to say the least...

Many hailed the pair as "creepy."

Their morning ritual certainly didn't go down well with viewers.

Many raised this point.

Marcia licking Alena up like a puppy lasted for an inordinate amount of time, and it feels like their relationship… https://t.co/bhYYhroNmH
— Joe Scavella (@Joe Scavella)1590373337.0

For more like this, scroll on to find out about a very different mom, who takes her daughter hunting with her...