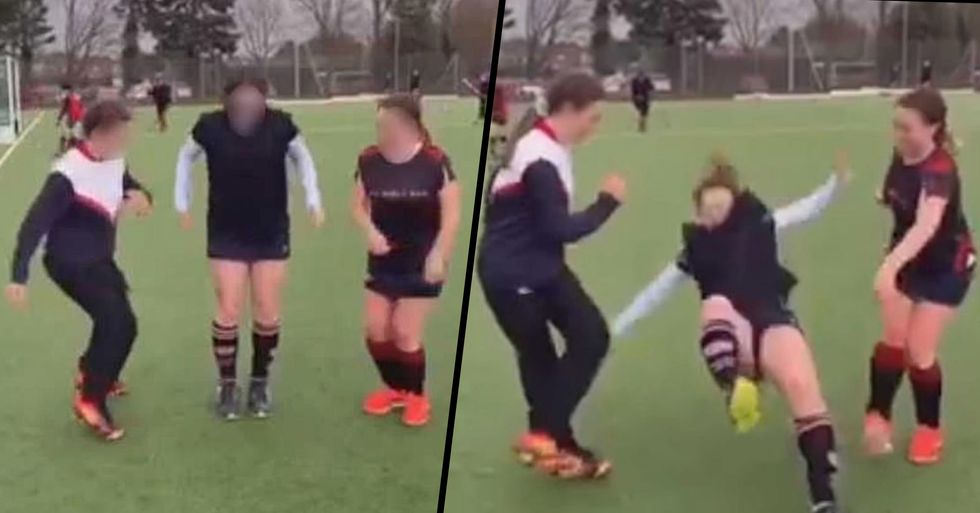 It's clear that these challenges aren't for the weak-hearted. But one that has recently taken the internet by storm looks potentially even more hazardous than the rest and it's called the "Skull Breaker Challenge." One particular mom found out the after-effects of the trend when her daughter was involved.

Keep reading to find out the consequences of such a dangerous challenge and to watch the video for yourself.

Recently, a whole new trend has been taking over and it is one of the most dangerous yet.

It is known as the "Skull Breaker Challenge."

And it involves kicking inwards at an unsuspecting person as they jump up in the air so they fall onto the back of their heads.

It can cause serious injuries to the head, neck and wrists.

2 of them decided they would subject the third to this prank in front of an audience and because she had learning difficulties, she was deemed an easy target.

And in a similar case, a young boy was left with some serious injuries.

Valerie Hodson, a concerned mother posted this warning on Facebook after her son was hospitalized when he was taking part in the challenge.

She warned other parents and children:

"On Wednesday my son was asked to do a jumping contest with his 2 friends, when he jumped up, the 2 boys kicked him, as hard as they could, so his legs flew out in front of him. He landed hard flat on his back and head, as he struggled to get up he lost consciousness, he fell forward landing on his face."

And his injuries were pretty serious...

"The school monitor ran to his side, all the while the 2 boys were snickering and laughing as his stiff unconscious body lay on the asphalt."

She clarified that her son had no idea that the boys would do that to him.

"Fast forward at the hospital, he has a head injury, stitches in his face, severe cuts inside his mouth and 2 front teeth I have to keep on eye on."

A spokesperson for TikTok recently spoke out about the issue.

They told Yahoo News that the number one priority of the platform is to keep everyone safe and they do not promote this kind of behavior. The "breaker" part of the challenge is being replaced with "saver", which is an alternate challenge used to replace this one. If you want to read more about online challenges, then keep scrolling.

Now, yet another child has fallen victim to this TikTok stunt.

A teenager was rushed to hospital last month after performing the dangerous viral challenge.

After landing awkwardly on her neck...

The teen, named Sarah, has been left with serious spinal injuries.

A photo surfaced of the teen in the hospital with a neck brace on.

She later required special treatment at the spinal unit at Nuffield Orthopaedic Centre in Oxford, UK, where she was diagnosed with ligament damage and potentially broken neck bones.

Her terrified mom took to social media to warns others about the challenge.

She shared footage of the moment the injury occurred along with the caption: "Please please if you have teenagers doing TikToks.

"Do not get them involved in this. I'm sitting in A&E with my daughter with a severe spinal injury."

And of course, her post sparked an influx of concerned comments.

"Omg I saw another post on Facebook the other day with a little boy who had been badly hurt as a result of this. I hope she makes a quick recovery," wrote one user. "Jane oh my god, hope everything is going to be okay. Keep us posted. Sarah sending you so much love and many hugs right now," wrote another.

Watch the terrifying clip below:

Kids are getting seriously hurt. The amount of injuries surfacing serves as a stark warning to stop these idiotic "challenges" before things take an even more sinister turn.