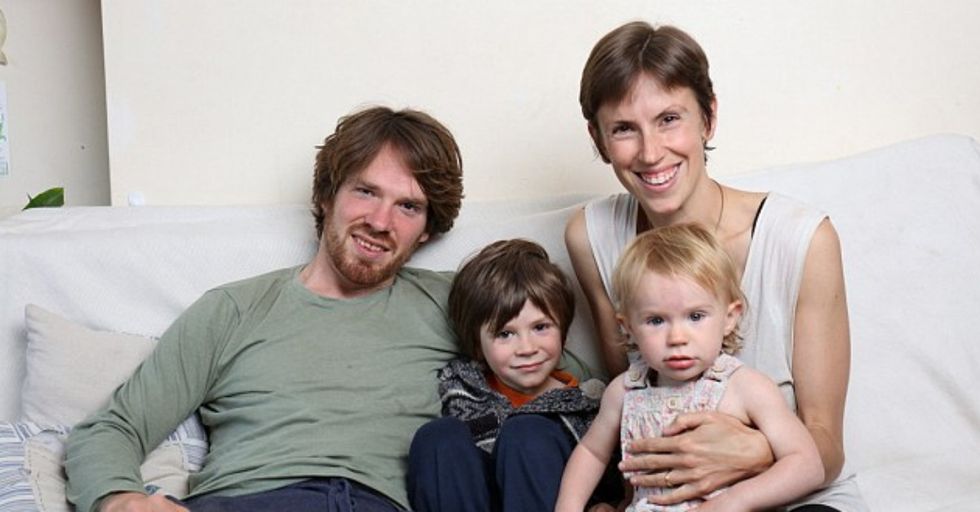 Adele Allan and her husband Matt raise their children as what many like to call “free-range" kids, meaning they don’t go to school, don’t get vaccinated, and don’t have any rules.

The mother also continues to breastfeed her five-year-old son and one-year-old daughter. Adele believes that by raising her children out of “the system," and letting them do what they please they’ll be more in tune with nature and themselves.

When Adele, a writer, became pregnant with her son, the couple's controversial methods felt completely natural to them.

"Off-grid is moving towards self sustainability and being a bit more free range and less institutionalized," she said. “Traditional parenting methods rub me the wrong way," she continued. "The cry out method for the young babies… the baby has still got that in their DNA from when they used to be hunter-gatherers and they need to feel safe."

Adele gave birth to both her children completely unassisted and with no medical intervention with only her husband Matt by her side.

They also decided to have "lotus births" meaning the placenta and umbilical cords were not surgically removed at birth. Instead, Adele carried the attached placenta in a cool bag — scattered with salt and rose petals to disguise the smell — around with her until it fell off naturally, after about six days.

Adele feels very strongly about full-term breastfeeding and her five-year-son still regularly feeds from her.

"Ulyssess does still nurse from time to time," she said. "Since the baby came along it has decreased rapidly and we had to come to a mutual understanding that it needed to graduate down a bit, but then I wasn't willing to say 'no you need to stop now.'" "It's something that's just as natural as a hug is, it's a connection."

Adele believes that all ailments can be treated naturally, and things like conjunctivitis can be cured with the enzymes from breastmilk and oils.

She said that if she were to have cancer, even then, she wouldn’t seek medical intervention — even for her kids. Those kids don't attend mainstream school and instead spend their days outside among nature, learning about plants. "We basically spend lots of time in nature," Adele said. "It's more important to us for them to interact with animals and plants and learn about the environment than it is for them to have big sets of plastic toys." "Ostara really likes to play with woodlice and in the mud," she continued. "In the park, there's a big herb patch and she likes to pick and eat the mint leaves. Already at this young age she is thinking about what she can pick from nature and eat."

The parents accept that reading and writing are imperative life skills, but don't want learning to be forced upon their children and five-year-old Ulysses can only recognize basic letters and numbers.

"I don't have an issue with that," Adele said. "There is no need for him to be able to read and write at this age anyway." 'They see letters on drain covers and numbers on signs and then learning happens as a consequence of just being out in the world," she added, "rather than it being forced upon them in a classroom that is not particularly inspiring." Adele and Matt are adamant, despite negative comments, they would not raise their children any other way. "I have got such a fantastic connection and bond with both of them and they know who we are — more than just being Mum and Dad —it's a much deeper connection than that," she said. So what do you think? To each their own or are they bat crap crazy?