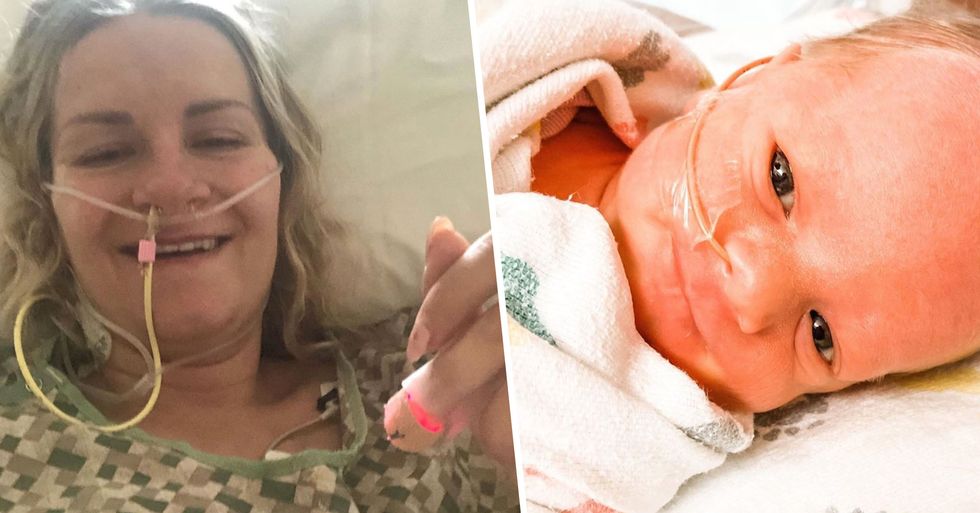 Today in 2020, having a baby is now more dangerous than ever thanks to the global pandemic crisis that has swept across the globe.

But one mom who was infected with the deadly virus has defied all the odds after she awoke from a coma to meet her healthy baby girl...

And without a doubt, we have become the hardest hit.

President Trump's goal of having the nation "opened up and just raring to go by Easter" was a mere dream.

New York is the hotspot for coronavirus cases here in the States...

According to the BBC, New York now has more coronavirus cases than any single country outside the US.

It's especially worrying for those due to give birth anytime soon...

Any new mom and baby who are spending time in hospital are immediately at a higher risk...

Which is the last thing you want for a newborn.

But one mom has recently defied all of these odds.

This is Angela Primachenko, a twenty-seven-year-old respiratory therapist and mom from Vancouver, Washington.

She was recently preparing to give birth to her second baby...

But disaster struck when she started running a fever. "2 days later, it's been a fever and she was like, 'I'm pregnant and with [the virus] going around, I'm just going to go to the hospital to get myself tested,'" her twin sister, Oksana Luiten, told KGW8.

On March 24th, Angela tested positive for the virus when she was thirty-three-weeks pregnant.

Whilst her husband and her 11-month-old daughter were tested negative, the young mom quickly began to deteriorate and she was growing weaker and weaker by the day - which ultimately lead to her being put into an induced coma.

But whilst Angela was in her coma...

Little Ava was brought into the world 6 weeks early.

"Obviously nobody expected that I was going to get that sick, so no, absolutely not, I did not expect to deliver my child,'' the mom told Today after it was all over. "After all the medication and everything I just woke up and all of a sudden, I didn't have my belly anymore. It was just extremely mind-blowing."

But even though Angela is now quickly on the mend, she is yet to hold her baby girl.

Ava will need to test negative for a further test before she can leave the NICU.

But the family is just relieved that their little girl is doing okay. "That even in the hardest days and the hardest times that there's hope and you can rely on God and people and community," Angela explained. "The amount of community and people that were praying for me is just unbelievable. I was blown away, and I'm so incredibly thankful."

Angela and her husband have set up a GoFundMe page to assist with their staggering medical bills.

"All we want is for Angela to be well, some have asked if there is anything they can do to help, prayers and financial support would be so helpful," the page reads. "Hospital bills are crazy and Angela and David are small business owners so their insurance does not cover most of her stay. I am praying Angela and David will not even have to worry about that Any support is huge, and if we cannot reach you personally to thank you,  we pray the blessings of God to reach you and your family."

We wish Angela a speedy recovery and we hope baby Ava will be able to be at home with her family very soon!

For more on the pandemic, make sure to keep scrolling...