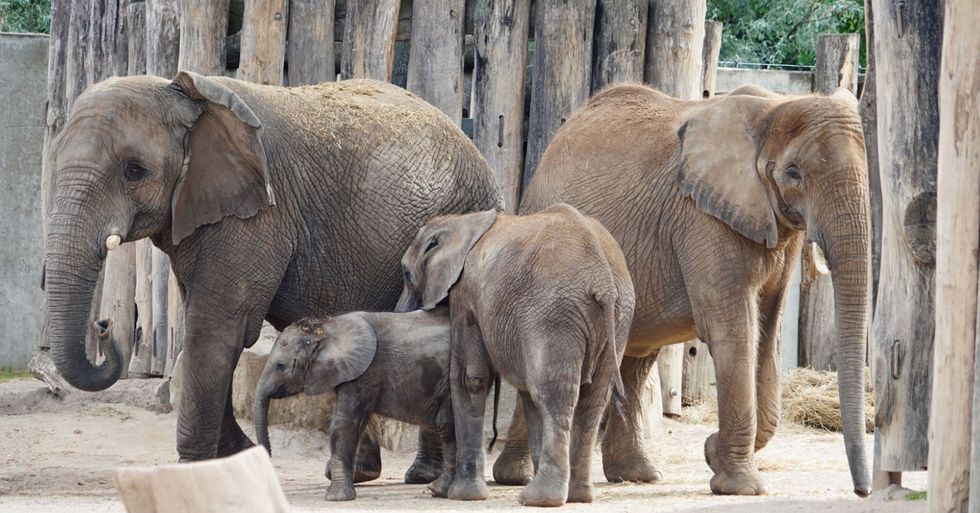 Moment Elephant Touches Trunks With Her Daughter and Granddaughter After Reuniting

An African elephant has finally reunited with her daughter after being separated for more than a decade, and the photos prove that an elephant never forgets.

Keep scrolling to see the heartwarming photos for yourself...

With deep family roots and strong emotional bonds, they are far more superior than we give them credit for.

And they are very much loved and respected all across the continent.

As a result of human activity, the African elephant is now listed as vulnerable by WWF.

The first is poaching - Like the Asian elephant, African elephants are relentlessly poached for their ivory tusks.

Elephants are usually at the top of a tourist's list, and locals have been cashing in on the exploitation of these animals for decades now.

Sadly a lot of Elephants are forced to perform.

These elephants are trained and often beaten into submission, which slowly chips away at their souls and characters.

There are so many national parks and zoos that provide these elephants with the environment and care that they deserve.

The Bergzoo in Halle is one of them. This is where Pori, the thirty-nine-year-old elephant was moved to after spending years at the Berlin zoo.

She was finally reunited with her nineteen-year-old daughter Tana, after twelve years apart.

She also met her granddaughters; Tamika and Elani for the first time.

Resulting in the best reunion pictures.

Pori was born in 1981 in Zimbabwe and was later brought to the Magdeburg Zoo in Germany.

She lived there from 1983 to 1997, after which she was sent to Tierpark Berlin to breed.

The zoo shared the moving image of the pair reuniting after so long apart.

And it's true what they say, elephants always remember.

Female elephants tend to remain with their mothers for life, which is why this is so sweet.

The zoo brought the family together as part of a program to bring herds together in captivity.

The elephant house is currently closed to visitors in order for the elephants to get comfortable with their surroundings.

However, visitors can see the elephants in their outdoor area.

Over the next few days, Pori will be getting accustomed to sharing the area with her daughter.

The Zoo director, Dr Dennis Muller, said: "Pori's arrival in Halle is an important step in modern elephant husbandry." "In the future, all elephant herds in European zoos should be cared for in such natural family structures. Today we have come a great deal closer to this goal."

This is all part of the zoo's conservation breeding program.

Allowing experts to get a deeper understanding of herd compositions and their moves in the wild. Which is essential in the survival of the species.

Watch the adorable video below...

Keep scrolling to find out why tourists were being told not to ride elephants when visiting Thailand...