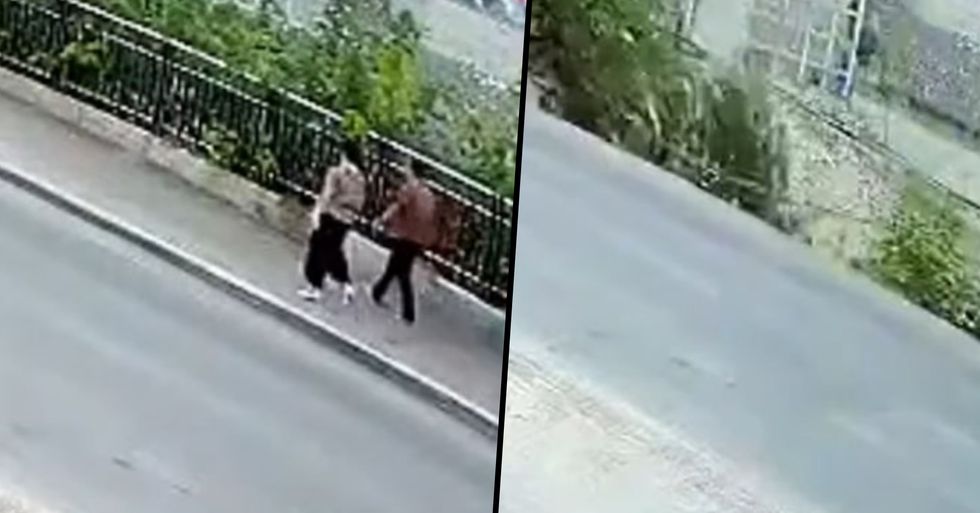 There's something about a scary video that just makes us feel alive! And one that's gone viral this week might be one the best yet. A huge sinkhole opening and swallowing you whole is truly the stuff of nightmares.

There's something thrilling about a near miss.

Flirting with danger but facing none of the consequences is the best of both worlds, in a way.

Nothing like nearly being smacked with a ball to get your heart pumping - but with none of the pain.

But the scariest near-miss of all?

Well, that would have to be any involving a vehicle - because the stakes are just that little bit too high.

And that's what makes the relief so palpable.

And one recent video makes for truly horrendous viewing.

The world has a surprisingly huge appetite for these sorts of videos - who knew?

And this video is particularly shocking.

Because it truly feels as though it could happen to you...

It involves one of the scariest phenomena in the world.

A sinkhole is defined as "a depression or hole in the ground caused by some form of collapse of the surface layer."

They can appear totally out of the blue, like something out of a sci-fi movie.

Which makes them horrifying to see.

One minute, everything's fine. The next, gone.

The current video to take the internet by storm?

It was captured on CCTV in southern China.

It was taken in the Wulong District of Chongqing.

And shows what looks like a regular road approaching a bridge.

Two pedestrians walk along the sidewalk...

And are suddenly completely swallowed up by a sinkhole.

People rush out to see what just happened.

Everyone is (understandably) terrified.

Here's how the video starts.

Because what happens next will send a chill down your spine.

The ground seems to just disappear beneath their feet.

Within a blink of an eye, both pedestrians are gone.

This makes us feel physically sick.

Perhaps this isn't as rare as we'd like to believe?

Don't watch this if you scare easily!

Luckily, the two are reportedly ok.

After being rescued by firefighters, they are injured but expected to make full recoveries. Fancy another absolutely chilling video? Scroll on!