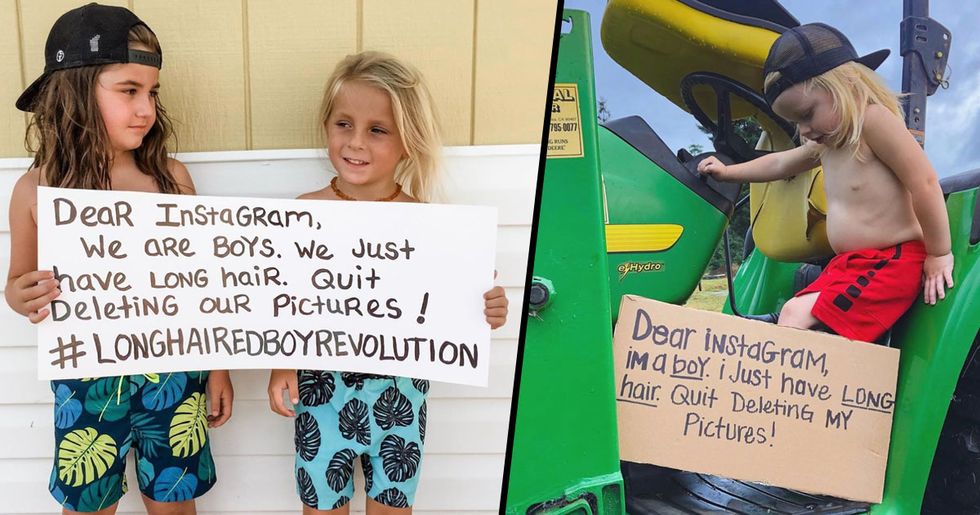 For a long while, we've all been well aware of Instagram's policy on nipples: they have no place on the photo-sharing platform. But we are also well aware that this policy only exists for female's nipples. The posting of male nipples should be a-okay according to the rules.

This has caused moms and dads across the world to flip their lids. The hashtag, #longhairedboyrevolution, has been causing waves for weeks.

Little boys often take their tops off in the sunshine.

I can understand the frustration of parents posting innocent photos of their little boys and having them removed. Not everything has to be considered sexual, right?

Parents are hitting back.

Using the hashtag, #longhairedboyrevolution, parents are posting photos of their long-haired little boys holding up signs, standing up for themselves.

The signs carry similar messages, all attempting to alert Instagram to the fact that, despite their long locks, they are, in fact, males.

It seems to me that there isn't actually a team of people who have the arduous job of trawling through Instagram searching for topless snaps.

It seems unlikely that the algorithm will be able to read the placards stating the gender of these children.

Can boys only be boys under certain terms and conditions?

Those conditions being that they have short back and sides...

Should any topless child be censored?

I mean, frankly, I don't think that any child should be sexualized in this way. When I was a kid, I was a massive tomboy and always had my hair cut short. I also went around all the time without a top on. Male or female, what does it matter? Shouldn't all kids be treated equally?

To prove my point, see above a photo of me taken circa 2005. Now I look pretty boyish, no?

The idea that, if Instagram had been around when I was a kid, a photo of me would be deleted if I had my top off doesn't seem fair. As much as I can see the frustration of parents with long-haired sons, I don't think that it's fair that little girls are also being persecuted.

Gender is a construct.

Instagram's censorship of nipples has been an unfair issue for a long time. I mean, of course, no one wants to see Instagram become a dodgy site, but doesn't context count for anything?

The censoring of kids is dumb.

A picture of a kid at the beach shouldn't need emojis covering their chests...

With the sheer amount of parents complaining...

Now, normally, when people say that, they tend to be bigoted racist, sexists, etc. Kind of like the exclamation equivalent of when people start an offensive statement with, "I'm not racist, but..." That being said, in this case, political correctness really has gone mad.

Parents are outlining what they want.

The mom of this little boy, Noah, posted on Instagram, writing: "Blanket algorithms or auto robots are not the answer. I understand the need for a monitoring system to be in place but deleting family photos, accounts, and freezing people from accessing their accounts is not right."

No one wants to lose precious family photos.

Long hair, short hair, it shouldn't matter. For families, Instagram can be like a virtual photo album, full of special memories that may well not be saved elsewhere. To have some outside party dictate what photos are deemed appropriate or not doesn't seem fair.

Sort out your guidelines!

Frustrated parents are trying really hard to get Instagram's attention. With photos being deleted because they don't meet community guidelines, parents are forced to cover-up their kids. This mom agrees with me and wrote in the caption: "For the record, there is no difference between boys and girls nipples and girls should also be able to ROAM THE FOREST TOPLESS as well!"

Do not persecute the innocent!

The sad thing about this rule is that innocence is being stripped away and the worst parts of humanity are being pushed into the mainstream.

Kids shouldn't have to be covering themselves up.

I mean, what have we come to when kids have to cover themselves up with cardboard? Heck, the only thing kids should be concerned with covering themselves with is strong SPF suncream.

Both Instagram and Facebook use artificial intelligence and machine learning to flag and subsequently delete images of child nudity and anything deemed to be showing exploitation. Is it the case that we just need to wait for the machines to get smarter?

But the people are getting smarter too...

As Instagram's fight against nudity rages on, it seems that those wanting to share explicit photos are finding ways around the guidelines.

I don't think that we can hold up much hope for Instagram slacking its tight community guidelines anytime soon. I'll tell you what Instagram doesn't mind posting, though... vile trophy hunting, animal murdering monsters. Keep scrolling to read all about how Instagram allows pictures of trophy hunters and their kills on their site...