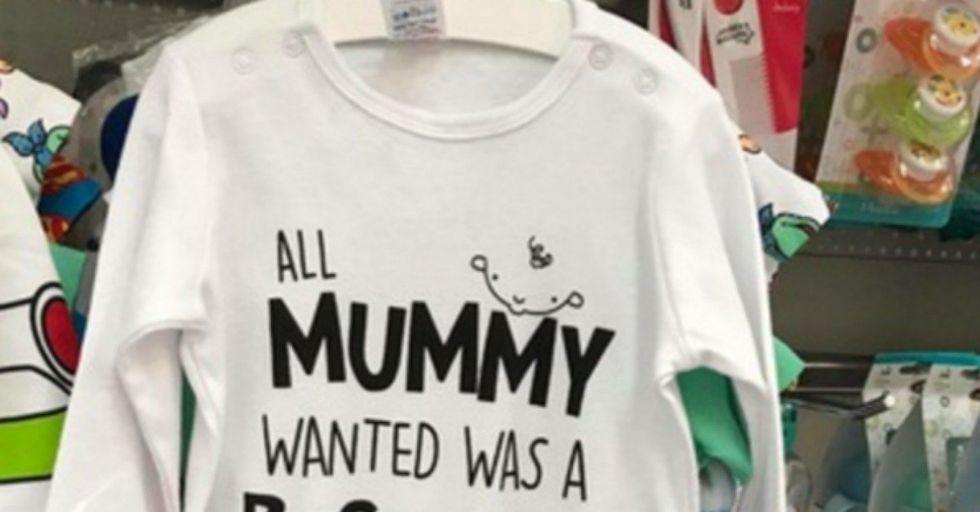 Moms Are Furious Over This Inappropriate Baby Onesie

There's a fine line between funny and inappropriate, and that line gets even finer when you're talking about anything for a baby. What one person finds cute and edgy, another person might find offensive and distasteful.

As cute as babies can be, many parents get just as excited about the prospect of dressing them up.

Baby clothes ARE cute, and having a little one affords parents the opportunity to dress someone else up in something that might be cute or silly or funny.

I mean, the baby COULD object, but the parent probably wouldn't be dissuaded.

As a result, the clothes often match a parents sensibilities.

And that's the one that can get parents in trouble. When people try to be funny is when they generally create the biggest fuss.

The creator's of one onesie took this approach, offering a simple joke for a laugh.

But the joke didn't go over well for a lot of people. See the offending item for yourself and see what you think.

Exhibit A: This onesie

Mumsnet user JarHead123 shared a photo of this onesie, which as you can see, says, "All Mummy Wanted Was a Back Rub." Now I don't have kids, but I do have an opinion, and I didn't really think much of it other than maybe dad got a little handsy and it lead to sexy time.

It's actually a pretty common item, but that hasn't done anything to cool people's tempers on the message.

The reactions are far more severe than you would think you'd get from a little onesie.

Others thought the same, because other forum users noted how inappropriate it was for the message to imply the baby would grow up knowing it was an "accident".

"At least the baby is too young to read this <clutching at straws> Sadly people's taste don't seem to improve much when the kids grow-up," added another.

Or that the child was conceived through rape.

"I'm the by-product of rape..This is exactly my reaction to the op," commented another. Similar versions of this onesie can be found all over the place, so clearly people are buying them, but not the people on this forum. Would I buy it for someone? Nope, but I'm not sure I would go as far as these commenters did. What do you think?

Others took a more measured approach.

Saying the did think it was funny, but it's also a little...tacky. You'll see people took a stronger stance against the little piece of clothing. If that bugs them, they'll definitely want to avoid these other pieces.

Others opted for the more dramatic responses.

To each their own, I guess.

If THAT slogan was found offensive, what about this?

Is it promoting baby alcoholism?

Is this sending the same message? Possibly even more directly?

There's no accounting for people's sense of humor, it seems.

Maybe it's the fact that a baby's wearing the clothes, but people are just not fond of jokes on kids.

Well, except the people who dress them up. They're clearly in on the joke.

Then there are the pieces that CLEARLY draw the line.

Why would you dress your kid in this? It's vulgar. I guess we all have our limits about what works for a joke. Did any of these cross the line for you?