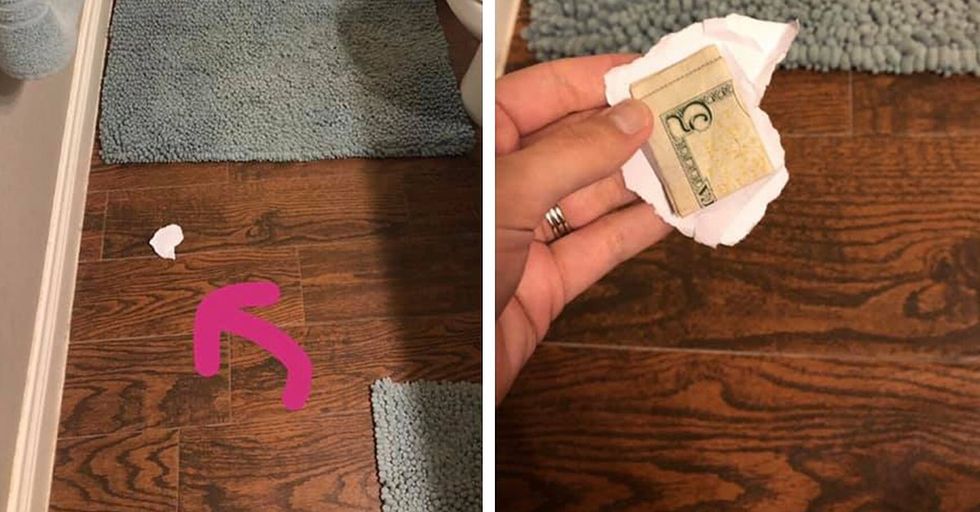 In a family, keeping things clean should be a family effort, right? That's what Miranda Crimbring thought when she noticed that her kids really weren't doing their part. So she decided to try out a little experiment on the kids (and her husband too, for good measure!)

We're sure plenty of people can relate to this problem. Not everyone is a pro at being tidy! So if you're here looking for a way to get your kids or partner to pitch in...well, Miranda's method may or may not work. Honestly, its effectiveness is still unclear. However, you'll still be laughing when you see what Miranda planned, and how her family reacted to it! Never underestimate a couple of kids who really don't feel like cleaning.

But many people like having a clean living space, so chores are just one of those necessary evils in life.

And the only times it should be is when you live alone. But if you've got a spouse, a family, then generally it's expected that all of you will make an effort in the cleaning department.

Inevitably, there will be slacking off.

Look, cleaning isn't fun. Kids are fairly fun-oriented. So teaching them to clean up after themselves can be...a process.

And it doesn't help if your partner also doesn't clean.

At least when there's two of you setting a good example (and teaching lessons), it'll sink in faster. But if it's just one of you, the battle can feel a little uphill.

So how do you get the kids more involved?

Well, there are plenty of theories and parent-tested methods out there.

Miranda Crimbring is a mother of three who noticed that she was the only one cleaning up messes at home. And one night, she reached the final straw.

Despite her attempts to get the kids to clean, they left this big mess...

"I went into the bathroom one night and saw clothes scattered across the floor, trash (NOT in the trashcan, of course) and the rugs all ruffled and sad looking," Miranda told CafeMom. "I feel like I am constantly telling the kids to pick up after themselves, usually getting a, 'But it isn’t mine' type of response."

So Miranda hatched a plan.

It's even got its own special name! After finding that mess, Miranda put into action the "Who Will Pick Up the Random Piece of Trash That They KNOW Isn’t Supposed to Be There" Challenge.

As you can guess, it's a pretty simple challenge.

Miranda placed a piece of trash (a ripped chunk of paper, in this case) on the floor of their bathroom and waited to see who, if anyone, would pick it up first.

And she added this twist:

The point of this challenge was that it should be obvious the trash didn't belong there on the bathroom floor. So Miranda taped $5 underneath it, as a reward for whoever picked it up.

Miranda thought her plan was both straightforward and fun.

"I truly thought I made it obvious by putting the paper in the middle of the bathroom floor," she said. "I knew this was a high-traffic area so I figured one of them would stumble upon it in the morning."

And, I mean, she wasn't wrong.

The paper was right there, so everyone definitely saw it. However, days later, nobody had picked up that trash from the bathroom floor.

"An entire day went by and...nothing! I figured it must be a fluke," she said, "so I waiting patiently the following day thinking one of them would notice it.  Still no."

Well, while trying to prove a point to my kids, we’ve just surpassed the 48hr mark of the “who will pick up the random piece of trash that they KNOW isn’t supposed to be there" challenge... Between the kids AND the husband, and MULTIPLE trips in and out of the bathroom, this little piece of heaven may just be in it for the long haul! -Miranda Crimbring

Her story immediately took off, as moms across the internet found it hilarious!

She described the ridiculousness of Day three's paper situation. "Even though they have kicked it around and even though it gets all damp and gross after showers, it still seems to be hanging around!"

She finally let her husband in on the plan.

"I kind of just shook my head when I realized my husband deliberately didn’t pick it up -- it wasn’t exactly surprising," she said. "But because of the particular situation, it was funny more than anything."

Still, it's frustrating being the only one picking stuff up.

"However, it can certainly be frustrating finding things on the floor that don’t belong, socks that conveniently miss the hamper, and trash sitting on the counter juuuuust above where the trash can is," Miranda continued. "I think many of us moms can attest to that."

When she told him, her husband tried (and failed) to play it cool.

"His first response was, 'Man, I KNEW I should have picked it up!'," Miranda said. "Typical. A few minutes later he came back up to me and said something like, 'But you know, honey, I left it there on purpose because I knew you were trying to prove a point to the kids...' HA!"

Nice try, sir, but no dice!

"He promised not to let the kids in on it, and he started to keep an eye on the situation with me, which only grew more hysterical for us each and every time one of the kiddos came out of the bathroom," Miranda added. "The paper is still in there and the kids still haven’t noticed."

As of Day 4, no progress had been made.

But despite the challenge showing no signs of ending, moms are relating so much to Miranda's post that it has taken off in the meantime!

And Miranda knows it.

"I am absolutely shocked by the attention this is getting," she said. "I think my husband said it best after it went viral, 'But it’s just a piece of paper with money taped to it.' Ha!"

In this case, simple is what does the trick.

"I think that’s what’s so great about it," she continued. "It IS such a simple thing, but something moms everywhere experiences and can wholeheartedly relate to."

And by Day 4, Miranda and her husband were letting the experiment continue.

"My husband and I haven’t really decided how long we’ll let it go," she says. "Honestly, I think we both thought one of the kids would pick it up by now."

Not too long after, she finally got her answer.

That's right, the paper has finally been picked up. Unfortunately...it was picked up by accident.

Crimbring's daughter made the discovery.

BREAKING: The paper has been PICKED UP!! My daughter threw her dirty clothes on top of it before getting in the tub.. when she went to grab them afterward, it flipped money side up and kind of slid across the floor. She gasped and then shrieked in surprise saying “Oh my gosh, this was under there... five dollars!" ??‍♀️ -Miranda Crimbring

That's not even the funniest part!

The real kicker to the story... After removing the bill from the paper, she left the paper sitting on the counter. -Miranda Crimbring

And Miranda's teenage child didn't have the best excuse for leaving it so long.

Also, the response from the teenager when asked why he didn’t pick it up before: “I didn’t see it... wait..." -Miranda Crimbring

So, have her kids learned their lesson?

Needless to say, we had a nice long family talk afterward. I suppose only time will tell if things play out any differently in the future. -Miranda Crimbring

Well, look on the bright side.

Maybe they'll at least start checking under garbage before they walk away and leave it on the floor?

After all, a little extra incentive never hurts! What do you think of this funny little challenge? Share this story with other friends who might relate to it!