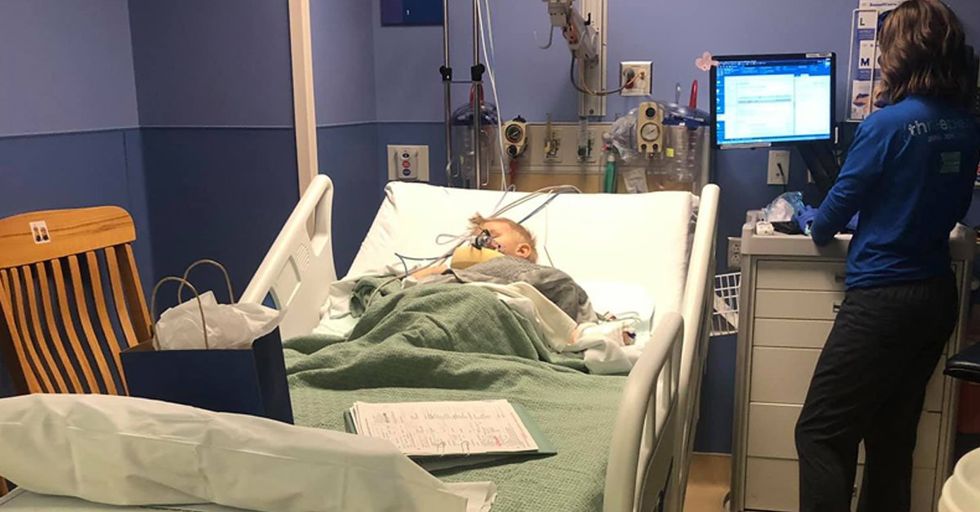 Popcorn is a go-to snack many moms to give to their kids, because it does have fiber in it, and it just goes hand-in-hand when having a family movie night. Plus, it tastes pretty darn good. And I've never witnessed a child say no to popcorn.

But, while this tasty, somewhat healthy snack seems a win-win, not all children should eat it. In fact, doctors recommend that children under the age of five do not eat popcorn at all.

A mom is sharing her story in hopes to spread the word so other young children aren't harmed by eating this delicious snack. Nicole and Jake Goddard from Parker, Colorado sat down for a normal family movie night with their three children, serving popcorn while watching Mrs. Doubtfire.

As they were watching the movie, their youngest child began to choke. And just before his father was going to do the Heimlich on him, their son, Nash, started to breath normal, and the parents assumed he had swallowed the kernel that was stuck. But they were wrong.

There are so many dangers that your child can encounter throughout their life.  Especially when they're younger.

That's why when this woman's son started gagging, her and her husband took immediate action.

But, ultimately, their 2-year-old son started breathing normal and they assumed all was fine.

The mom states that everything seemed normal and he finished watching the movie...

The family had been battling a cold, and Nash did develop a cough after the movie had ended, but the mom figured he was coming down with something.

But now, this mom is warning others on Facebook to take precaution when giving young children popcorn.

On her Facebook page, she reiterated her statement, "He seemed completely fine and continued to watch the movie. The only thing we observed was a cough he developed after the episode," she wrote.

And by sharing her story, hopefully, she helps others that are unaware of the dangers in serving popcorn to young children. Her son seemed fine, but he wasn't.

Nash had gone to bed as normal, but the following day he had a fever.

"Monday came and [in the evening] I noticed Nash felt warm and he was super fussy. He had a fever so I gave him Motrin and put him to bed."

The mom says that she slept next to him that night and noticed his breathing became "labored."

She called her pediatrician and he told her to take him to the hospital, "ASAP."

While at the hospital, Nash underwent a chest x-ray and bronchoscopy.

Nash developed an infection due to his body recognizing the popcorn as a foreign substance.

And the infection led to pneumonia in his lungs.

He underwent two procedures to ensure all the pieces of popcorn were removed.

The doctors were concerned since his lungs were so swollen.

Of course, the Goddard's were worried, knowing that their little son had to be put under for both procedures. But in the end, all was OK.

"We're so thankful our little man came out ok. All of this over popcorn, which is eaten on a regular basis in our home."

Many people responded to Nicole's post, showing both support and tragedies as well.

"My little brother passed away from a similar incident but didn't have any symptoms until it was too late. It took an autopsy to find the cause," Betty Cornutt Slaton said.

Popcorn isn't the only food children under the age of five should avoid.

According to the experts, parents should exercise caution when serving certain foods to children who are age five or younger.

Hot dogs are a popular food item for young kids, mainly because it's a protein most will eat.

And it is recommended that if you do serve hot dogs to your young child that you cut it lengthwise and then into halves or quarters.

Nuts and seeds can easily be inhaled since they are so small.

Which is why you may want to just avoid giving these to your kids until they are older.

Anything hard or too big for your child's mouth can easily get stuck in the airway, which is why you have to use your best judgment when presenting foods.

Grapes are definitely a food item that needs to be cut in half prior to serving.

If you go to grandma's house and she has a candy dish, do not let your young kiddo reach for it. Hard candies and gum are a big no-no for young kids.

Peanut butter can also be hard to swallow.

So, it's best to always serve thinly on crackers, and dependent on your kids' ages, you may want to ensure they have a beverage nearby to wash the gooey down.

Raw fruits and veggies can also pose a risk.

Apples and carrots are yummy; however, they can be a choking hazard if not cut properly.

Surprisingly, marshmallows can also be dangerous.

You might not think so because they are so soft, but kids can swallow them whole and get them lodged in their throats.

It's also important to ensure your child doesn't walk or run with food in their mouth.

Any time you offer food to your kids, you should always insist they sit down. Running or jumping around is a really bad idea as they can easily choke. And we know how active kids are, it's often hard for them to sit still for too long.

If you have older siblings in the house, it's important that they don't give their younger sibling foods off their plate.

Nash has two older sisters, and Nicole Goddard even admits that she has been more lax with child #3, which we are all prone to do, but this story reminds us that toddlers cannot eat everything older kids eat.

And it's very common for toddlers to want to eat whatever we are eating.

Which is why it is imperative we cut up the food for them, or if it is something with seeds – like watermelon – remove all seeds prior to serving.

When you have multiple children of varying ages, this can be cumbersome.

But, it could also be a matter of life and death which is why it is important to be diligent about what you serve to your young tots.

We also know that children have a habit of putting nonfood items into their mouths.

Always ensure there are no small objects left out in your home and that loose change is tucked away in a jar or out of your child's reach.

Parents may even consider getting a CPR certification.

Check with your local city or fire department to see if they have CPR classes in your area.

Being a parent means you do have to be extra vigilant.

And often we are overtired of the everyday hustle, which is why parenting is so hard.

Some foods come with warning labels.

Most brands of hot dogs carry a warning about serving to children under five.

But most natural foods items carry no warning.

Nuts and fruits usually do not have a warning label. Always use your best judgment when serving to small kids.

The mom in this story posted this incident on Facebook in hopes to help others.

And we are so happy that her son is OK. And hopefully, by spreading this message, more lives will be saved.