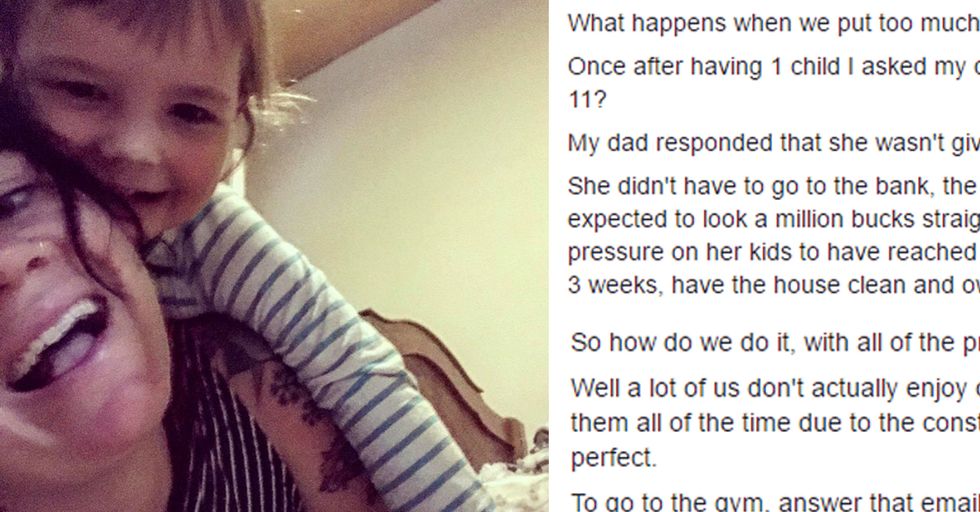 I'll never forget how my friend's grandma once summed up why modern moms and dads seem to have it so tough. She said, "You people today are so busy parenting. We never parented, we just raised our kids."

It seems like a small distinction, but it's an important one. Being a parent in earlier generations is seen by many (including my friend's grandma) as pure simplicity; it was all about getting a tiny human from infancy to adulthood without letting them run into traffic or become the next Al Capone. But was it really all that simple?

These days, raising kids has morphed into "Parenting" with a capital P, and say what you want about parenting of the past, things today are definitely more complicated. That's what inspired Constance Hall, Australian mom and blogger, to write a Facebook post that has since gone viral and started a fascinating conversation, for reasons you're about to see.

“What happens when we put too much pressure on mothers?" she asked.

Many parents were quick to agree with Hall, urging other moms and dads to ignore society's pressures and enjoy their children while they're young.

Others agreed that times were different in earlier generations, but not in the way Hall implies. In her post, Hall says mothers of yesteryear just "hung out with her kids and enjoyed them."

But that's not how everyone remembers yesteryear playing out.

So, are we less attentive to our kids now because of the new pressures put on parents to cook, clean, enroll their kids in a thousand enriching activities, and post it all to Facebook? Or are kids just programmed to need more attention than they used to?

This child development expert indicates that the problem isn't so much that the pressures of modern life make us less involved parents — it's actually the pressure to be so involved all the time that's the real issue.

Maybe that's why so many parents can relate to this mom, who just can't win no matter

In seriousness though, an interesting discussion emerged when some parents pointed out that, while they agreed with Hall's post for the most part, there were some important factors she might not have taken into consideration.

Throughout the Facebook thread, people presented all sorts of different viewpoints on whether modern parents or older generations had it easier.

True, I never regret the time I spend playing with my kids. Of course I still remember wistfully that one time when my living room floor wasn't covered with toys, and I'm not crazy about all the crumbs that stick to the bottom of my feet when I walk through the kitchen, so cleaning has its place, too.

But either way, finding a little help, kindness, and understanding in other parents sure doesn't hurt — no matter what generation they're from.

One thing in all of this is certain; no matter where you're from, whether you're old school or new age, a mom, a dad, or a little old lady at the grocery store, we're all just doing the best we can in this messy reality of raising our kids. So if you want to lean in and focus on your kids, or you let them free-range while you take care of the other ten thousand things on your to-do list, you're doing it right as long as you and your kids are happy. Bonus points if you can extend a little grace to the parents around you who just happen to do things a little differently.