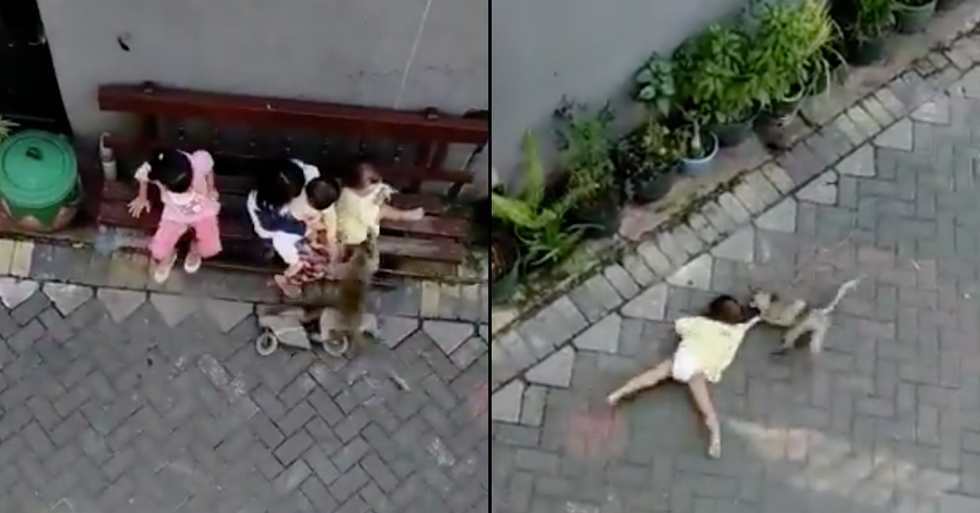 Shocking footage has emerged of the moment a monkey rides on a mini motorbike and tries to kidnap a toddler.

Yep, you read that correctly. And, after watching the clip, some people think there is a more sinister reason for the attack. Keep scrolling to watch for yourself...

Monkeys are often used for entertainment.

Whether it's street entertainment or a circus, these primates are often used, abused, and made a spectacle of just for a few laughs.

This week, shocking footage has emerged of a monkey trying to kidnap a child.

The terrifying clip, originally uploaded to Twitter, has since gone viral. Keep scrolling to watch...

In the clip, the monkey can be seen driving down an alleyway on a mini motorcycle...

The animal then approaches a woman and 3 children who were sitting nearby.

The monkey abandons its bike and grabs the little girl's dress.

Witnesses can then be heard screaming as they see the monkey drag her down the street.

Terrified onlookers helplessly watched as the animal dragged the little girl across the floor.

Thankfully, a man manages to rescue the young girl..

And managed to scare the monkey off, while the toddler ran back to her mom crying.

It looks to have been an utterly terrifying ordeal.

As a result, the girl is reported to have suffered abrasions to her forehead.

The footage is believed to have been filmed in Tanjungsari Village, Indonesia.

And has since racked up over twenty-four million views. Keep scrolling to watch for yourself.

Although, after the attack...

Many locals slammed the handler for beating the monkey after the incident, saying it’s wrong for the animals to be used for entertainment in the first place.

After watching the clip, people are totally baffled.

We have many questions...

Some saw the funny side...

"That monkey didn't check his mirrors before stopping like that."

Others raised this point.

The mom certainly didn't seem a huge rush, we'll admit. "I’m confused why nobody got up right away and ran after that baby they just pointed at da monkey," wrote another user.

However, while it may seem funny at first, some people think there is a more sinister reason for the attack.

When the clip was shared on Reddit, one person wrote that they noticed a cord around the monkey's neck, and explained that they think it was being trained - especially since the incident was being filmed.

Here's what they had to say:

"OK so what really happens is those monkeys get put on a toy bike (that doesn't have an engine) and a collar with a rope on it. "The owner then yanks the cord so the monkey flies from one end of the street to the other while steering."

"Pretty cruel and that's probably why the monkey is so strung out. You can see the owner trying to pull back on the cord and he pulls the monkey while it hangs on to the kid, and in the start yanking the cord to propel the bike."

And after re-watching the clip...

@peteerh Oh my god that is bloody scary. They have trained that monkey to kidnap small children & then they pull th… https://t.co/Pjx4SetrEP
— CharliChops (@CharliChops)1588595931.0

Many are now noticing the cord in question. "Wow, I just rewatched it, and, yes, I absolutely saw the cord. Gross! So that sort of explains why the other guy was filming... he was the 'training' session. That's so sad," wrote another user.

Another person settled on this explanation.

"The monkey isn't trying to pull the kid with it, it's just trying to grab onto something so it doesn't get pulled away."

A definitive conclusion hasn't been reached about the video yet...

And it still remains unclear how the incident occurred, although some people online are calling for it to be officially investigated.

Want more stories like this? A German animal testing lab where monkeys were filmed screaming in pain was recently raided... keep scrolling for the full story.