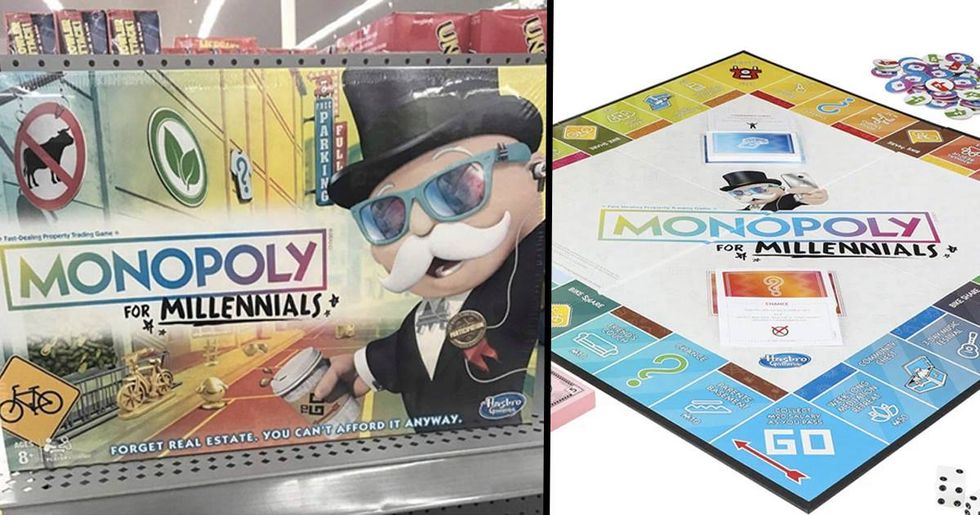 Monopoly – you either love it or you hate it. We’ve all played it and whether we like to admit it or not, we’ve all wasted hours of our lives arguing our way through our own made-up rules with a crooked Banker on hand. Despite this, it remains as one of the most popular games of all time. This popularity has encouraged Hasbro to release many versions, editions and variations of the game. And new for 2018, I kid you not, is Monopoly for Millennials.

Monopoly for Millennials throws out the original concept of buying property, paying rent and saving money. Instead, the product specs state:

Money doesn’t always buy a great time, but experiences, whether they’re good – or weird – last forever. The Monopoly for Millennials game celebrates just that. Instead of collecting as much cash as possible, players are challenged to rack up the most Experiences to win.

Yes. You read that right. You get to blow all your money on ‘experiences’ whilst visiting ‘your friend’s couch’ or the ‘vegan bistro’. Feeling patronized yet? Wait until you see the box.

Recognise the ‘Participation’ ribbon? Insulting much?

Yes. It is hard. I have no money. I can’t afford real estate and everything is my fault.

I feel as though I can relate to this.

I’ll just be over here, eating my avocado on toast and meal-prepping my marinated tofu, grain-free salad bowl.

Does it deserve to be given the title of worst game ever invented? I'm not quite sure. When it comes to that title, there may be a few other contenders in the mix to look at.

I thought that money wouldn't change me either but Monopoly does certainly seem to bring the worst out in people.

Did anyone else throw their dice across the room in frustration each time a counter landed on yet another chute? How can any game where you can go from 94 all the way down to 10 in one throw of the dice ever be considered to be enjoyable?

You spend all that time putting counters in, trying desperately to connect 4 in a row, only for it to all come crashing down. $15 spent on a game that you could have played using a pen and some paper.

I don't know about you but I think I prefer this version.

Any game where someone can win hours before the end yet make you sit patiently and lose through the rest of the game is definitely not fun.

It teaches kids how to lose. Need I say more?

Rolling a dice and moving spaces makes this game last far longer than it should. And it's a pointless addition.

Children can be quite impressionable. I'm not sure it's a good idea to allow them to think we have rubber bands in our legs and a pencil in your wrist.

I tend to agree.

No wants to play Jumanji.

Surely Jumanji is a top contender? Another roll and move game that's only saved by nostalgic childhood memories of Robin Williams.

Or are we looking at this in the wrong way?

Is it the board games that are so terrible, or is it that they bring out our competitive nature, cause family quarrels and expose cheaters?

Even classic family-friendly games seem to bring out a competitive nature.

And I'm not sure I'd want to be in the middle of arguing in-laws.

20 minutes to set up. Over in 7 seconds. The reward from Mouse Trap is just not worth the effort put in to play. It always left me feeling disappointed.

If anyone claims that any intelligence is needed to play this game - they're wrong. A game of relentless repetition which involves shouting out random numbers, hoping to get a hit.

Where the player who goes first will either definitely win or draw. It's a fully solved game where the only guarantee of winning, is if you play it with yourself.

If you have an old version of this game lying around your house, you'll know why Trivial Pursuit makes it on the list of 'worst board games ever'. The questions are based on current knowledge so every answer will begin with, "At the time this game was made...". Good luck answering any questions from the 70's!

The Game of Life.

If you played this as a child, you probably didn't understand the significance of curing cancer but still losing to the salesman who won a lifetime achievement award. You basically make 4 decisions in this whole game - do you go to college, what profession do you have, do you want to swap salaries with another player and do you have the most money? A game that teaches children to steal and that money trumps everything - it deserves it's place on this list.

If you thought teaching children that money was the most important life goal, imagine teaching women that their career options were limited.

via: Board Game Geek/Selchow & Righter Co.

'What Shall I be - The Exciting Game Of Career Girls' brought out in 1966 allows you to chose to become a teacher, airline hostess, actress, nurse, model, or ballet dancer. That's it. Talk about limited options.

This game is just plain confusing. Why is Daddy sleeping next to the refrigerator? One trick pony. Much like Mousetrap. One spring-loaded mechanism with the added confusion of why Daddy is sleeping in the kitchen.

Millennial Monopoly is yet another variation on the old family classic Monopoly. We all have some version of this game hanging around our house. The game that seems to never end. It causes heated family arguments and hours of torture...

We've all witnessed at least one family member throw a board game across the room.

Or tipped the table. And it's usually Monopoly that does it.

I am well aware that this is a popular family game. However, my idea of family fun does not include needing a shower afterwards. An overly simple game where I will inevitably be splatted with whipped cream does not appeal to me at all.

Board Games. A Family Tradition.

A tradition that I hope never ends. Despite the anger, angst and frustration that they cause.

Unless you make me play Twister.

There are far too many bodies in close proximity for me when it comes to this game. Although it isn't technically a board game, I feel that it deserves a place on this list. Twister is not fun. Please refrain from taking it to any party you go to - especially if I will be there.