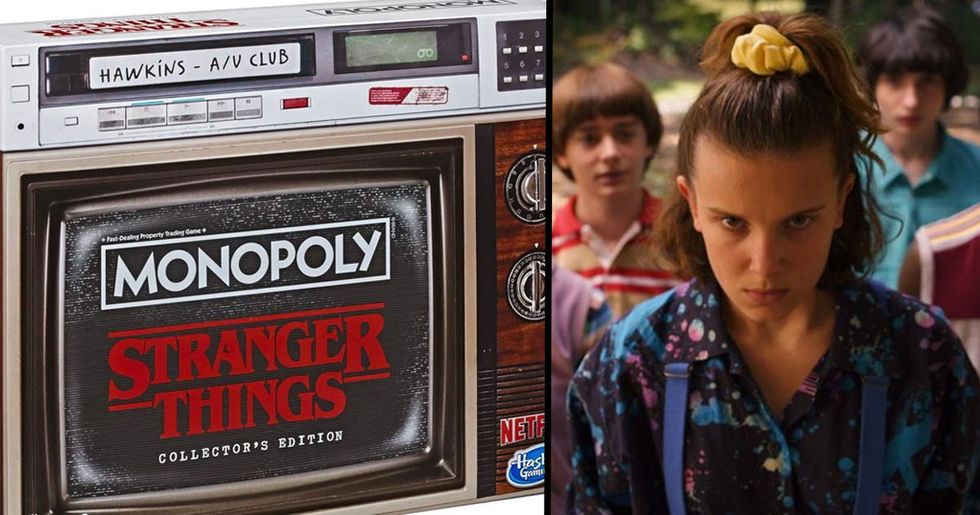 The world has gone a little Stranger Things mad, hasn't it?

Following the hugely successful release of its third season, the sci-fi horror franchise is now more popular than ever, with fans going completely bonkers for the spooky TV show.

So, fans will be delighted to hear that Monopoly is joining in on the fun by releasing a limited edition version of their infamous game. Yep, you can now immerse yourself in hours of competitive, slightly angry, family fun, all while playing in the Upside Down.

Keep scrolling for more details, and to find out where you can buy this magnificent invention. You can thank me later.

No matter where you look or where you turn, there will be some form of Stranger Things reminder lurking in the shadows.

From fun fairs to toys...

Stranger Things has expanded way beyond our TV screens. The TV show, which follows the journey of a group of kids saving the world from monsters from another dimension, has taken the world by storm and has produced a vast range of merchandise.

And now, Monopoly has gotten involved.

Because they always do. The king of all board games, Monopoly, is always up to date with the current trends and fads.

The game has been causing family arguments for generations.

And we wouldn't have it any other way. It isn't a real family get-together if you don't end up throwing a Monopoly across the living room, is it?

And it's now going to cause some Stranger Things-themed arguments...

Because Monopoly has released an edition of the game dedicated entirely to the sci-fi TV show.

The game will feature a few changes...

Instead of the usual Monopoly player figurines, the game will come with pieces significant to the show such as cassette tapes, a walkie talkie, a skateboard, and a miniature Demogorgon, to name a few.

The game has been completely reimagined.

As well as featuring unique graphics from the show in the center of the board, the game will also play slightly differently to the normal version of Monopoly, with the house and hotel pieces having been swapped for forts and glow-in-the-dark hideouts.

And there will be the Upside Down cards...

... Which can potentially reverse your lead and, literally, turn your game upside down (that's when you throw it across the living room in rage).

It will be a collectible item.

Toy store giant, Hasbro, has released collector's items for other shows such as Pokemon and Star Wars in the past, so it was no real surprise when they announced that they would be the ones to release the Stranger Things version of the game.

And it's available to buy now!

What are you waiting for? The game is available to buy now through pre-order, and it's a complete steal at only $50. You can buy it here. Not into Stranger Things? Monopoly has also released a Lion King version of the game just in time for the release of the new live action movie and it even comes with its own Pride Rock! Read more about it below!