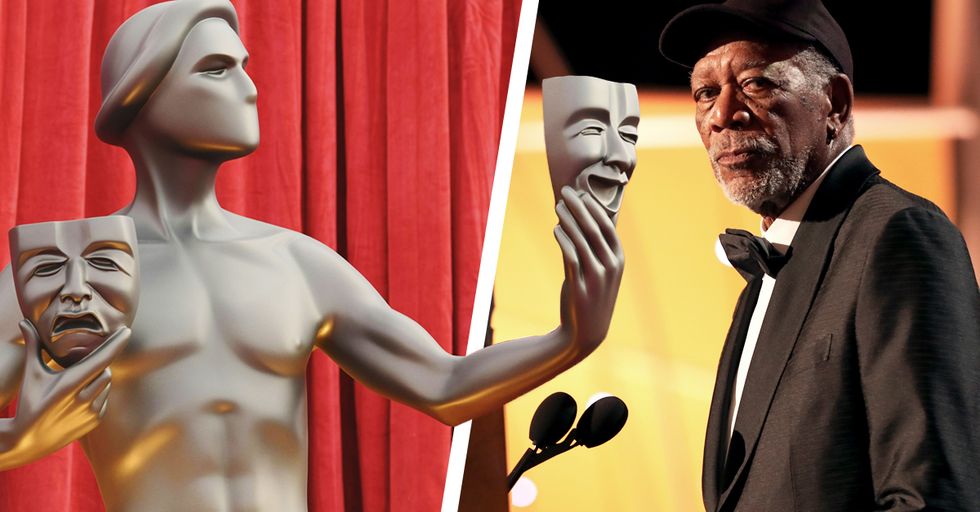 Well, folks, we've solidly entered award season. In some ways, we're still reeling from the fall-out of this year's Golden Globes, but Hollywood has moved on without us. The Screen Actor's Guild Awards were held over the weekend and there's not a whole new crop of drama to deal with.

Allison Brie was questioned about her brother-in-law James Franco, Aziz Ansari's name was met with literally zero applause when he was announced as an award nominee. Oh, and Morgan Freeman called out the award statuette. It was a big night.

The award is meant to honor people "for outstanding achievement in fostering the finest ideals of the acting profession," although its name kind of just make it sound like it's for someone who has achieved life. Either way, Freeman has clearly earned it.

There were two things of particular note about Freeman's speech. First of all, he at one point totally called someone out for talking, texting, or being otherwise distracted while he was speaking.

i think someone was talking or texting during morgan freeman's speech and then he called them out and now i'm dead https://t.co/W014rnEDAd
— David Mack (@David Mack)1516587389.0

Imagine being called out by Morgan Freeman. Just imagine what that must feel like. You know that that person — whoever it was — was wishing they could sink directly into the floor at that point.

And then Freeman called out the entire award show:

"I'm gonna tell you what's wrong with this statue. It works...from the back. From the front, it's gender-specific. Maybe I started something."

Now, in case you're not familiar with the SAG award statuette (called "The Actor"), here's a glimpse of its front.
Mm-hm. Yep. It's not difficult to see what Freeman was referring to in his speech. There's definitely a...um..bulge, there. Is the Screen Actor's Guild implying that all actors are men? And if so...isn't that a problem? Because this is the Internet we're talking about, everyone completely understood and agreed with Freeman's statement and had no issues with it at all...

And yeah, it is just a statue. (And there's never been anything wrong with any statues ever before, right?) People who make this argument are missing the bigger point, though.
Every day, women and men and children all over the world are subjected to thousands of images and videos and works of art — everything from the billboards you see on your morning commute to the pre-roll ads on a YouTube video to the commercials that air while you're watching TV — and the images we see, whether we like it or not, can directly influence how we view the world. If you don't see a woman depicted as an actor on the same level as men, you could easily fall prey to the assumption that women simply aren't actors. The statuette is literally called "The Actor," and it is a man. Surely there's room for more representation here, right?

And before you comment, yes, the Emmy statuette is a woman.

Maybe there should be a male version of the Emmy statuette! Or maybe all statuettes should just not have discernible sexes! They don't need to even look like humans. There are plenty of types of art, right? If anyone is bothered by what we're working with now, maybe it's not a totally bonkers idea to try to accommodate them.

Anyway, to all the people who think Freeman's statement is uncalled for, I have three words for you:

He's kind of God, so your point is pretty much invalid. Sorry 'bout it.

The rest of us are happy that Freeman may have "started something." Now, what else can we start?