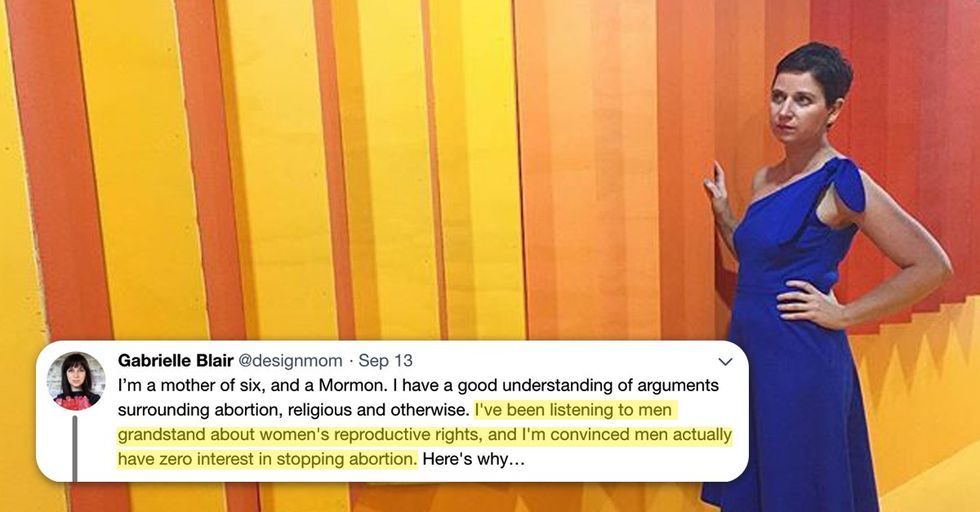 The internet, and in particular Twitter, can be an overwhelming place. Especially within the last few years, it feels like anytime you log on, you're faced with depressing news or an ignorant post from the uncle who none of your family speaks to anymore.

Abortion is something that has divided people for many, many years. When Donald Trump was elected as President of the United States (it never stops hurting to say that), conversations surrounding abortion grew even more heated. Not that they weren't before, but now anyone can log onto Twitter or Facebook and make their opinions KNOWN LOUDLY. As the Trump administration made clear their goal of defunding Planned Parenthood, the fight for a woman's freedom and the right to have access to health care and make a decision regarding her own body continues. It's exhausting.

But in a recent Twitter thread by Mormon mom of six and writer Gabrielle Blair, she offers an extremely interesting way of decreasing the number of abortions in America. She's also seriously not afraid to spit some truth.

Gabrielle Blair is a blogger, mother of 6, and a New York Times bestselling author.

I’m a mother of six, and a Mormon. I have a good understanding of arguments surrounding abortion, religious and oth… https://t.co/yvGrui3KJN
— Gabrielle Blair (@Gabrielle Blair)1536876945.0

Already, it's clear this woman is a total badass and ready to take down anyone who thinks that women are responsible for abortions. Can we get a resounding, "Hell yeah"?

Blair pointed out the fact that men are 100% responsible for unwanted pregnancies.

If you want to stop abortion, you need to prevent unwanted pregnancies. And men are 100% responsible for unwanted p… https://t.co/ztGZExHbsD
— Gabrielle Blair (@Gabrielle Blair)1536876946.0

If you're quiet enough, you can hear the tears of men falling all around us. But seriously, she makes an excellent point.

Blair then explained why this is the case.

Is a mic drop appropriate for this situation? We think so.

Of course, the next thought is, "Well, why don't women just stay on birth control?" Blair tackles this question next.

Modern birth control is possibly the greatest invention of the last century, and I am very grateful for it. It’s al… https://t.co/ye8WAHAOrZ
— Gabrielle Blair (@Gabrielle Blair)1536876947.0

There are a ton of side effects to birth control. Plus, if you don't have health insurance, access to birth control is a nightmare and a headache. Especially since there are people hellbent on destroying Planned Parenthood, which is an excellent resource for the uninsured.

Blair points out how contraception has always been focused on women, and not men.

Men can keep them stocked up just in case, so they’re always prepared. Amazing! They are so much easier than birth… https://t.co/d2w41pciAi
— Gabrielle Blair (@Gabrielle Blair)1536876948.0

The issue with condoms is that most men don't like them.

Why would men want to have sex without a condom? Good question. Apparently it’s because for the minutes they are pe… https://t.co/kxMU50M3ed
— Gabrielle Blair (@Gabrielle Blair)1536876949.0

Blair asks, "So why in the world are there ever unwanted pregnancies? Why don't men just use condoms every time they have sex? Seems so simple, right?" And then answers with, "So… there are men willing to risk getting a woman pregnant — which means literally risking her life, her health, her social status, her relationships, and her career so that they can experience a few minutes of slightly more pleasure? Is that for real? Yes. Yes, it is." Talk about depressing.

As Blair points out, all of this info is pretty disturbing.

It’s mind-boggling and disturbing when you realize that’s the choice men are making. And honestly, I’m not as mad a… https://t.co/T0amaNx8FZ
— Gabrielle Blair (@Gabrielle Blair)1536876951.0

Blair then further backs up the claim that men are the cause of all unwanted pregnancy with the fact that a man can't impregnate a woman without having an orgasm. This brings up an interesting point about biology and pleasure and our bodies.

And you know that Blair is going to break it down for everyone on Twitter.

No matter how many orgasms she has, they won’t make her pregnant. Pregnancies can only happen when men have an orga… https://t.co/KZ9ZoV6iT2
— Gabrielle Blair (@Gabrielle Blair)1536877057.0

This leads Blair into the topic of responsibility.

The big thing here is the fact that there aren't consequences for men when it comes to unwanted pregnancy. A man has the opportunity to simply walk away.

It's not the same for the woman.

If the woman decides to have the baby, or put the baby up for adoption, the man may never know he caused an unwante… https://t.co/6sXRtSE7jq
— Gabrielle Blair (@Gabrielle Blair)1536877119.0

An unwanted pregnancy could not be more different for the man and woman involved.

So, even though a man can irresponsibly get a woman pregnant, the burden falls on her.

Every single time. It's really depressing.

Blair insists we need to be holding men responsible for unwanted pregnancies.

When the topic of abortion comes up, men might think: Abortion is horrible; women should not have abortions. And ne… https://t.co/8zo2gRyQ0H
— Gabrielle Blair (@Gabrielle Blair)1536877155.0

It comes down to the fact that we must hold men responsible for their actions. This is not an easy thing to do. Nobody wants to hold men to their actions.

But there are some things people can do to hold men responsible.

Can you even imagine, for a moment, living in a world where there weren't protestors at clinics? Where men didn't get to decide what happened to a woman's body?

Blair begins to ask some serious questions that people don't like thinking about.

Here's where her radical solution comes in. And trust me, not everyone is going to like this.

Everything Blair says is true.

The effects of an unwanted pregnancy on a woman can sometimes be fatal. So how do we fix this?

Blair has a plan.

For those of you who consider abortion to be murder, wouldn’t you be on board with having a handful of men castrate… https://t.co/Gvyoy6hXlz
— Gabrielle Blair (@Gabrielle Blair)1536877386.0

She's thought everything through. She even has a plan for the sperm of the men who would be castrated.

All bases are covered!

Hey, you can even have the men who will be castrated bank their sperm before it happens — just in case they want to… https://t.co/KzYMpRrEW4
— Gabrielle Blair (@Gabrielle Blair)1536877387.0

Of course, many people aren't able to wrap their head around the idea of a physical punishment for men. So Blair offers something else.

Uh, yeah, a vasectomy is a lot less invasive than many birth control methods.

Vasectomies are very safe, totally reversible, and about as invasive as an doctor's exam for a woman getting a birt… https://t.co/o6xaF0Sp63
— Gabrielle Blair (@Gabrielle Blair)1536877643.0

Plus, it's reversible. There's nothing permanent about it.

Blair explains that she knows there will be people who will object to these ideas, but her point remains: stop focusing on women when it comes to trying to get rid of abortions.

She draws on a comparison to cure and disease.

If you want to stop abortions, you need to prevent the “disease" - meaning, unwanted pregnancies. And the only way… https://t.co/fEtZ8FW87w
— Gabrielle Blair (@Gabrielle Blair)1536877644.0

She insists that the only way to decrease abortions in America is to focus on the cause of unwanted pregnancy - men. She implores men to think about this seriously.

What would it take for a man to not irresponsibly impregnate someone?

Ask yourselves: What would it take for you to value the life of your sexual partner more than your own temporary pleasure or convenience?
— Gabrielle Blair (@Gabrielle Blair)1536877927.0

It's a serious question and one she's serious about asking. Women are constantly being controlled by men, even when it comes to their sexual health.

As Blair points out, we live in a country which is mostly run by men.

This is not new information, but when will things change? The idea that abortion rates could change without the mention of a woman is mind-boggling because it's something that feels so impossible.

There were a lot of people who agreed with Blair and applauded her thread.

People praised Blair for her ability to blow up things that we think we know.

Through a Twitter thread, she was able to get people thinking about a topic that many already feel strongly about. We totally understand this woman's reaction.

Every day we are told how we're supposed to think.

Some Twitter users thanked Blair for writing the thread and shared their own stories.

Despite how negative Twitter can feel sometimes, it really is amazing when people come together and share what they've gone through in life.

Sometimes you just agree with someone so much that you basically turn into a living "clap hands" emoji.

Will this be the first Twitter thread to win a prestigious award?

We wish it were possible. But for real, that is a thing that sounds like it could happen in like, 20 years.

There aren't enough clapping emojis for this Twitter thread.

Of course, there's a ton of people who disagree and will drag Blair for her opinion, but the outpouring of support is pretty amazing to see.

Blair should update her Twitter bio to "Slayer of Tweets."