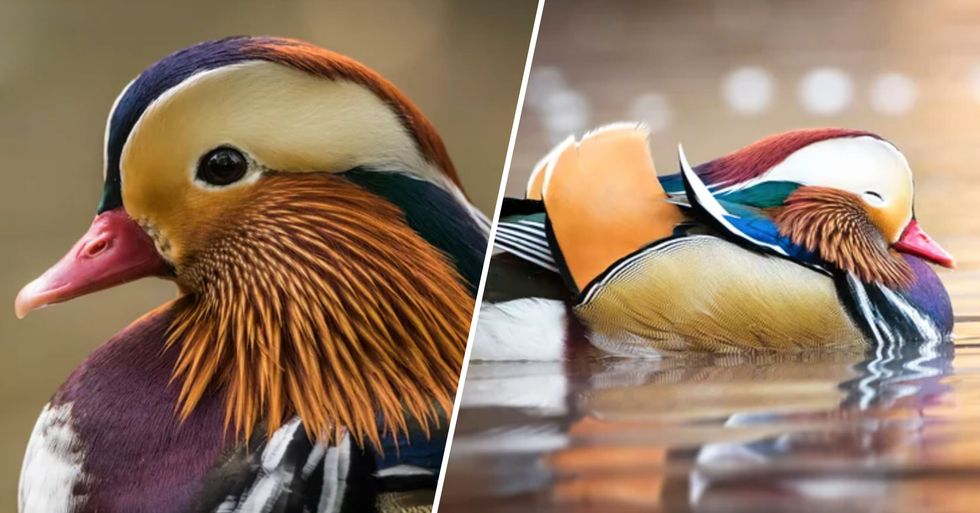 The Mandarin Duck, which is highly regarded as "the most beautiful duck in the world" has once again been spotted in Canada.

Keep scrolling to read more about this aesthetically pleasing duck, and to find out the remarkable circumstances behind its reappearance...

And our animals are thriving as a result. Keep scrolling to see some examples of flourishing wildlife from all over the world...

In a town in Wales, UK, a group of mountain goats came to visit.

It seems that our animals are really benefiting from this lockdown.

And, in even more exciting instances...

Some incredibly rare and exotic animals have been coming out of hiding.

It turns out that many of these supposedly "rare" and "endangered" animals were simply hiding away from us humans...

And now, they are reemerging in full force.

But the most exciting sighting has happened in Canada.

This weekend, a rather unique, and incredibly rare animal was spotted at a deserted Burnaby Lake in suburban Vancouver, British Columbia.

I introduce to you...

Considered as "the most beautiful duck in the world", sightings of the Mandarin are far and wide.

The colorful duck which boasts a gorgeous orange, purple, white, and blue plumage is native to China and Japan, so it is next-to-impossible to get a sight of one on this side of the pond.

But, low and behold, Canada has a Mandarin duck of their own.

Over the decades, these particular birds have somehow migrated to Europe, and the odd few have made it over to North America. And this duck, which has been affectionately named as “Trevor," made his spectacular first appearance in Burnaby Lake back in 2018, and he attracted hoards of tourists flocking to catch sight of him.

But, evidently, these tourists didn't bode too well for Trevor's nerves...

As he wasn't to be seen again.

Trevor was briefly spotted at the lake again in November 2019...

An excited photographer posted a video of the beautiful bird, and he was quick to gain tremendous viral attention.

But now that the number of tourists has subsided dramatically...

Trevor has been spotted once again... I mean, he isn't difficult to miss, is he?

Trevor's vibrant plumage stands out amongst the rest of the native birds...

So when he is out and about, he certainly draws a lot of attention.

And, luckily for us all, Trevor is back.

A small group of tourists visiting the lake reportedly spotted Trevor peacefully swimming around once more.

This duck is the lockdown anecdote none of us knew we needed.

Stay strong, Trevor! For more on animal antics during lockdown, keep scrolling to read about the tiny wooden restaurant one man built for his local squirrels...