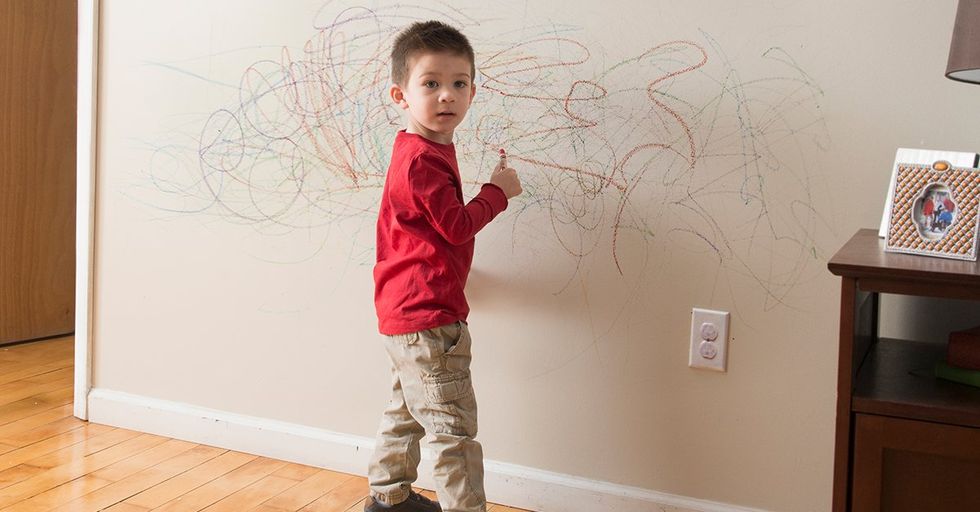 Top Ten List of the Names of Naughty Children

Moms-to-be take notice! If you are expecting, then you might already have a name picked out that you will call your baby upon his or her arrival. But, as we learned in school, it's always good to do your homework.

Thinking of what to name your baby should come with some thought. After all, this is the one thing they will carry with them their entire life. Some expectant parents decide to name their child after a family member; some name them after their favorite actor/actress or musician; some well, some give absolutely no thought to it at all. Whatever your rhythm, it's important to note that some names are notorious for causing trouble.

And if you already have children, then definitely read on to see if your kid's name made the list. According to The Sun, these are the names of the children with the worst behavior.

The study from School Stickers looked at the rewards given to children for their behavior in the classroom. And listed the top ten that tend to have the worst behavior.

If your daughter has these names then guard yourself. Or maybe reconsider naming if your baby isn't born yet.

Ella was rated #1 for the very worst behavior in girls. And yet, Ella from Ella Enchanted was such a good girl.

The name Bethany comes in second place for worst behaving.

This is not as popular of a name as Ella; however, most of us do know of one famous Bethany (spelled Bethenny). Last name Frankel.

Eleanor was rated #3 for worst behavior.

This is surprising, at least since the name has a sort of regalness ring to it. Also, Eleanor Roosevelt seemed anything but defiant. But, she was outspoken — in a positive way.

Little Olivia ranks in at #4.

I personally admire this name. It sounds sweet, pure, and another common spelling of it (nowadays) is Alivia.

#5 on the list has been around a long time and is common over generations.

Laura is #5 as worst ranking behaved girls. This is a name that seems to flow with time, it is ageless.

This next name is popular for girls born around Christmas.

Holly made the list at #6. This is popular for little girls born in the month of December for obvious reasons. But Holly, apparently, brings a bit of naughty with that nice Christmas cheer.

Oh, #7 is yet another popular name. And that name is Courtney.

We all know the famous Kardashian who spells it with a "K." But, let's not forget about Courtney Cox and Courtney Love. Maybe there is some truth behind this name being sassy after all?!

Amber is #8 on our list of bad behaved little girls.

The name Amber peaked in popularity in the 1980s. You don't hear this name as much of the others on the list.

Caitlin nears the end of the top ten list at #9.

This name seems to be growing in popularity, thanks to Caitlin Jenner. And this name is a variant of the the name Katherine, which means pure. Hmm...

So Jade can actually be a boy name too. This name hit the charts in the '70s after the singer, Mick Jagger named his daughter this.

Alright, so those are the names of the girls who are not so well-behaved in school.

Now, let's take a look at the top ten names for boys who made the all-time naughty list.

JOSEPH! This is shocking. Joseph is such a common name and actually has biblical ties. This name has been around for centuries and is super popular. This truly is a name that has and probably never will go out of style.

This is another name that can be a boy or girl name: Cameron. We all know the famous actress with this name. However, little boys with this name may spend a good chunk of their time in timeout.

#3 for bad boys is William.

Gasp! Who knew William (aka Bill) would make the list as defiant. I wonder if Prince William was a handful as a child?

Jake. If you have never seen Sixteen Candles, then you are missing out on some cinematic history. Jake Ryan was a bit of a badass but a bad boy? Nah.

#5 is Joshua. The short form is Josh.

This name doesn't sound devious and I have never known a bad Joshua. In fact, when I say this name, the one person that comes to mind is actor Joshua Jackson. And he seems like a good boy.

#5 is Jamie and this is a versatile name too.

I actually know more girls with the name Jamie than boys. But then again, this study was done in the UK. Maybe it is more popular there for boys?

The name Lewis means "glorious ruler" and a common variation is Louis. Maybe names do have some weight to them — Louis Vuitton has been a luxury brand for years. It was actually founded in 1854 and is one of the world's largest fashion houses. And yes, it's founder's name was Louis Vuitton.

Benjamin sounds like a wholesome little man, doesn't he? And we can't deny that Benjamin Franklin was a founding father of the United States. This name means "son on my right hand." And that doesn't sound naughty at all.

Ethan means strong, firm. And while young kids with strong personalities are hard to rear, they most often are the ones who make history.

And the last one on the boys list is: Luke.

Luke does have a bad boy tone to it. Or maybe I just watched too much 90210 back in the day. And if you like the sound of this name but don't want to take the risk, then consider Duke maybe?!

There you have it. The top then list of bad girls and boys.

Here are some of the names of the good girls: Amy Georgia Emma Charlotte Grace

But wait, there are five more that made the good list.

Now, let's take a look at the good boy list. The top five are:

And the last five of the nice boys are:

The reality is that it can be hard to choose a name. Sometimes you and your significant other will disagree on the name.

If that's the case, then maybe see if the name made the naughty list. You can make a point to note that you'd be better off choosing a "nice" kid name.

There are a number of websites that give you name ideas and name meanings.

Just Google it. And if you want to know what the popular list of names are, search that too. Often times, especially these days, parents want their kids to have unique names.

At the end of the day, you have to live with calling your kid by her moniker.

Also, make sure it's a name you feel comfortable yelling. Because you will do that often as a parent.