The Most Famous Movie Set in Each State | 22 Words 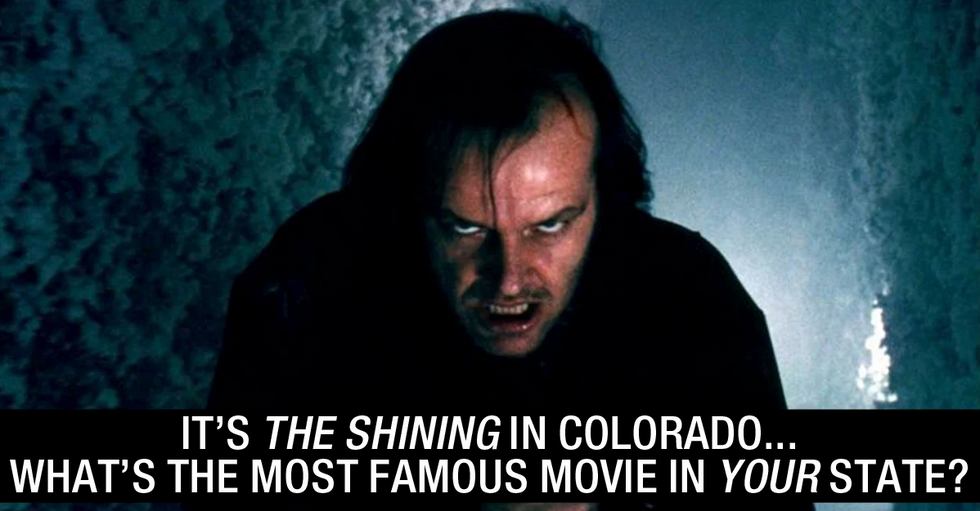 The Most Famous Movie Set in Each State

How often do you notice a movie's setting, especially if it's not some well-known city? Well, as it turns out, there's a famous movie to match every state in the US!

For those who don't have time to hit up every single state in the country on a road trip, what better way to experience all 50 states that through iconic cinema? Every state has that one movie that's impossible not to know about! Maybe you'll already be able to guess some...and maybe you'll be surprised by others! Most states have multiple iconic films, after all, but one has to come out on top.

So here's a rundown of the most famous movie set in each of the 5o states!

Who didn't see this one coming? Forrest Gump is arguably one of the most beloved and iconic films of all time, and we all know that Forrest hails from the southern state of Alabama. He's pretty much Alabama's pride and joy, even though he's really Tom Hanks with a buzz cut!

No, visitors to Alaska are not as likely to get mauled by wolves as The Grey would have you believe, but the 2011 Liam Neeson movie still offers a good look at the beauty (and deadliness) of the Alaskan wilderness.

Arizona's most famous film has the state right in its title. The Coen brothers created this memorable crime satire set in the Arizona desert, wherein Nicholas Cage and Holly Hunter play a dysfunctional couple who steal a baby to raise for their own!

In Sling Blade, rural Arkansas provides the backdrop for this story of a man released from a mental hospital after killing his parents as a kid. Also, who doesn't remember Billy Bob Thornton saying, "Gimme some of them French fried potaters"?

It's really hard for any single movie to "capture" California, and there are so many. But Pulp Fiction has to take home the prize, because Tarantino's wild ride of a film isn't just an iconic Californian staple; it's a masterpiece that changed cinema, changed American culture, and remains one of the most quotable movies ever. Plus, Samuel L. Jackson's monologuing is just priceless.

"Heeeere's Johnny!" Everyone knows The Shining as the movie that made ax murderers and creepy twins a permanent horror staple...and it all took place in the secluded Overlook Hotel deep in the Colorado mountains.

This movie, set in the '70s Stepford, Connecticut, explored the idea that suburban life might not be all it's cracked up to be!

To think, Miami officials actually thought that the film Scarface would ruin Miami tourism! Never mind that the movie was actually shot in Los Angeles; Scarface instead became as iconic as its main character Tony Montana. ...And look, it's not an entirely inaccurate depiction of the Sunshine State!

Georgia - "Gone with the Wind"

Gone with the Wind, despite being made all the way back in 1939, still holds a place as one of the most epic romance films of all time as it takes viewers from Antebellum to Reconstruction Era Georgia throughout the Civil War.

Look, animated features can be just as iconic as the old, serious Hollywood films! And there's just too much joy to be found in Disney's Lilo and Stitch for it to be excluded from this list.

This cult classic set in Preston, Idaho, actually generated $1 million for the city! Now that's how you make a tourism-friendly movie. Turns out, the magic formula is to tell a story about a bespectacled kid trying to get his friend Pedro elected as class president!

"Bueller...Bueller?" Director John Hughes basically made his career with movies set in Illinois, but Ferris Bueller's Day Off is his love letter to the city of Chicago. There's really no other movie that so wholly encompasses the spirit of Chicago--and Illinois--like this one!

Turns out, one Indiana kid's dream of getting a Red Ryder BB gun for Christmas makes for the ultimate holiday film. Plus, it taught kids everywhere that playing underneath icicles and licking metal poles in the dead of winter is a very bad idea.

In this fantasy-sports drama, Kevin Costner builds a baseball field and simultaneously answers the question, "Is this heaven?" / "No, it's Iowa." Honestly, if there's anything that's quintessentially Iowa, it's a good ol' cornfield.

Kansas - "The Wizard of Oz"

Here's another that we all probably saw coming, but come on. There's no place like home, and in this movie, "home" is Kansas--no matter how far that yellow brick road leads!

Coal Miner's Daughter is based on the true story of singer Loretta Lynn; technically, it's about making it out of Kentucky and into the big leagues, but there's still plenty of backwoods Kentucky in the film.

This now-iconic movie (which won the Oscar in its year) is harsh and truthful, but meaningful beyond the borders of Louisiana, where it is set.

The Shawshank Redemption doesn't show off too much of Maine beyond the walls of the penitentiary where Andy Dufresne is wrongfully imprisoned, but it doesn't need to; that one moment where Andy embraces his freedom on a rainy night is more than enough.

While viewing Jaws might induce a certain fear of sharks, don't worry too much--just stay in the Boston area and you'll be fine! This marine masterpiece is now one of the most famous films of all time, and it took place on the shores of Massachusetts.

The city of Detroit is notorious for both its crime rates and for being "Motor City," and Robocop leans into both. The violent R-rated classic is set in Michigan, and is a wild ride from start to finish!

Fargo could've fallen under a couple of states, given that the name actually refers to Fargo, North Dakota, but this iconic movie is largely set in Minnesota--as the characters' strong accents will quickly prove!

Mississippi - "In the Heart of the Night"

This old movie was made right in the midst of the US civil rights movement and won the 1967 Academy Award for best film with its portrayal of a tension-filled Mississippi.

Carthage, Missouri is the setting for this mystery-thriller about a marriage on the brink of collapse, making it Missouri's most famous movie.

Montana - "Legends of the Fall"

Legends of the Fall is one of those classic Westerns, this one starring Brad Pitt, Anthony Hopkins, and Aidan Quinn. And though the movie itself is pretty tragic, at least we get to look at a gorgeous landscape while we tear up!

Yep, we went with the obvious: a movie titled after the state it's set in. Director Alexander Payne is from Nebraska, and consequentially sets most of his movies there.

Leaving Las Vegas is remembered not only as a darker portrayal of the wild Sin City but also as some of Nic Cage's best work! I guess we shouldn't be surprised that a crazy guy like Cage would really vibe with the chaos of Vegas.

Who could forget Robin Williams in Jumanji? The fictional Brantford, New Hampshire saw jungle animals storm the streets, and the film crew for Jumanji left an advertisement for Parrish Shoes in the downtown of the very real Keene, New Hampshire, where they filmed!

Kevin Smith's breakout role came in Clerks, the low-budget movie that developed a cult following after its release. It was shot in Leonardo, New Jersey, at the same convenience store where Smith had actually worked!

Clint Eastwood has always erred on the side of "grizzled gunslingers" in his movies, but his 1966 film The Good, the Bad, and the Ugly specifically took place in the deserts of New Mexico!

The Godfather isn't just a classic: this movie is touted by some as the greatest film of all time, and it's set in one of the prime locales for mob-related flicks--New York, New York. Even decades after its release, no crime movie has been able to top The Godfather's genius.

The Durham's Bulls are a North Carolinian minor-league baseball team, so the state connection is right there in the title! Bull Durham is a sports-comedy film centered on the experiences of both team and its fans.

And now it's time for a superhero movie addition to this list! Although, Logan isn't your typical superhero flick at all, and the dramatic backdrop of North Dakota was there to reinforce the movie's lofty goals.

Ohio - "Silence of the Lambs"

Silence of the Lambs is the thriller that brought the terrifying Hannibal Lector to screens everywhere. Similarly, the movie's connection to Ohio isn't all that nice, but certainly significant: it's the state where Buffalo Bill nabbed his first victim.

One of the most iconic (and uproariously fun) natural disaster movies, Twister takes its viewers through the state of Oklahoma in the midst of a chain of storms. You can even go and visit the Twister museum in the town of Wakita!

The Goonies is a classic tale of teenage misfits set in the totally real Astoria, Oregon--and you can see some of the iconic locales there today, the Clatsop County Jail and the Flavel House Museum included!

Pennsylvania knows what it has in the film Rocky; fans can go and visit two of Philadelphia's more popular tourist attractions, the Rocky Statue and the "Rocky Steps."

Rhode Island carries a quaint New England vibe and translates that to The Conjuring. A quaint vibe...for an absolute horror-show of a story! The critically acclaimed ghostly movie makes good use of its seemingly harmless Rhode Island surroundings.

Who hasn't seen a picture of one of the most iconic cinema kisses ever? The romance between Allie and Noah also manages to show off the beauty of Charleston, South Carolina.

There's still a museum in South Dakota filled with memorabilia from Oscar-winning film Dances With Wolves. The movie's main character goes and admires the countryside in South Dakota, so we figure that means we should, too!

I mean, are we really surprised a movie about a crazy guy with a chainsaw came from Texas?! For real, though, The Texas Chainsaw Massacre is another one of those horror staples that transformed the genre, and it was all filmed and set in the state itself.

This harrowing movie is based on a true story and was shot on location in Utah. The state even put out a list of excursions that visitors could make to filming locations!

Super Troopers definitely didn't seem like it was going to be one of Vermont's most famous movies when it came out, but the movie's cult following allow it to make its mark on cinematic history.

Remember the Titans is based on the real-life T.C. Williams High School football team and the mark it made on Alexandria, Virginia in the midst of the civil rights struggle.

Look, not many other 'famous movie' lists are gonna say this, but it's true. The weather in Washington is literally brought up in the first paragraph of Twilight! It's a teen-vampire-romance about vampires who live where they do because it's just so dang easy. So, love it or hate it, Twilight is most definitely one of the most famous movies set in the state of Washington.

Everyone knows that West Virginia is coal country, and October Sky explores that long tradition of coal mining through the lens of a young man who wants to do something else with his life.

Wisconsin - "Dawn of the Dead"

Set in the fictional town of Everett, Wisconsin, Dawn of the Dead is a famous Romero zombie film following a band of survivors holed up in a zombie-infested mall!

And finally, we have Unforgiven: another Clint Eastwood classic western, this time with a backdrop in the gorgeous rural Wyoming landscape. What other state-specific movies can you think of? Share this list with your film-junkie friends and see if they agree!