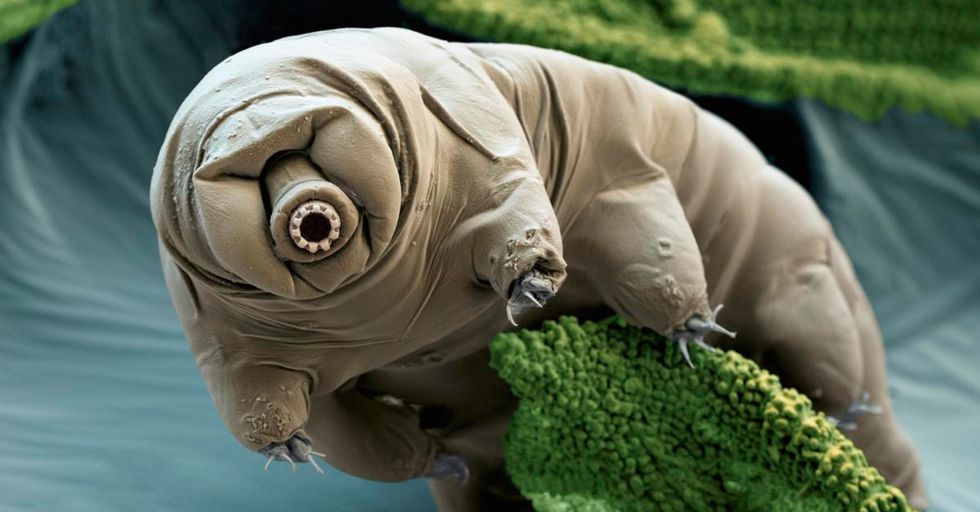 While we're out laughing at memes and staring at pictures of dogs wearing hats, there's a whole other dark world looming in existence. I'm talking weird, creepy, make-your-skin-crawl kind of things. It's not just the stuff we read in books or see in movies.

I'm talking things like, a pair of pants made out of human skin, or a frog that breaks its own bones to grow claws. There's some serious sci-fi stuff going on. You can't make this stuff up.

Just in time for the spooky season, here are some real-life horror stories to freak you out and give you the heebie-jeebies.

Also, this list is quite random because fear comes in all shapes and sizes.

It's about to get pretty spooky over here.

Where do spacecraft go to die? Point Nemo in the Pacific Ocean is the watery graveyard for many, but probably not f… https://t.co/wqccd5tISS
— AFP News Agency (@AFP News Agency)1522546948.0

You have to see it to believe it

Point Nemo is an area of the ocean which is furthest from land. To put it in perspective, the nearest place is 1,670 miles away. So if you're the king or queen of introversion, Point Nemo might be made for you.

Its eerie and ominous location has people creeped out because it is so far from civilization. Also, "Nemo" translates to nobody in Latin... This just sounds like a weird conspiracy theory in the making.

i learn about prion diseases every semester and i become extremely paranoid of getting a prion disease EVERY SEMESTER
— destiny 🦩 (@destiny 🦩)1536678815.0

I'm no doctor, but this sounds pretty serious. Prions are types of proteins in our bodies that can spark normal proteins to fold the wrong way. This can cause fatal neurodegenerative diseases in animals and humans.

Even hospitals are afraid of it

"I work at a hospital. We operated on a patient, a few weeks later patient tested positive for prions," said one Reddit user. "Had to dip all of our instrumentation in ACID and reprocess, because when you wash an infected kit you cross contaminate all your other kits... Literally, flesh dissolving chemicals like prolystica just don't do anything to them. We have hundreds of surgical kits, it took a week of nonstop work to be sure we were safe for operating. Prions are scary sh**. They'll turn your brain into a sponge."

The Center for Disease Control and Prevention says, "the abnormal folding of the prion proteins leads to brain damage and the characteristic signs and symptoms of the disease... Prion diseases are usually rapidly progressive and always fatal." That's terrifying.

Chlorine Trifluoride is an odorless, colorless, poisonous and corrosive gas that is extremely reactive. Basically, it's deadly and strong enough to burn through any glass.

It can also light things on fire without an ignition source and this "nope" gas can create its own oxygen during reactions, so it will burn things without the need for air. Scared yet?

Yeah, you can keep me away from this stuff

Oh, also, if it's under prolonged exposure to fire or intense heat, the chemical can violently rupture and rocket. I think I want absolutely nothing to do with this.

I know it doesn't actually look like a carrot. It kind of looks like a beautiful flower. But don't be fooled, and definitely, don't take a big whiff of this. Poison hemlock (its real name) is a plant that is part of the carrot family. If you come in contact with it, it can blind and burn you.

Thanks to the resident that reported this giant hogweed; Crews removed it this morning. Your quick thinking stopped… https://t.co/2dOAw1cCHX
— City of Guelph (@City of Guelph)1531245487.0

If you touch this plant, you can get severe burns all over your skin, and if the sap gets in your eyes, it can permanently blind you.

It can grow up to 14 feet tall and can be found in New York, Pennsylvania, Ohio, Maryland, Oregon, Washington, Michigan, Virginia, Vermont, New Hampshire, and Maine. This evil plant is no joke.

Sounds cute, right? Their real name is tardigrades, but they go by water bears. They are a minute invertebrate with a short, plump body and four pairs of stubby legs, that live in water. The scary thing is their ability to survive nearly anything.

To infinity and beyond

These microscopic creatures can survive IN SPACE and scientists have predicted that they may outlive humankind. The dagger-teeth creatures have outlived dinosaurs, and they show no signs of stopping. Thankfully, they are harmless to us humans.

Fibrodysplasia ossificans progressiva, or FOP, has been given the nickname Stone Man Syndrome. If you contract this rare disease, it will slowly turn your connective tissue such as tendons, muscles, and ligaments, into bone.

You basically grow a second skeleton

The Wikipedia page is WHACK. "Surgical removal of the extra bone growths has been shown to cause the body to 'repair' the affected area with even more bone." Basically, if you try to treat it, it just gets worse. What is this sorcery?

The disease affects one in two million people, which makes it seem like the odds are in our favor...right?

Have You Heard of The Aztec Death Whistle That Sounds Like Blood-Curdling Screams? https://t.co/z6NoWe67On https://t.co/CgTgBUJ4nP
— GeekTyrant (@GeekTyrant)1533072004.0

The name itself should strike some fear into you, but once you hear the sound it makes, you will never be able to un-hear it.

The scariest sound ever

If you thought your mom yelling your full name in public was scary, wait until you hear this. Be careful with the volume on this video. It is LOUD and TERRIFYING. He starts blowing the whistle at around 52 seconds, which is just enough time for you to hide under your covers.

Doesn't it sound like a million people screaming at once?! I hope I never have to hear that noise again. Some research into this death whistle says it might have been used as a war tactic, which would be very useful considering it might scare the life out of your enemies! But, it was most likely used for human sacrifices which is equally as terrifying.

This guy is commonly referred to as the "Hairy Frog" or the "Horror Frog," and is truly one of a kind. This frog breaks its own bones in order to produce claws, kind of like Wolverine.

The Hugh Jackman of frogs

It is assumed by scientists that they use these claws in defense, and when they are done using them, they just retract and the skin around it regenerates. Pretty freaking creepy.

This might give you some serious chills, and not the good kind... They seem like cute, fuzzy little creatures, but they are evil, terrifying, creatures that will ruin your life.

This fly leaves its larvae on other bugs, like mosquitos, which then can be transferred to people, allowing the larvae to grow under your skin and feast on your flesh. If you want to know more, go to the Wikipedia page, or if you are really feeling brave and you have a strong stomach, watch some YouTube videos about them.

These "pants" are made out of the skin of a dead man. This display can be found at the Museum of Icelandic Sorcery and Witchcraft. Some weird stuff is going down in Iceland.

The story behind the skin pants

According to old Icelandic rituals, this was done in order to gain an endless supply of money. This is how Wikipedia describes the ritual: "If you want to make your own necropants you have to get permission from a living man to use his skin after his death. After he has been buried, you must dig up his body and flay the skin of the corpse in one piece from the waist down. As soon as you step into the pants, they will stick to your own skin. A coin must be stolen from a poor widow and placed in the scrotum along with the magical sign, nábrókarstafur, written on a piece of paper. Consequently, the coin will draw money into the scrotum so that it will never be empty, as long as the original coin is not removed. To ensure salvation, the owner has to convince someone else to take ownership of the pants and step into each leg as soon as he gets out of it. The necropants will thus keep the money-gathering nature for generations."

I think I'm going to be sick

Pants? Made of someone else's skin?! This is truly disturbing. That sounds like a test of true friendship, letting your friend cut their skin off after they die to turn it into some pants just to make money.

Okay now that all the creepy things are done, here's a video of puppies doing some cute, silly stuff that will lighten up the mood.

Now you can spread the creepiness

Share this with your friends to get them in the mood for the spooky season, or just to creep them out.