These Are the Most Frightening Pictures on the Internet | 22 Words 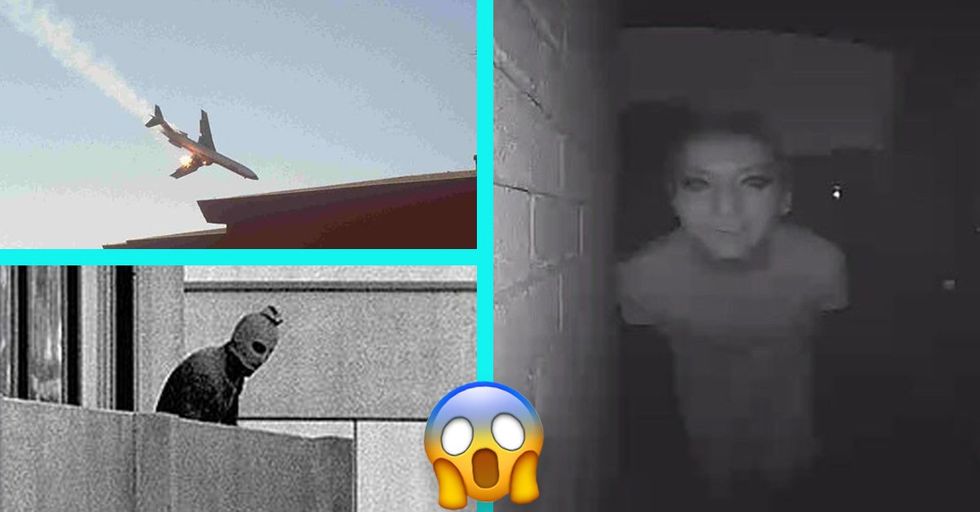 These Are the Most Frightening Pictures on the Internet

The internet isn't all sunshine and roses; over the years, people have managed to capture and share images of the truly grim and downright horrifying.

This photo captures a terrorist during the Munich Massacre in 1972.

I’ve always found the Munich Massacre picture to be eerie and unsettling. -BossFightFlavorText

Pacific Southwest Airlines, Flight 182: September 25, 1978. Roughly five seconds to impact in a San Diego suburb after colliding with a Cessna on approach. -bethster2000

This mummy was discovered in a drifting ghost-ship.

This one stuck with me for a while. -Gunz7781 A mummified ship captain was found in a half-submerged ship, which sailed on undiscovered for seven years after his death.

These truly terrifying images look like they should be straight out of a home invasion horror movie.

"Got a notification from my smart home app in the middle of the night saying 'Your doorbell detected a visitor.' Yes, this was real. Basically, I kept getting notifications on my app that my doorbell detected a visitor, yet when i checked the first few times nothing appeared, and figured it was maybe a stray dog or someone on the sidewalk being detected by the sensor. Several notifications later I checked again and this is what appeared. Yes I am alive" -FatNDepressed

Decades after its capture, this photo is still used to educate people on the danger of lightning strikes.

Been through most of the thread and didn’t see this one yet. In 1975 two brothers, Michael(18) and Sean(12) Mcquilken of San Diego ascended up Moro Rock in Sequoia National Park. It was a stormy day and their sister Mary(15) took this photo as they were amused. It began to hail, and as they were descending Sean was struck by lightning. -surzirra

The Elephant's Foot: it's the melted reactor core in Chernobyl. The amount of radiation from it was fatal within a minute and even a short exposure would leave you sick and dizzy for weeks afterward. At the time the picture was taken it would be "safer" to approach but still fatal within 500 seconds. -ONI_Section_3 The graininess of the photo is in fact not age, but trace amounts of radiation affecting its quality.

There are several notable and chilling photos capturing the last moments of their subjects.

This one is scary because of how normal it seems. It's the last picture taken of 18-year-old Jolee Callan before her boyfriend shot her twice in the head and pushed her body off the cliff. --eDgAR-

The Falling Man for me. -Miss_Keys For more context, this photo was taken during the 9/11 terrorist attack, when people began jumping from the top floors of the towers, knowing they weren't going to survive.

The remains of the astronaut Vladimir Komarov, a man who fell from space, 1967. -coxeta Komarov knew the space capsule wasn’t flight-ready, but also knew that if he declined to fly, his backup and best friend Yuri Gagarin would have to make the fatal trip instead. Komarov decided to sacrifice himself, and refused to let Gagarin board the vessel during takeoff. As the capsule inevitably malfunctioned and fell from orbit, with Komarov headed to his doom, US listening posts in Turkey heard him crying in rage and "cursing the people who had put him inside a botched spaceship."

These photos are stark reminders of the horrors of war.

This picture of a shellshocked soldier of WW1 always gives me the creeps. -Grownassmidget

These shadow-imprints were all that remained of many people caught in the horrific WWII bombing of Hiroshima, Japan.

The Ruins of Dresden after WWII gets me every time. It just gives me this weird feeling that's something in between sorrow and sheer astonishment. -Popular_Potpourri

Two people atop a burring windmill hold each other as they face death. -loweffortmetajoke

The haunting pictures of the Jonestown Massacre capture the largest loss of American life due to non-natural causes before 9/11. 909 members of the People’s Temple cult died on the orders of cult leader Jim Jones.

96 people died because of stadium overcrowding in the Hillsborough Disaster. People were forced to climb the fence between the field and stands to escape death by trampling and asphyxiation.

This photo was taken of a vulture stalking a starving child in the Sudan. Thankfully, there is a happy ending: the boy's name was Kong Nyong, and he survived and recovered from the famine after the picture was taken.

This photo has been used to suggest the possibility of spontaneous human combustion.

Not sure if it’s “scary" but a lot of these seem to be just unsettling or creepy. -floopledoop Pictured above are the remains of Mary Reeser, whose death may have been a case of spontaneous human combustion.

These photos are a mysterious documentation of the last days of two lost hikers.

Basically, two girls disappear during a hike in Panama. 10 weeks later, their remains are found, just bone fragments and a few of their equipment is left. There is a camera that has images. It starts off with normal images of the girls playing around as you would on a hike. You can see in the images they get lost at some point. The images abruptly stop after that. About 10 days later, 90 images are taken, most are dark, but a few show rocks and branches. One shows a bloodied hair of one of the girls. The fate of the girls during and after those ten days leading to their deaths remains a mystery. All we know is that they attempted a few times to call the police, but no reception. The last being ten days after the disappearance. . -aj240

A network of tunnels underneath Odessa, Ukraine make up the Odessa Catacombs—which are even larger than the catacombs of Paris. Most frighteningly about these catacombs are the number of people who have died there, either by murder or by simply getting lost and never emerging. A young woman, Masha, took a wrong turn and became lost, perishing in the catacombs in 2005, and her body was not retrieved for two years after that.

And speaking of the Paris Catacombs...

Waverly Hills Sanatorium was a tuberculosis treatment center, from 1926 through 1961. Large numbers of people perished within the hospital, and their bodies were taken out of the hospital through this ghastly-looking chute.

Gas masks on the floor of a school in Pripyat inside the Chernobyl exclusion zone, Ukraine. -KoiMasterFlex

Jack the Ripper's "From Hell" letter from October 15, 1888.  -Futurist110 Jack the Ripper was, as you may well know, one of the most well-known and feared serial killers in history.

Beauty procedures in the 30s-40s looked daunting, to say the least.

‘Freezing’ freckles off with carbon dioxide was a popular treatment in the thirties. Patients’ eyes were covered with airtight plugs, their nostrils were filled in for protection, and they had to breathe through a tube. -Seantastic1

The Church of Saint Michael in Austria has over 700 painted skulls in its chapel basement known as the "Bone House." -dareeza

The Bone Cancer Skull. Just imagine how much that would hurt, growing through your skin and eyes. -Frolb

With context, the photo becomes less creepy. Without it...

Figures salvaged from a fire at Madame Tussaud's Wax Museum in London, 1925.

An Iron Lung ward. -notfromhere23 Rows of Iron Lungs (tank respirators developed to treat polio patients unable to breathe on their own) filled hospitals in the 1940s and 1950s during the worst of the polio outbreaks.

The tulip staircase ghost was supposedly captured on camera.

This infamous ghostly photo was taken in the Queen’s House section of the National Maritime Museum in Greenwich, England in 1966. In the photo, you can see a shrouded figure appear to be roaming the stairs, grasping the railing; this picture is one of many claims of ghostly activity within Queen’s House. Whether or not you believe in ghosts, the photo remains pretty creepy.

Gas masks for babies tested at an English hospital, 1940. -JustBlue

Wedding rings of Jewish Holocaust victims in 1945. These rings were previously removed from the hands of their victims by the Nazis in order to salvage the gold in these rings. -Futurist110

Colleen Stan with her kidnapper, Cameron Hooker (c. late 1970's) -PrimateAndStuff For those unfamiliar with the case, Colleen Stan was kidnapped, held captive and tortured for seven years by Cameron Hooker. This photo was taken during her imprisonment in the late 70s.

The gentleman depicted is Martin Laurello, born Martin Emmerling, and he hailed from Nuremburg, Germany. He was an anatomical wonder, able to turn his head 180 degrees. -JTithonus

John Lennon signs an autograph for the man who would murder him.

At a glance, this photo is of John Lennon signing a fan’s copy of Double Fantasy. That fan turned out to be Mark David Chapman, and it was the last photo ever taken of John before his death later that evening. -JohnTheMod

Stare at the Engraved Hourglass Nebula, and it stares right back.

The Hubble Space Telescope captured this image of the Hourglass Nebula, beautiful and eerie in its own way. The way this image was taken, the nebula's center does appear to be meeting the gaze of the viewer.