Women Share the Most Infuriating, Hilarious Things Men Have Mansplained to Them | 22 Words 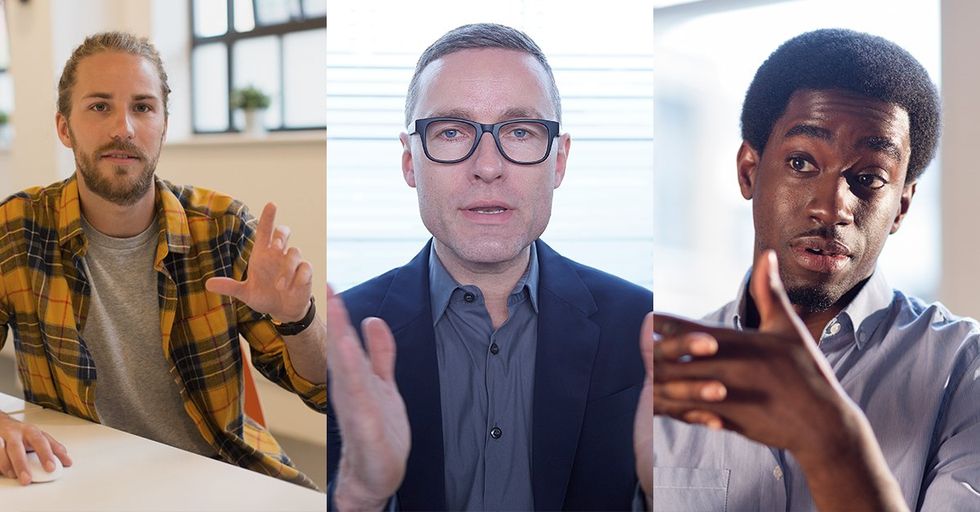 Women Share the Most Infuriating, Hilarious Things Men Have Mansplained to Them

I am going to start this with a joke because the rest of this article is not going to be very laughable. This is a joke that I had heard before but was reminded of while perusing this thread of truly infuriating accounts of women being mansplained to by men. The joke goes like this:

Where does a man get his water?

From a well, actually.

It is a pretty funny joke. You laugh at it because it is true. When you think about how prevalent mansplaining is and the meaning of it — man's refusal to see women as fully-formed human beings with the ability to have vast and deep wells of their own knowledge — it is intensely infuriating.

Even "woke" men, and guys who would consider themselves allies and feminists have mansplained before. The idea that a woman could not possibly know as much as a man or the idea that even if she does, she will appreciate hearing a man blabber on because they deserve to be heard, is so pervasive in our world. These instances of women being mansplained to will and should make you angry. Hopefully, they'll make men a little more aware of their actions and women feel a little less insane and alone.

Tracy Ann Clayton, a writer and podcast host, posed this question to her Twitter followers:

And as you might imagine, women from all over the world had answers at the ready. There are almost 4,000 responses to this tweet, and many of them will make steam come out of your ears.

Can you imagine what would happen if a woman asked a man, "Are you sure this is the address where you live? Because I cannot find it"? Yeah. That would not fly.

It is so infuriating when men cannot fathom that a woman would know anything about cars or sports or subjects that are traditionally seen as "male."

This woman has had linguistics explained to her. From her Twitter bio, it is clear that she is an expert in linguistics. A doctor of it, even. The women buying makeup being responsible for poverty thing is so crazy I can't even address it.

Hear that?! She! Was! The! Artist! On another note, this tweet is a haiku, and it is perfect.

@brokeymcpoverty a boss mansplained taking a phone message "just answer it, see who it is, write it down, tell them I'll call them back"
— 🕸spooky BOOschoff🕸 (@🕸spooky BOOschoff🕸)1490196515.0

This is an adult woman who, no doubt, has taken many phone messages in her life, and, if she hasn't, has the mental capacity to figure it out.

.@brokeymcpoverty had a journalism student take over my lecture to explain to the class why the math I was doing was wrong. He was wrong.
— Jessica Huseman (@Jessica Huseman)1490189099.0

This is amazing. She goes on to explain that after he was done with his nonsense, she redid her work and had another student explain to him why he was wrong. I wish I could have seen the look on his face.

How a maxipad should be worn. So you ladies know: the proper way, as was mansplained to me, is sticky side to the curlies @brokeymcpoverty
— Turing Pest (@Turing Pest)1490166061.0

This is beyond. How would it ever make sense this way? Why would a man profess to know?! This is next level mansplaining.

How pedophiles are actually fine

This is one of those situations where you back slowly away as the guy is talking and go report everything he's saying to the police. Holy cow.

This is rich. He quickly realizes that the cord was too short and then also didn't know what to do about it. Of course.

How no women wrote in the Middle Ages

@brokeymcpoverty men regularly try to explain that there weren't women writing in the Middle Ages (I have a PhD in medieval women's writing)
— Kathryn Maude (@Kathryn Maude)1490104991.0

Guys! She has a Ph.D. in the subject! I think she should know. And I think there's probably enough material to warrant a Ph.D.!

@brokeymcpoverty I once had a friend mansplain to my roommate how to ~correctly~ pronounce her own name bc he thought she was doing it wrong
— Aja Romano (@Aja Romano)1490117092.0

So many of these make me want to shout, "Oh hell no!" from the rooftops. This is bonkers! Men, stop and ask yourself how a woman could possibly not know the correct way to pronounce her own name. Then shut up forever.

I don't know what it is about men who see a woman in a specific shirt, but they immediately want to explain that thing to them, as if that woman isn't wearing that shirt specifically because she is a fan of that thing.

That they weren't on "real Jeopardy!"

@CopyrightLibn @brokeymcpoverty a dude told me after hearing abt my Jeopardy! shows that I must have been on teen/kids J!, not "real J!".
— Alysha Rooks (@Alysha Rooks)1490114319.0

How could a woman possibly compete on real Jeopardy!? I bet that woman knows more trivia about the world than that man knows about his own you-kn0w-what.

I want to bury my head in the sand. This is presumably an adult man who thinks that every woman gets her period on the same exact day of every month. What.

Why would anyone not know what a bike lock is for? It's right there in the name. This is truly a guy who just likes to hear himself talk.

@brokeymcpoverty I've had men try to explain supply and demand to me. I have a Masters in economics.
— Julie Fauble (@Julie Fauble)1490144963.0

She has a masters in economics, but you don't even need that to understand the basics of supply and demand. You learn that in like, middle school.

How to fix computers

If you wanted to fix your computer yourself, why did you bring it to someone at the genius bar?! She obviously knows more than you. Let her do it.

@brokeymcpoverty my son mansplaining how hard it is to cook, clean, shop, go to school, wash, work p/t when I left him home alone for a week
— TheMarketingGurl (@TheMarketingGurl)1490182967.0

Raise your hand if you've ever experienced a man going, "Wow, you do a lot" after being left to fend for themselves for like, a day. Yeah. I thought so. It's called emotional labor, dudes, and we women do all of it.

What exact point was he trying to prove here because I bet he actually proved the opposite.

The audacity of trying to teach a French woman French! When you yourself are not French! What!

When babies are coming

Listen, doc, if a woman is screaming that her baby is coming (it's her body, so she probably knows), don't duck out of the room for a Coke!

@GrettaLouw @brokeymcpoverty Similar, I had a dude tryna mansplain selective breeding to me AFTER I told him I'd developed a new breed of 🐰
— April Spectrum (@April Spectrum)1490183324.0

This is so frustrating. But also, what is this new breed of bunny? Can I see it and can I have one?

@brokeymcpoverty A US man w/ no connection to Brazil tried to explain Brazil's economy to me after I'd covered it for years from Sao Paulo
— Luciana Lopez (@Luciana Lopez)1490195992.0

If men could just shut their pieholes for one minute and listen, they would actually be able to learn things from women who know better than them, which would actually make them smarter. It's like they are willfully remaining stupid.

Why breastfeeding in public is unacceptable

This deserves an "OH NO YOU DIDN'T!" for sure. Breastfeeding is natural. Stop sexualizing breasts. Stop it. You there, stop it.

I guarantee you this man has never been around a woman while she was orgasming. So sure about that.

Yeah, that's going to be a hard pass from me. Don't do that, men. Or anything like it.

That she was bench pressing too much

She's a world champion! A world record holder! I hope she told him that and then bench pressed his scrawny ass right out of the gym.

If men really knew how much physical pain women deal with on the reg, not to mention during childbirth, they would bow at our feet constantly. Share this with an equally pissed-off woman!