The Most Outrageous Things Ever Caught on Security Cameras | 22 Words 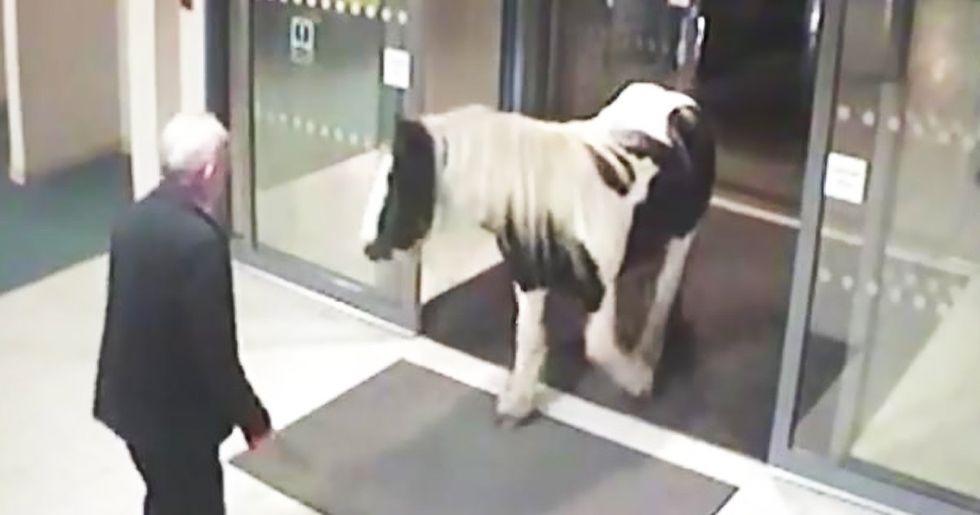 The Most Outrageous Things Ever Caught on Security Cameras

A few years ago, my husband and I purchased one of those fancy security cameras for our apartment before leaving on vacation. Our landlords at the time were a little sketchy and had a habit of "dropping in" unannounced, so we figured, hey — better safe than sorry.

In the years since our purchase, we have never captured video of our landlords, neighbors, or anyone else doing anything even remotely questionable. What we have captured on video is way better, though. Things like our dog accidentally falling behind the couch when he tried to jump onto the back of it, our dog stealing a piece of toast right after I put it on the table, and our dog farting himself awake from a nap. Mostly just funny clips of our dog, if I'm being honest.

Obviously, security cameras can provide authorities with video evidence that may help in an investigation, and that's great! But they also do a great job of capturing funny events that may otherwise have gone unnoticed. Here are some hilarious events as seen by security cameras.

Don't worry; no one was harmed in this video. Still. Next time you see something with a trigger coming down the recycling line, maybe don't pull that trigger?

Look at the angle at which he's holding that bowl. I mean, how could he not realize he was going to spill some of that liquid on the floor?

You can do your job 99 percent correctly, but rest assured that your boss will be in the room as soon as you make a mistake. That's just the way it works.

That cat is clearly up to no good. Then again, that could be said about most cats.

Seeing the aftermath is great, but actually watching the footage of the big spill? Priceless.

I've never been chased by a rooster before, but I have to assume that if I were in the same position as this woman, I would look much more panicked.

Someone give that bird a medal! And then give him a sandwich. He looks hungry.

There's nothing you can do but watch as your home is destroyed. At least your puppy is super cute, though.

See? If you didn't have a camera hooked up, you would have missed out on this cinematic masterpiece. There's so much to unpack here. Aren't you glad it's on video?

Hey, maybe the cat's name was Bob. Yeah. Let's go with that.

Just seeing this still image is enough to give me the willies. I can only imagine how freaked out the family must have been.

Oh, to be a child again. When you can just hop around like this any nobody cares.

This kid is going places. Jail, for instance.

Hawk and the weathercam.

Is it just me, or can you hear this somehow, even though there's no sound? Weird.

Just another example of the unrealistic beauty standards set by archery targets.

Oh, you mean you don't go to your office to practice your jousting on Saturdays? Pfft. Casual.

Doors, am I right?

Hey, doors are hard. That's why you should try to keep your head away from them.

If you work hard to get big muscles, you deserve to check yourself out in the security camera monitor. Sorry. That's just a fact.

OK, this is adorable.

I find myself suddenly wanting both a doorbell camera and a child.

Does anyone else find this oddly beautiful? I can't stop watching.

The next time your kids ask you how the dinosaurs went extinct, just show them this video. It happened just like that. Basically.

Someone actually stole the SD card from a trail cam and edited this image in before replacing it in the camera. My favorite kind of crime.

This is why we don't run in the hallways. Honestly, I thought you would have known that already.

Wow! How can I be this cool? This guy is so cool. I am very jealous of how cool he is.

Employee of the month.

Give this man a raise! And more poster board. I want to see what he comes up with next.

I like cats, but I also like seeing them completely fail at making jump calculations and then falling. So sue me.

Thanks for the reminder of the fact that I do not miss college even a little, little bit.

The last thing your camera saw.

Hm. Something tells me that baby might be involved with the camera being offline. Just a hunch.

The cat does not approve.

At least you have an up-close view of what's going on with your carpet, though. That's also good to have.

Security camera is confused between human face and a Halloween skull decoration O_o This happened while we were decorating for Halloween. : funny from funny

Halloween decorations must really throw security cameras for a loop. Bless them for continuing to do their job, though. Ready for more perfectly timed photos?