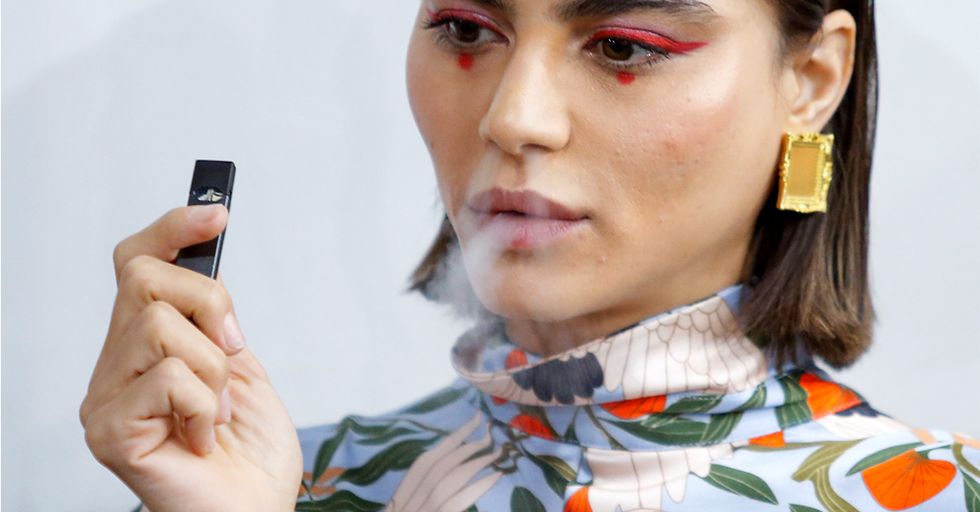 Most Parents Think This is a USB, But It's Actually Something Much More Sinister

Cigarettes are out, and juuling is in. If you don't know what that is, you really should. Today's youth have declared that juuling is the next 'cool' thing.

That is to say, the particular brand of pocket vape called, "JUUL" has recently exploded in popularity. Recent inquiries have found that JUULs are everywhere in middle and high schools. The device's design makes it hard to catch and curb the frequency of its use. So, if you have teenagers, now may be the time to talk to them about the JUUL trend.

What's the difference between smoking, vaping, and pod vaping systems? How serious is this new fad?

We cover all this and more in our story, so scroll down to read up on the JUUL craze sweeping the United States.

This is a JUUL.

It accounts for about 72 percent of the market share of vaping products in the US currently, and teenagers love it.

JUULs (and pod systems) are supposedly more convenient to use than regular cigarettes.

JUULs are a type of e-cigarette pod system. Pod systems are marketed as a no-fuss alternative to cigarettes, with a bigger battery than regular e-cigarettes for longer use. They consist of a pocket vaporizer and nicotine juice cartridges.

E-cigarettes came to prominence in 2007.

Two graduate students at Stanford came up with the idea in 2007, as part of their thesis. Their goal was to create an alternative that satisfied like a cigarette.

It has other applications.

Some people use their devices to vape THC (the chemical in marijuana that affects your mind), and synthetic drugs like flakka.

If you see someone sucking on an object that looks like a USB stick, it may actually be a JUUL (or similar product). The JUUL, a pod vape, is becoming more popular than regular e-cigarettes.

In fact, the JUUL is the fastest-growing e-cigarette on the US market.

And it’s also gaining popularity in overseas markets, like in the UK.

The JUUL has a specific demographic.

It’s immensely popular with younger generations, both for their high levels of nicotine and sleek, appealing design.

JUULs are also popular for their flavorings.

Along with the nicotine, JUUL pods come in alluring flavors such as fruit medley, creme brûlée, and mango.

What’s the difference between vaping vs. smoking?

E-cigarettes, unlike their regular counterparts, do not make tobacco smoke. There is no combustion involved at all in e-cigarettes, let alone the burning of tobacco.

In fact, the FDA is considering outlawing the device entirely, particularly if the company that makes them doesn’t attempt to curb their use among teenagers.

The FDA is definitely cracking down on JUUL sales already.

Earlier in the year, the FDA issued warning letters to stores like 7-Eleven and Shell, that were apparently selling pod vapes to underage kids. It also instituted age-compliance checks with retailers.

Specifically, the FDA wanted to know whether the company had conducted research on how kids might use a JUUL and whether certain designs of the JUUL were meant to appeal to youth.

The future of vaping is uncertain.

On the one hand, the FDA has acknowledged the usefulness of vaping and e-cigarettes in quitting smoking. On the other, concern over underage users is mounting, and it remains to be seen whether consumers or regulation will win out in the end.

In fact, there’s a whole JUUL hashtag on Instagram. The pod vape is customizable and popularized over social media.

The company made over $244 million in retail sales last year.

There’s not much long-term evidence proving that the vapor is less harmful than cigarette smoke. This leads doctor concerns about the number of teenagers using pod vapes.

Here’s what the research that does exist says:

Existing research suggests that e-cigarette vapor is less harmful because it doesn’t require the user to burn a material and inhale the carcinogens and toxins along with it.

However, nicotine is still apparent.

Nicotine is both dangerous and addictive, whether it’s in a cigarette or pod vape.

A recent report in the UK also gave doctors pause.

The report indicated that vaping can leave a person’s lungs more vulnerable to infection.

Although, more research should be conducted.

Without thorough, long-term research on the effects of pod vapes, we won’t know their full danger or potential.

It isn’t hard to find a JUUL.

In fact, JUULs have been appearing in high schools rapidly, with students everywhere clamoring to get their hands on one.

The New York Times investigated this uptick in JUUL ownership.

The paper found that some students have even begun stockpiling JUULs, which can then be distributed to classmates. This could also lead to kids tampering with the pod vape.

School officials have a hard time dealing with JUULs.

Since the pod vape is so small (and closely resembles a flash drive), they’re hard to recognize without looking closely. Their aerosol vapor dissipates quickly, which can also make it hard to catch students in the act.

When talking to your kids about JUULing, it’s important to remember a few things:

JUULs are exploding in popularity among adolescents for a reason. Some are doing it as a form of rebellion, and some are trying it to fit in (a struggle that many high schoolers face).

Get their perspective before trying to enforce yours.

Understanding where they’re coming from definitely helps communication. Share your concerns, but make sure they know it’s coming from a place of love, not just trying to be a killjoy.

Kids should know the potential risks of vaping.

There health issues related to the ingestion of nicotine (and tobacco, in the case of regular cigarettes). While vaping is an alternative to tobacco, that doesn’t mean it’s perfectly healthy—and teens should know that, too.

How high is "a high amount of nicotine?"

Every JUUL pod or flavor cartridge contains roughly the same amount of nicotine as a whole pack of cigarettes.

The e-liquid is turned into vapor and becomes propylene glycol or vegetable glycerin-based liquid. This, combined with nicotine, flavoring, and usually several other chemicals and metals.

Therefore, JUULs aren’t as effective as regular vapes for help in quitting smoking.

A regular vape is customizable, meaning you can control the amount of nicotine you intake. For people trying to quit smoking, this is a good way to wean yourself off of the habit. A JUUL, on the other hand, can’t be modified like that. That makes it easy to become, or stay, addicted. Share this important information with your friends!