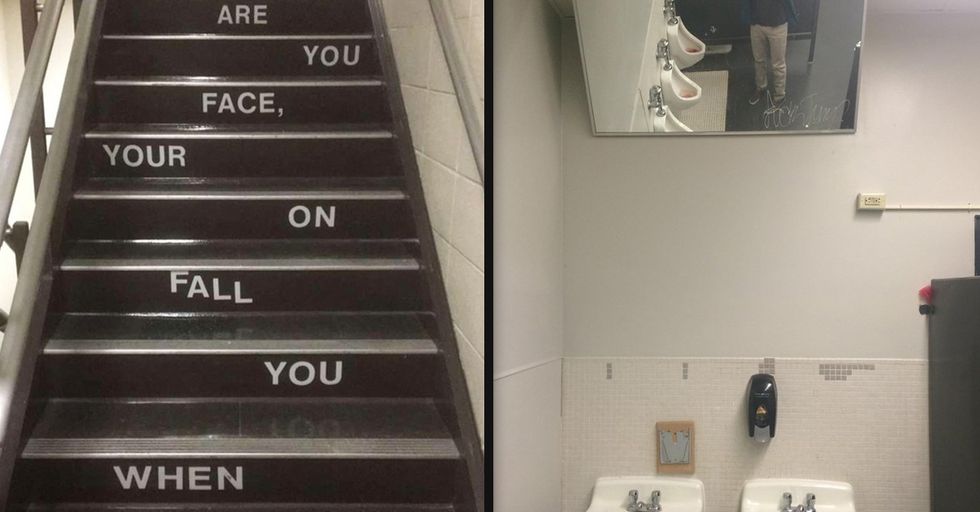 These Are the Most Poorly Designed Schools in the Country

Schools are supposed to be full of people who are smarter than you. People who you can learn from every single day. So when we see elements of schools, like their design choices, that make no sense, it is beyond unnerving. It makes you lose faith in the people who are supposed to be teaching you the ways of the world when you see things so outside of the realm of common sense, like a non-acrostic acrostic poem or a poorly-placed mirror in a men's restroom.

We all wish our schools were like the universities seen in movies — regal, with classy brick buildings full of books and serious academics. But instead, in many schools, there is an alarming number of posters that use Clip Art. Like, from Word programs. And it is 2018, we are about 20 years past the point of that being acceptable.

So please, feast your eyes on these design disasters. They will make you feel better about yourself.

These pictures will make you want to raise your hand and ask, "why?"

Why are some of these design choices so grating that you will get a chill up your spine? Try to make it through this list without crying. I dare you.

You know how to design

The funny thing about this illustration is that no matter which way you spin it, those gears aren't going anywhere!

Contrary to popular belief, this school's mascot is the Mustangs, not the MUUUSUTUAUNUGUS.

While this is an unreadable mess, I do have to confess that it is a fairly accurate representation about how most people feel when they are in high school.

Clearly, this was made by students on the very first day of graphic design class. I'm sure improved by a lot by the end of the year.

Not in our school!

Nice try, but it seems like you are trying to tell kids not to try to empower themselves or others in this school because you won't let it happen.

Falling on your face

This staircase seems to want to make you fall on your face, proving its point literally. Don't fall for it!

Almost nothing about this sign makes sense, from the vertical "CHAMP" to the number one to the final, ominous "get out."

I hope this isn't an engineering school, because this is pretty sad. The anxiety of not being about to lock the stall door is unbearable.

The sheet explaining class colors doesn't exactly work if you print the page in black and white! This is hysterical.

What were they thinking when they installed the overhead lights like this? Were they thinking, "Teenagers aren't confused enough when they're in high school? Let's mess with them even more?"

Remember when projectors and smartboards came into the classrooms and messed everything up? This ceiling fan knows that feeling well.

Inaccuracy on the playground

There is so much wrong with this depiction of the world that I don't even know where to start. How about with the scale of the astronaut?

Flush the drugs away

Apart from this sign being extremely hard to read, what exactly is the message here? Are they telling kids to flush their drugs down the toilet?

I understand that this is supposed to be a motivational screen, but it's causing me more anxiety than if there was nothing there at all.

So, as you know, having a message in Braille is useless if it's not raised. In fact, it's pretty insulting!

If you're not going to write an acrostic poem, don't use the form! It makes no sense. And the fact that they use the Curlz font makes my skin crawl.

Well, this is an inconvenient place to put that thing on the wall. It's very mysterious, and I don't like it.

Yeah, when your school starts with a K, maybe don't label three garbage cans with it and then stick them next to each other. That's not a good look.

I know this is supposed to make me less stressed, but all it makes me do is want to stress-eat a box of doughnuts. Goal not accomplished.

The silhouette of the girl in front of the girls' bathroom looks like she's holding handguns, which is decidedly not great!

I doubt the school is actually getting rich off the extra change that falls into the holes, but it's still a frustrating problem that could be easily fixed with a shift of the machine.

No, this wasn't posted in 1997. This was posted a month ago, which makes this totally unacceptable.

Not only does this apple look like the letter O, but it also resembles a vagina. Good luck getting that image out of your head.

This is vaguely sexual and also, why do they have a glowing read rim around them? Are they wrestling aliens from outer space?

Mirror mirror on the wall, why are you partly on the ceiling? The angle on this is horrifying.

Is it me, or do you also get the sense that this cluster of desks is anti-Semitic? Share this with someone who will cringe as much as you did!