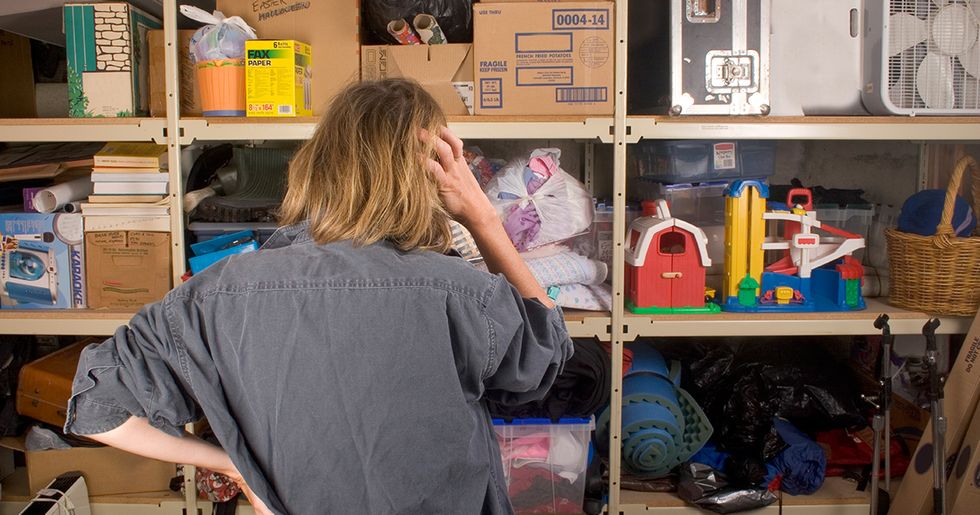 It probably wouldn't surprise you to hear that people own some really weird stuff. But if Reddit is any indication, you won't believe just how weird it gets!

There are plenty of ways to get your hands on unusual objects. Maybe you'll dig some strange family heirlooms out of an attic, or find a shop with unorthodox antiques. Or, hey, the internet is absolutely full of questionable things to buy or trade. And one way or another, the people on this list succeeded in collecting some really unique items.

Most of us are out here collecting coins, comic books, or something like that. And these people have taken collecting about ten steps further with all these insane items! So keep reading and see some of the most questionable things a person can possibly own.

How about an ancient artifact?

I have an ancient Corinthian helmet that I found in my parents' village. It's about 2500 years old. It may be illegal for me to hold onto.

Bonus points for the response.

It belongs in a museum! -Vincent__Vega So do you Doctor Jones! -acatlin Who can resist a good Indiana Jones joke?

It was a raccoon’s dick bone until my a**hole dog chewed it up. -RebelWithoutACog

What a strange collection hobby.

I collect somewhat grotesque and unusual items, and own several human skulls. Whilst not illegal to own, the most questionable one I bought from eBay in the USA before they banned them. It was listed as an old educational skull, bought from an estate sale, so I thought, 'fair enough' and bought it. -L1A1

Yeah, this is a horror movie in the making.

It eventually arrived with a whole bunch of China Post stamps on it, and when I removed it from the packaging and turned it the right way up, a bunch of soil fell out. So yeah, turns out I probably own the skull of a Chinese political prisoner. -L1A1

And here's an even WEIRDER use for human skulls:

I never partake. It's just too weird.

This was gifted in poor taste.

I just remembered that the event that the raffle was held was also a Wheelchair event, everyone was in chairs. And they thought to put a skateboard up for raffle. -Nicknack2121

Imagine such a gruesome piece of history in your house...

Deep in our basement, under a bunch of stuff - is a Nazi uniform. My family were all pacifist and did not serve. I have one uncle who was in the Naval Choir, but that's it.

Strange how easy it is to find such things.

We have part of a [Nazi] uniform in our house. My mom is German, and my dad was an American soldier. He went and found it somewhere when he was in Germany and brought it back home... This was in the '90s, so it really makes me wonder why it was so easy to find something like that. -kreminski

A bar of depleted uranium. -chronically_varelse

Well, at least it's being put to use.

Years ago I was ordering an adult toy and got confused between Imperial and metric and let's just say I've owned a very robust door stopper ever since. -DarlingBri

Some houses are decorated with flowers, some with creepy props.

A knife with fake blood.

A real knife, mind you.

...And then that particular thread got weirder.

I have a fake knife with real blood on it. -Corgitwiggle

And why, pray tell?

I was dressing up as Freddy Krueger for Halloween and long story short I stabbed somebody with a fake knife. -Corgitwiggle

A 2x2 foot bronze swastika. My family is Buddhist and it's an heirloom from Nepal. Still, though, I don't exactly leave it out on the coffee table as a conversation piece just in case. -_Iro_

I mean, people DO keep trophies.

The platinum trophy for Hanna Montana the videogame. -cheesyvoetjes

Of all the dollar bills to have in your possession...

A dollar bill that has written on it: “This was in a strippers butthole". At first, I thought it was kind of a cool thing to have, now I don’t really want to touch it. -sephstorm

Is this person a cat burglar?

I still think this is better than just plain Teletubbies.

Well, they're a nice family!

A friend of mine went through a rough break up. He took down all the pictures of his ex and replaced them with pictures of the family from Family Matters. My friend is white. -Corgitwiggle

Be careful what you wish for.

My amazon wish list had been bled dry before my birthday, and the only thing I could think to ask for was a nice pillow. Some buddies took it upon themselves to buy me a waifu body pillow. -GeraldFord210

I have a silicone lamp in the shape of a butt that turns on/off when you slap a cheek. -Chinstrap_1

These must be a pain to put on, though.

Bonus for where this Redditor got the undies:

I got them off of Wish -- fair warning, if you buy one pair of novelty underwear you'll get hundreds of others showing up in your recommendations for all eternity. -LibertyJorj

Yes, this is the OP's actual picture of their statue:

A very, very ugly dog statue covered in seashells that I bought in Puerto Rico when I visited as a child...the thing's almost menacing. -Notelessfables

Okay, both of these are kinda troubling...

A gallon of industrial grade hydrochloric acid and a Vietnamese propaganda poster. -Jesslopy

Alligator head. My parents bought it for me right after I became vegetarian, I don't know why I kept it. -curious_kitten00

Bags full of just bottle caps. -Maple_Cry Hey, that's a proper currency in the Wasteland; no shame there. Crawl out through the fallout, baby!

Yards can be conversation pieces, too.

A real fire hydrant painted like a dalmatian. White with black dots. Someone asked why it was painted like a cow and I told her they were out of dalmatian paint at Lowes. It's a yard ornament in my front yard. -wrcatfish1

When I was a student, I rented a house in Germany with some strangers. We bonded by exploring the place, which had belonged to the landlord's grandparents who had died about 15 years previously, at a very old age.

...And then it turns out they DO find something pretty horrible.

In addition to the party-room in the cellar with a number of stuffed squirrels and mounted boar heads, and hundreds of miniature schnapps bottles, we found a black and white family photo album in a locked drawer. The last page on the album was a photo of Hitler giving a speech. -prolificity

An anime tittie wrist supporting mousepad, my dad snuck into my house while I was asleep(I work night shift) and left it on my computer desk. -Abecheese

Uh, sure, seems like a normal arts and crafts project.

A resin copy of my dick, home-made with a mold. -Carnahiranelloc

I really shouldn't be surprised that these things exist:

A lot of odd shaped screwdrivers and such, so much that I can't convince my friends that I'm not gay. -turtabey

Ooh, now THESE would be fun to put on the mantle.

I have two swords. One is a civil war saber that has been in the family.

The other is a r/mallninjashit katana that was given to me as a joke gift for the zombie apocalypse. Which is a bit unnecessary because, well, I already have a sword.

Real ivory jewelry. I think it's outlawed in many countries nowadays. -MonaLorraine

My father recently died, after cremation I was offered his knees which he had replaced 10 years ago. So I accepted and they are now in my shop and I am considering what to do with them. -StonedPlatypusToo

Now that is a fancy bathroom.

A framed portrait of Her Majesty The Queen and His Royal Highness The Duke of Edinburgh. Provided freely by the great country of Canada and hung proudly in my bathroom. -yourmomsmomsmomsmoms