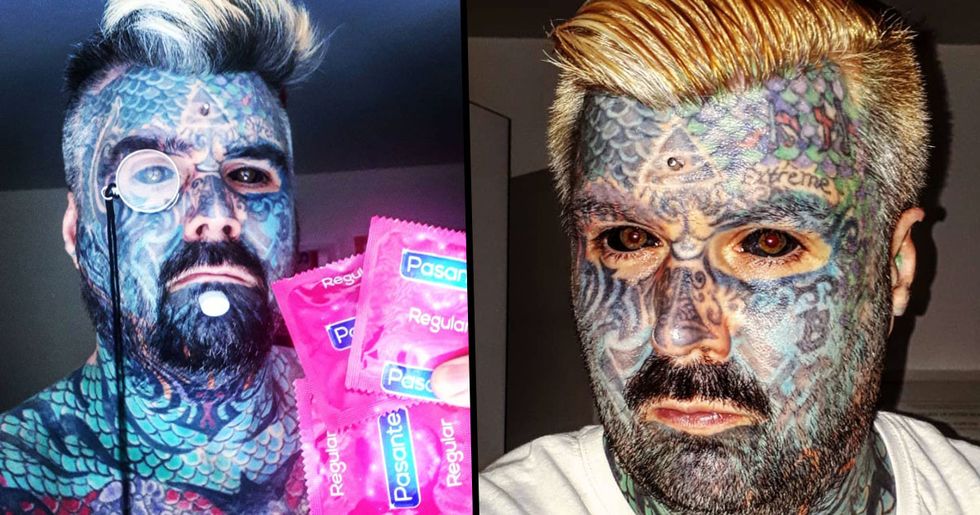 Most Tattooed Man in UK Calls Women 'Shallow' for Rejecting Him

There's nothing that I find more attractive than someone who just can't accept that some people don't fancy them... It's even more attractive when said persons put down those that don't want to bone them; name-calling is the most sophisticated flirting technique that I've ever come across and making me feel bad about myself is a great way to make me reconsider my feelings.

Please, tell me how dumb and unattractive I am, and how I'm punching above my weight by even talking to you...

Of course, I'm being sarcastic. There's really nothing attractive about the arrogant and delusional.

In the news this week, one British man has slammed a sea of woman who passed down the chance to get with him, deeming them "shallow."

Whelan no longer goes by his birth given name and prefers to be called the "King Body Art" and is, according to his Instagram account, a self-proclaimed, "Model & Actor."

Something else you that might have noticed about Whelan...

He has a lot of tattoos.

The Birmingham-born tattoo enthusiast holds two world records for his ink. He is "Britain's Most Tattooed Man," with over 90% of his body covered by ink. In 2014, he also won the world record for having the most people tattoo a person at one time, having twenty-nine people tattooing him at once. This was a record that he later broke himself, when, in 2016, he had thirty-six tattoo artists inking him at once.

As impressive as that might be... he can't seem to get a lady.

Speaking to The Daily Star, Whelan has claimed this week that, "A lot of women are really shallow and only go for guys with Love Island-type bodies. Then I get other women who are just interested in me because of my tattoos."

Not that Whelan has not been popular with the ladies...

So how many is that? Fifteen? Eighteen?

I can count all the relationships that I've had on one hand, so maybe that's why I find it difficult to fathom how someone can't remember the exact number that they've had. Maybe the King of Ink considers everyone that he has slept with as a "relationship" of sorts, or maybe he has suffered from some kind of memory loss.

Or maybe, just maybe, Mr. Whelan is a bit of a freewheeler with the truth.

From his Instagram account, you would think that this guy has plenty of attention from the ladies. Of course, we all know that the way that someone's life appears on the 'gram can be pretty far from their reality. One thing that we can make out for sure is that Whelan would certainly like the world of social media to believe that he is quite the ladies' man.

"Hey, can we get a photo together for my Insta?"

I don't know how many of the ladies that appear on Whelan's Instagram are actually women that he knows, or has even shared more than a short exchange with. Who knows, maybe all of these women are the fifteen to twenty girlfriends that he has supposedly had?

According to Whelan, he has a very active social life...

In his interview with The Daily Star, Whelan states: "I have a very active social life. But I haven’t had much luck finding love."

Maybe Whelan's political views are what keep the ladies at bay...

Not one to keep his political views private, the King of Ink makes his pro-Brexit beliefs clear on his Instagram. For anyone unfamiliar with the current political turmoil that is bracing Britain, the decision passed for the UK to separate from the European Union has caused a lot of mayhem. Basically, most people are unhappy because, although the decision to leave the EU was passed through a democratic vote, prior to voting, the British public were fed countless fake statistics and blatant lies regarding the amount of money that the island spends on the EU. Politicians such as Conservative MP, Boris Johnson, and UKIP Nationalist Party Leader, Nigel Farage, were some of the main pushers for Brexit and were also the figureheads for the lies that the civilians bought.

Guess who Whelan is a big fan of...

As is apparent from his Instagram, Whelan is a big fan of Nigel Farage. He has even posed for a photograph with Farage's mother at a Brexit rally.

Maybe the ladies are put off by Whelan's general views...

A couple of months back, there was controversy in the UK regarding the Jerry Springer-style show, The Jeremy Kyle Show. After appearing on the show, one guest killed himself. He had failed a lie detector test and his partner left him. It is a well-known fact that lie detector tests do not work, and, although the episode has not been aired, audience members claimed that Jeremy Kyle (the host of the show) really laid into the man in question. Following the incident, many other past contestants came forward and expressed the mental health problems that they suffered following their appearances. This was then backed up by people who had worked as runners for the show, who claimed that they were encouraged to rile up contestants and get them drunk in order to make "good TV." The show was then canceled by ITV.

Can you guess who publicly spoke out in favor of the TV show that wrecked so many people's lives?

You guessed it - Mr. Unlucky in Love, Matthew Whelan. Previously a contestant himself, Whelan decided that, since his experience on the show had not been so bad, everyone else who had a different experience must be wrong. Great logic, Whelan.

"The way I look might create an issue for some people."

Speaking to the Daily Star, Whelan considered that: "I’m nearly 40 so I would like to settle down and have a family. But at the same time I understand that the way I look might create an issue for some people."

Anyone else get the feeling that this guy's personality might have something to do with his lack of girlfriend?

After looking into Whelan, browsing through his Instagram, and learning about his views, I'm beginning to sense that it might actually not be the ladies that reject him that are the shallow ones. Perhaps Whelan himself is more shallow than he realizes. Surprise, surprise.

Besides all of the other reasons, you might want to avoid hooking up with Whelan, because he'll post about it online.

If, like me, you value your privacy, perhaps you might want to steer clear of the King of Ink. Taking to Twitter to "prove" that he has had relationships with women, Whelan posted several snaps of himself making out with women. One of the pictures is particularly graphic, showing Whelan having intimate relations with an unnamed lady. I hope that he got the consent of all the women before posting...

Would you like the person that you lost your virginity to go and tell the world about it?

Well, that's exactly what Matthew Whelen did to his first girlfriend. Posting about how their summer romance led to them both having "their first sexual experience." Good to know, I'm sure that "Mel" is ecstatic that you thought to share.

Careful where you put your hands there, Whelan.

Fetishizing lesbians now, are we?

One of Whelan's latest Instagram posts features the inked guy dancing with two ladies. He captions the photo #girlswholikegirls and, in the third of the photo compilation, we see him shoving both of their heads into his crotch. Classy.

I think that I'm just about done with the King of Ink, aren't you?

I feel as though the mystery as to why he is single is no longer one that I will be grappling with. As far as his assertions that women who don't want to be with him romantically are shallow, or that his body modifications and tattoos are the primary reason that he is still single go, well... I'll leave that to you to form opinions on.