The 20 Most Terrifying Cults of All Time | 22 Words 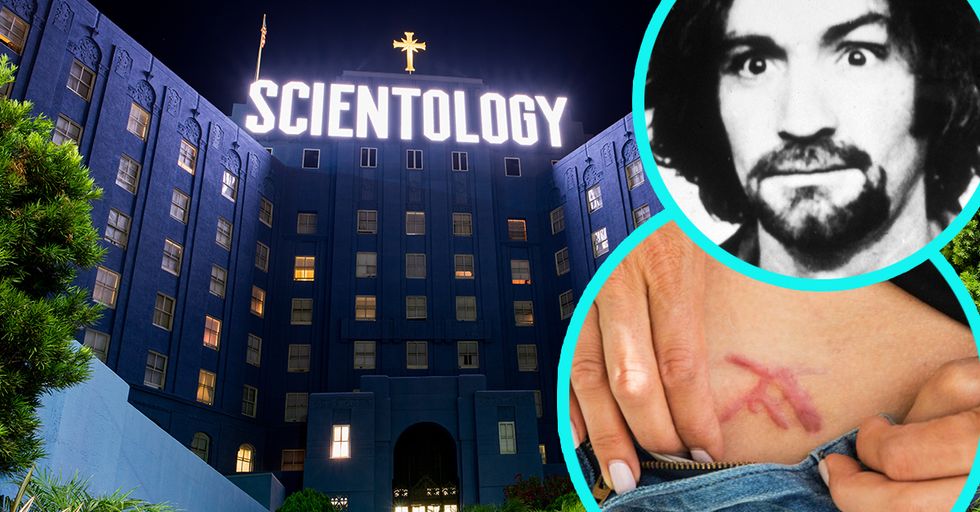 The 20 Most Terrifying Cults of All Time

Some of them have become household names, while others fly under the radar. From murderous to just plain weird, cults have been a subject of fascination to people everywhere who ask, "Who would sign up for this?"

From big to small, here's a list of 20 cults that freak us out.

More than a weird cult that celebrities seem to sign up for in droves, Scientology has become the target of a massive campaign to uncover the truth about their money-grabbing and family-destroying practices – specifically, their practice of encouraging families to “disconnect" from members who leave Scientology. Started by L. Ron Hubbard as an outgrowth of his book Dianetics, Scientology’s bizarre belief system is too complicated and bizarre to comprehend – even by its followers who shell out their life savings in order to achieve the coveted status of “Going Clear." Leah Remini’s A&E series Scientology And The Aftermath is working hard to dispel the myth that Scientology is a “religion," and it’s only a matter of time before the house comes crumbling down. Tom Cruise’s couch jumping days are numbered.

An equally famous but short lived cult run by psychopath Charles Manson, this 1960s group was founded on Manson’s belief that he was a prophet whose mission was to usher his chosen people into the apocalypse. Manson built up a harem of young women, who he demanded sexual favors from, then ordered to murder 8-months pregnant Sharon Tate and four of her friends in Roman Polanski’s home. The gruesome murder shocked the world, and landed Manson in prison for life, where he continued to preach his twisted doctrine until his 2017 death.

In one of the most vile doctrines of any cult leader, Christian minister David Berg normalized pedophilia among his followers, preaching that adult-child sex was not only alright, but actually mandated by God. Actress Rose McGowan has spoken about her family’s negative experiences in the cult widely. The 1970s cult started out as an anti-establishment hippie movement, but quickly veered off into the horrific territory of sexual predation on minors. The cult also forced some female members into prostitution. The group eventually disbanded years later when an epidemic of sexually transmitted diseases infected a large percentage of the community.

Led by David Koresh (born Vernon Howell), the Branch Davidians were a radical offshoot of the Seventh Day Adventists. An apocalyptic cult, the Davidians expected the end times to come, so when ATF agents stormed the compound in 1993 on charges of Koresh stockpiling automatic weapons, the group engaged in a shoot out that left casualities on both sides. The 51-day standoff that followed resulted in a tragic ending: Almost all of the Davidians died in a fire after FBI agents pumped tear gas into the compound, leaving the nation to question how this nightmare could have been avoided.

Another apocalyptic cult, Heaven’s Gate was built on the “end times" prophecy in the Book of Revelations, as interpreted by cult leaders Marshall Applewhite and Bonnie Nettles from the 1970s-1990s. Unlike the Branch Davidians, Heaven’s Gate theorized that a literal spaceship would show up to scoop up all “believers" before the apocalypse happened, thus saving them from the end times. In morbid preparation for this spaceship, 37 members of the cult committed mass suicide in 1997 by wrapping themselves in plastic bags and purple cloths. The ship never came.

The Unification Church: “The Moonies"

Known as “The Moonies," this cult was founded by Rev. Sun Myung Moon in South Korea in the 1970s and known for its mass weddings in which spouses would randomly marry each other to fulfil their “devotion vow" to the group. Moon preached that “salvation can be theirs only through strict obedience to his statutes," which apparently included growing the group as large as possible in order to take everyone’s money and evade taxes.

Jim Jones was a Pentecostal minister who established congregations around the U.S. in the 1970s preaching so-called “progressive views" on racial equality. Jones infamously convinced his 900 followers to commit mass suicide on their compound in South America after they’d shot a U.S. Congressman who’d flown there to meet them. They died by drinking poisoned Flavor-Aid, some allegedly at gun point. No one survived.

Rajneeshpuram was founded in India in the 1970s by an Indian guru named Bhagwan Shree Rajneesh, who liked money and sex. Allegedly owning 93 Rolls Royces at one point, Rajineesh encouraged his followers to embrace “worldly pleasures." After moving to Oregon in the 1980s, Rajineesh engaged in bio-terrorism in an effort to convince the government of his religion’s legitimacy. Along with his sidekick, he poisoned food in restaurants around the town where he lived, leaving over 750 people very sick – and the government shutting him down for good.

A small Satanic cult in the 1970s founded in Fall River, Massachusetts, this group was essentially run by an evil pimp named Carl Drew. He lured young prostitutes into his cult, then forced them to undergo so-called “Satanic rituals." These rituals included sex and drugs, but eventually led to the brutal murder of several teenage girls, who Drew used in human sacrifices. Drew was finally arrested and brought up on charges for his horrific crimes, but not before three bodies were discovered mutilated and raped.

Another Satanic cult in the 1980s, the Ripper Crew was founded in Chicago by four deranged men under the leadership of ringleader, Robin Gecht, who previously worked for notorious serial killer John Wayne Gacy. The cult’s mission was torture and murder, and the group left a trail of bodies in their wake. Between 1982-1883 alone, 4 men and 18 women were abducted, raped, and murdered. This unforgivable foursome was eventually discovered, arrested, and locked up, thanks to a victim who escaped a particularly brutal Satanic ritual.

The Fundamentalist Church Of Jesus Christ of Latter-Day Saints (FLDS) is not to be confused with the mainstream Mormon church, which denounces FLDS practices. These practices include polygamy and, under the brutal leadership of Warren Jeffs, under-age child brides forcibly married off to old men, and pervasive incest. Though not assigned the status of “cult" by all, Jeffs’ isolated group was ruled by fear, intimidation, and abuse, which eventually led to the 2006 FBI raid on Jeff’s compound and his imprisonment. Jeffs still runs the group from prison today, and his followers still listen to his demands.

A nice departure from those doomsday cults, members of the Aetherius Society mostly spend their time thinking about aliens. Yep. Aliens. Their beliefs in Karma and the existence of aliens living among us probably makes for some interesting meetings – and it’s apparently an attractive prospect to many! There are still thousands of members in this long-running cult that was founded way back in 1955. Because aliens are forever.

Speaking of aliens, followers of Raelism dig them too! Mostly known for being weird hippies that worship aliens, Raelians quietly built an enormous following in Asia – upwards of 20,000 members, by 2002. But when the fringe cult starting making claims that they were successfully cloning humans in 2002, the government was like, Um, NO. Lawsuits were brought against the group and members began to dwindle. That hasn’t stopped Raelism from continuing to sell its bogus “embryonic cell fusion device" online for $9k, though. There’s a sucker born every day, after all.

Known as the “Garbage Eaters," the Brethren were also focused on the end of the world. And of course, they were founded in the 1970s as an outgrowth of the Jesus-hippie movement that seemed to spawn so many groups like this. Cult leader Jim Roberts didn’t order his followers to commit any heinous crimes, so there’s that. But he did encourage them to give up their worldly possessions, live as homeless people, avoid bathing, and eat trash to survive. So, yeah. It sucked.

Totally into bathing – and BRANDING – is the much fancier, but far scarier NXIVM cult. Led by charismatic charlatan Keith Raniere, the NXIVM organization markets itself as a NY-based “female empowerment" group that offers professional guidance and seminars. Like Scientology, the cult has targeted celebrities, some of whom are just now speaking out about NXIVM’s strange and brutal practices – which include literally branding Raneire’s initials into the hip of its female members and forcing some of them into sexual slavery and financial ruin.

This 1950s Tennessee cult was started by Gene Springs and his wife Marsha, who eventually renamed their offshoot of Presbyterian Church “Twelve Tribes." Their message grew more bizarre, and their practices more harsh as time went on. What began as a return to “fundamental Christianity" grew into a strict doctrine that forced followers to adhere to stern rules of living, dress, and worship. Allegations of child abuse and rampant racism also rose in the 1990s when more people began leaving the cult. Former members claim to have been so isolated by the group (which continues today), that they didn’t even know how to use simple machines like ATMs or vending machines when they escaped. The group still has sects all around the world today.

Congregation For The Light

This very small (approx 200 members) Manhattan-based cult focuses its attention on crazy racial theories about Aryans and the lost city of Atlantis. Not much is known about the very insular cult, except that they mostly live on the estates of deceased members, accumulate new members by birthing them (no one is joining this mess lately!), and believe that bad karma gives you cancer. Oh – they’re also REALLY obsessed with owls.

Known as the “Snake Handlers," this Southern cult is an offshoot of Evangelical Christianity that focuses on snakes. Yup, real, live snakes. Interpreting a passage in the Bible about demons being associated with snaked, Church Of God members regularly bust out live snakes during meetings to let them crawl all over them while “shouting out the demons" in God’s name. Obviously, many snake bites – and deaths – have resulted. Still, this group perseveres.

Hey – it’s a Midwest cult! Who knew? This 1965 group founded by Paul Twichell, settled in Minneapolis preaching the healing powers of mysticism, meditation, and home-grown symbols. Eckankar Members don’t go around murdering people or stockpiling weapons, which is a relief. But they do claim to be descended from magical “ancient roots" and even speak to one another in a language they invented from scratch.

The Church of Bible Understanding was started in the 1970s by PA native Stewart Traill, the son of a minister who later went on to preach about the “logic and reason" of the New Testament. The group started as “The Forever Family" and later renamed itself the COBU, achieving tax exempt status. With groups forming in PA, NY, and NJ, Traill convinced his followers to work long hours in his carpet cleaning and floor refinishing business at wages as low as $10 week, thus building a monopoly on the industry in Manhattan. COBU members lived communally in houses or lofts in squalor living conditions while Stewart and his wife lived lavishly in large houses. The cult leader amassed a fortune on the backs of his worker-army, ultimately purchasing four planes and a large compound in FL which he lives in today. Stewart ruled by fear, guilt, and sleep deprivation, and allegedly had sex with the young girls he recruited to be his wife’s “helpers" in later years. His followers were also charged with beating his son brutally for breaking a minor rule – at Stewart’s request. COBU is a lesser known, but still active cult that was spoofed on Seinfeld in The Sunshine Carpet Cleaners episode in the 1990s.