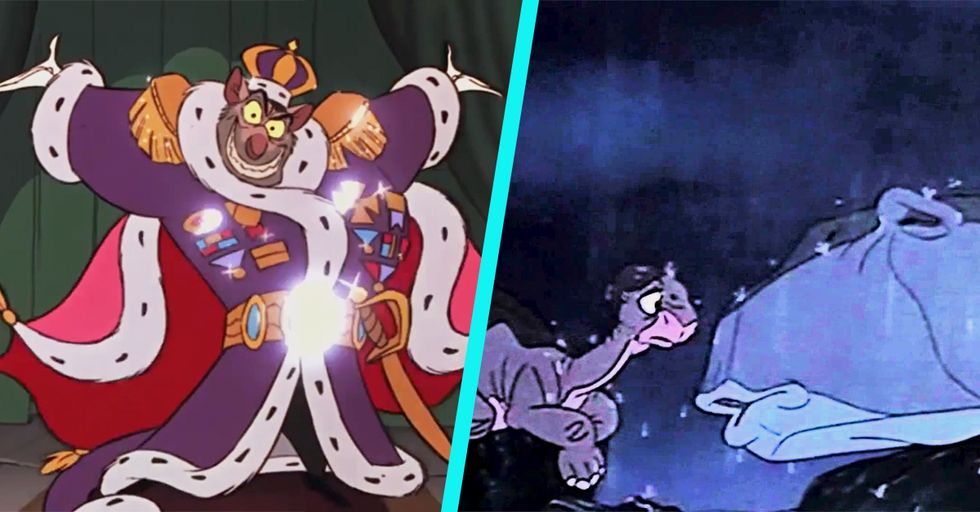 Many sweet childhood memories often come from the movies we loved and cherished. Talking animals, flying cars, violent stampedes that murder the father of a poor, little lion; just the average animated movie back in the day. When we look at some of our favorite movies when we were kids, it's sometimes so disturbing what we find, and why we weren't so shocked by these traumatic moments.

Old and new, some of these childhood films definitely have some disturbing scenes that still, to this day, have left some emotional scars.

Is this not the first movie that came to your mind when I said traumatizing childhood movies? You literally hear gun shots in the background then watch little Bambi cry out, "Mother!" while shivering in the snow. What a dreary, sad, heartbreaking scene for a kids movie!

You know exactly what scene I'm talking about. This is the definition of traumatizing. We just watched a violent murder, then on top of that, Simba had to watch it all go down. If this is the circle of life, I don't know how much I want to be a part of it.

This was an 80's classic filled with a truly traumatizing scene of a horse being drowned in a "sea of sadness." We watch as he slowly descends to his death, even though Atreyu, the truest of friends that a boy could ever be to a horse, is screaming and fighting to save him from his sinking death. Yeah. Major trauma.

Classic film, yes, but they found a worm-looking alien in a corn field and then tried to dress him up as a human? I feel like any normal kid would run from something like this. I know I would.

Do you remember Judge Doom? He was the crazy villain in this movie that literally would melt the Looney Toon characters in a pot of boiling goop. We were watching a scary bald man burn his victims alive. He ends up getting crushed by a giant rolling pin, then also burned alive. Graphic, creepy, and downright traumatizing.

Don't Look Under The Bed

This was a Disney Channel movie that still, to this day, makes me not want to look under my bed. There's a scene where a girl dives into a pool of blood and the school gets infested with flies; it's almost like the plague. The boogeyman in this movie is sure enough to give you nightmares as a child, and maybe even as an adult.

Speaking of monsters. Come on. This movie is all-around weird, but the scene where the blue monster, Maurice, rises from the ground with his pointy teeth, then his eyeballs pop out of his head. Oh, and then he grows horns. Just when I thought it couldn't get any more traumatizing, I found out that it was Howie Mandel who played that creepy monster. I'll never be okay.

Willy Wonka and the Chocolate Factory

This whole acid-trip of a movie really freaked me out as a child. It sounds all dandy at first, this beautiful chocolate factory and candy for all the children. Then kids start blowing up and drowning in chocolate lakes. The most disturbing scene, as we all know it, is the tunnel scene, where Willy Wonka and his oompa loompa army, row into a chaotic, creepy spiral of weirdness, all while whacky Mr. Wonka sings ever-so-calmly.

The Fox & the Hound

Retweet. This is one of the saddest scenes in animated history in my opinion. Watching poor Tod get left behind...I just don't think I'll ever be able to comprehend that kind of pain.

This was just the first scene in the movie. Que kids being afraid even more afraid to go swimming. Sharks are a pretty common fear, but now kids have to be afraid of the barracudas that ate Nemo's mom and made Marlin a single father.

Another traumatic death, this time it's not animated. Again, Disney...you're really breaking hearts out here. There's no way to hold back tears when you watch all these dogs lay next to their dead best friend who is now covered in snow. As a child, this really has to be so hard to watch, especially since it's not cartoon dogs and the expression on these animals look so believable.

This scene is a short one that many have forgotten, but the traumatized few will know what I'm talking about. It starts out all cute with bubbles and pink elephants, then, before you know it, sh*t just hits the fan. There are elephant snakes, skeletons of elephants, pyramids (illuminati elephants?) and the intense music and crazy colors just add to the insanity of it. Poor Dumbo, it honestly must have felt like he was tripping out because that's what it feels like to anyone watching this scene.

The Adventures of Mark Twain

This. Is. The. Most. Traumatizing. Scene. Ever. Watch it for yourself. It just keeps getting worse.

I'm talking about the original, not the Kevin Hart and Dwayne Johnson version. This movie scarred me growing up, thinking that something I loved so much, something as innocent as board games, could turn you into a monkey and make alligators appear in your living room. The most traumatizing scene to me was when Robin Williams starts to sink into the floorboards, then all these giant spiders appear. My living nightmare.

This scene is so random and out of the ordinary that it leaves you feeling uneasy in the midst of a really joyful and silly movie. Why was this scene even necessary? I don't know, but Large Marge is one crazy truck driver, that's for sure.

WTF. This movie is the worst thing ever to be created. There isn't just one scene in it that is traumatizing, it's basically the whole movie. So much death. So many disturbing scenes. All these poor, cartoon bunnies getting slaughtered. Just do yourself a favor and never watch this movie.

The Land Before Time

No one wants to watch a baby dinosaur witness their parents brutal death by a vicious T-Rex. This scene left me sad for quite some time. RIP Littlefoot's mom.

James and the Giant Peach

A lot of this movie was questionable, but the weirdest scene was when James' parents got eaten or swallowed or inhaled by that giant rhino in the clouds. This scene felt like a weird, fever dream as a child. Still gives me goosebumps just thinking about it.

This is a terribly cute movie, with quite a sad beginning. The scene where the bat breaks into the window and kidnaps the father mouse is just shocking and disturbing. Mice deserve happy families, too.