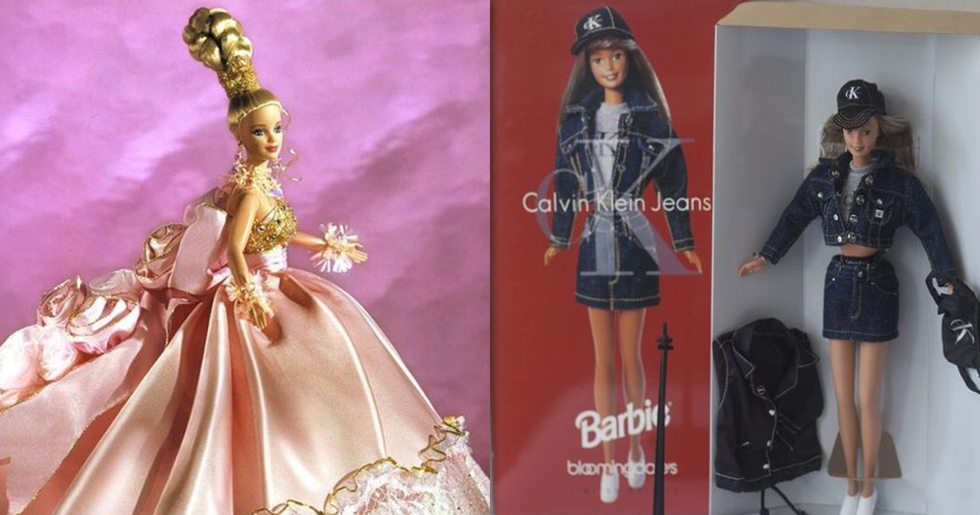 You've most likely owned a Barbie at one point in your life. That, or your sister had a Barbie, your cousin had a Barbie, and maybe your brother secretly wanted one too–but was embarrassed to tell anyone. Or maybe, if he was cool, he went ahead and had one anyway. Barbies are one of the most ubiquitous toys of the last 60 years, and even if you didn't have Barbies of your own, chances are you played with them at some point in your childhood.

I know I did. I wasn't much of a doll person, but even I could say no to all those tiny accessories. I had a Barbie pool that you could fill with real water, and when Barbie went in her hair changed colors– let me tell you, that was the coolest thing I've ever owned. Sadly, Barbie's long, color changing locks were chopped off at some point by a sibling of mine who will remain nameless (you know who you are).

Barbies were invented in 1958, and since then Mattel has sold over one billion of them in more than 150 countries. To say that Barbies are popular is an understatement. But did you know they are also valuable? Although the Barbies your parents have stuffed away in a box in their attic are probably not collector's items– and let's face it, you most likely ruined their hair and lost all their shoes, but it's possible that you may have a Barbie that's worth thousands of dollars.

You can't beat the original, and if you have an Original Barbie, you're in luck.

The first Barbie was invented in 1959 and was named after the inventor's daughter. The original Barbie was supposed to be a teenage fashion model and she had legs that could bend and eyes that could open and close.

Barbie cost $3 when she was first sold in stores.

The Pink Splendor Barbie is the most expensive Barbie ever made.

The Pink Splendor Barbie was released in 1996 and was priced at a whopping $900. Yeah, $900 for a doll that if you ever touched or took out of the package was suddenly worth half that. This Barbie came dressed in a long silk ball gown, silk underwear, a towering hairdo, and her whole look was studded with rhinestones.

There were only 10,000 Pink Splendors ever made and each one came it it's own serial number.

Today, you can get one on Ebay from $250-$500. Her worth has dropped over the years, but she still holds the honor of being the most expensive Barbie ever sold in stores.

The most valuable Barbie in history is the Stefano Canturi Barbie.

Australian jewelry designer Stefano Canturi spent 6 months designing this one of a kind Barbie who wears a real diamond necklace worth $300,000. That doll is wearing a tiny necklace that's worth more than a house.

The designer, who also designed Satine's diamond necklace in Moulin Rouge, insisted that the proceeds from his Barbie go to The Breast Cancer Research Foundation.

The doll, who wears a silvery and pink gown, was given out in 1989 to attendees of Barbie's 30th anniversary celebration.

Because only 1,200 dolls were made, getting one is tough.

The Carol Spencer Holiday Barbie is worth $1000.

Carol Spencer was a Barbie designer who started working for Mattel in the 1960s. She designed Barbies for over 30 years. This particular Barbie, with red sequins and very puffy sleeves, is hard to track down.

She comes with a backpack and, of course, a windbreaker.

It's also maybe the most American toy to ever exist? In addition to being NASCAR, this Barbie is sponsored by McDonalds.

American Girl Barbie was released in 1965.

Mattel officially named this Barbie "Bendable Leg Barbie", but apparently that didn't really catch on because collectors have changed her name to American Girl Barbie.

She came in a variety of hair colors and two different make up styles.

Barbie as Medusa was released in 2008.

This Barbie looks cool as can be. The Mattel website lists Medusa Barbie "for the adult collector" and yeah that's right, no grubby kid hands are going to mess up this awesome snake-headed queen.

There were only 6,500 of these Barbies made.

The Summer Daydreams Barbie is from the Coca-Cola Fashion Classic Series.

This Barbie, released in 1997, is fashioned after a turn of the century ad for Coke.

She comes with a parasol and a teeny tiny Coke bottle.

This sophisticated Barbie is worth up to $3,000.

She was released as a part of the Barbie Fashion Model Collection, and her clothes only fit her body, not other Barbies. So fancy.

The Christie doll was the first black Barbie.

Christie first appeared in 1968 as a talking doll and a friend to Barbie. Her box read, "You never know what she'll say next!" Now, that is terrifying1

An original talking Christie doll now sells for anywhere from $100-$900.

They are more valuable if their hair is still black and hasn't turned red, as many Christies' hair have oxidized giving them red highlights.

Ken was first introduced in 1961, two years after Barbie. According to Mattel lore, they met at a teenage fashion show. The pair was together until 2004 when they famously split due to Ken's reluctance to get married after 40 years of casual dating. But the two got back together in 2011. (Ugh, Barbie you can do better!)

Not as much as a Barbie, though. Girl, you're literally worth more than him! Get out of that relationship.

I don't think this Animal Loving Ken from 1988 is worth very much, but I still wanted you to see it.

I have so many questions. Mainly, was the sexual innuendo on purpose?

Chataine Barbie comes with her own fur shawl.

Marie Antoinette Barbie is valued at a whopping $2,000.

Seems fitting for a Barbie that depicts the queen who was notoriously obsessed with wealth.

Marie Antoinette Barbie came out in 2002.

She's even wearing pantaloons! And her head pops right off.

This Barbie is only worth $250 but it's my personal favorite: The Birds Barbie.

Afflicted by a murder of crows, The Birds Barbie is a real Barbie honoring the Alfred Hitchcock film. Barbie has never looked more terrified.