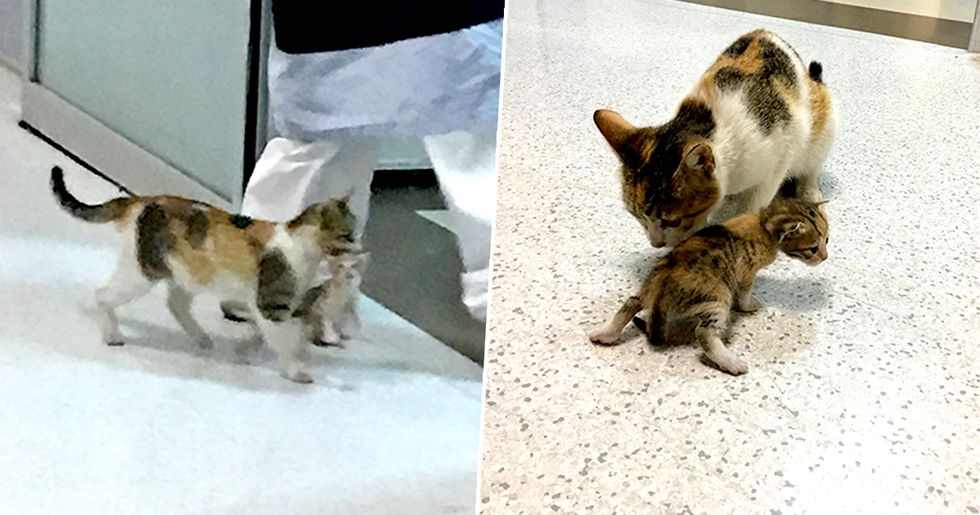 Coronavirus dominates every thought, every hour, every headline - especially when one things of hospitals, doctors, and nurses. But there are other stories out there - and this is just one of them.

Keep scrolling to learn more about this heartwarming tale.

That there are millions of other stories out there that have nothing to do with COVID-19.

This is the massively uplifting story of a mother cat who refused to let her kitten down.

The cat brought her kitten to the hospital

And amazingly a team of medics rushed out to help!

And began petting her and her kitten to try and find out what was wrong.

It took place in Turkey.

And thankfully, the Turkish people are well known for their love and respect for stray animals.

The photos were shared online.

And immediately they went super viral.

Today we were in the emergency room of the hospital when a cat rushed to bring her offspring in her mouth.

They cared for the kitten.

But the mommy cat wouldn't let her out of sight and followed her everywhere the doctors took her.

The mother was given milk and food.

Which certainly helped her relax as the medics started work.

Then the doctors sent them to a vet.

After checking them both over, doctors at the Turkish hospital sent the duo to a vet.

Both of them seemed okay.

But the doctors wanted to make sure.

But the story gets even better.

According to one Reddit user, the doctor who sent them away to the vet ended up adopting the mother and kitten!

This happened in my hometown with a birthing cat. She had problems and walked up to the hospital and started to meow. They helped her and she is now the pet of the doctor who called the vet.

According to figures from Johns Hopkins University more than a million people worldwide, have now recovered from COVID-19.