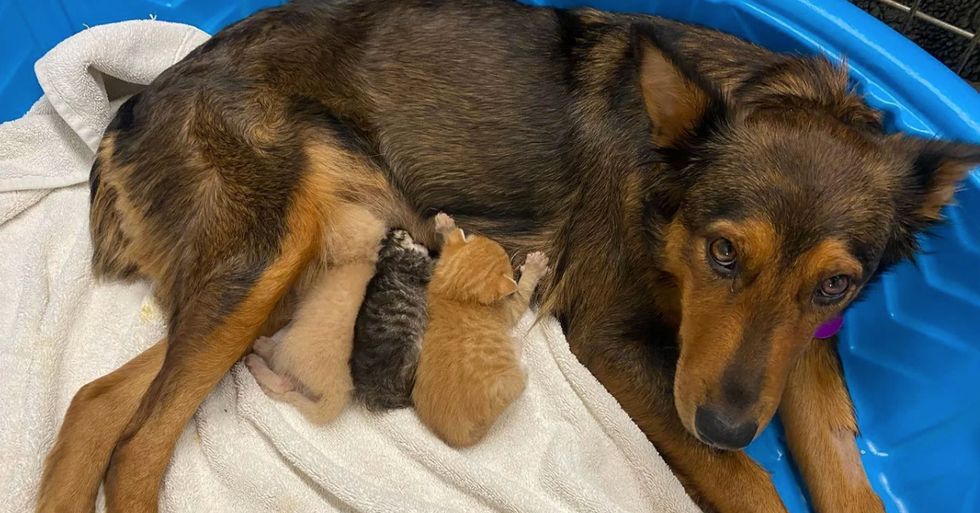 A poor mother dog, who lost her puppies in premature labor, has adopted a litter of orphaned kittens in a heartwarming twist of events.

Who says dogs and cats can't be friends?

We all know the assumption that dogs hate cats...

But how true really is this?

Dogs and cats can be the best of friends... when they want to be, of course!

Cartoons are responsible for this assumption...

And people who own both cats and dogs can totally agree that it is total and utter nonsense that dogs and cats hate each other.

So as long as they're raised together...

Or gently introduced to one another, dogs and cats will live in harmony with each other.

And the heartwarming story of Georgia the dog has proven the amazing bond between our favorite pets.

And she was recently taken into care by The Sunshine Dog Rescue in Phoenix, Arizona.

The Australian Shephard was pregnant when she was taken in...

But when she went into premature labor, she sadly lost her 3 puppies.

It was a terribly sad situation.

"Going into premature labor gave her babies no chance of living outside of her womb. While my heart hurts for the puppies that never got to run and play, my heart is so very sad for Georgia. She is looking for her babies and it is heartbreaking to watch," the rescue wrote in a Facebook post on August 13th.

Poor Georgia was in a terrible state following the loss of her puppies...

And the staff at the rescue shelter noticed her pining and searching for her babies. Utterly heartbreaking.

Caregivers eventually gave the grieving canine a stuffed animal with an artificial heartbeat to simulate her babies and calm her down.

But it simply wasn't enough.

However, a few days following Georgia's loss, a special delivery arrived at the shelter.

Even though Sunshine specializes in dogs, the shelter took in an abandoned litter of 3 motherless kittens.

Workers at the shelter decided to try and introduce Georgia to the kittens...

And just as they'd hoped, the grieving dog took to them straight away.

Of course, there were doubts.

Anita Osa, executive director of Sunshine, told KXTV that she was "certainly unsure" about Georgia taking in the cats as her own but ended up being pleasantly surprised.

Georgia immediately took on the role of their doting mother.

"She LOVES them. So far we have been able to get one to latch and are bottle feeding until the other 2 figure it out too," the rescue wrote on August 15th.

Even though one of the kittens sadly passed away a few days later...

The other 2 kittens were "thriving" and were bonding strongly with their new mom.

The kittens were eventually given names - Graffiti and Gumball.

Another kitten was also added to the little family, a ginger tabby named Goober.

The 3 little kittens are now doing great thanks to Georgia's love and care.

"They have all opened their eyes, are gaining weight (now weigh 7-8 ounces each), and seem very content with mama," read an August 20th update.

Just look at them now!

Georgia is soon set to go to her new adoptive home...

And even though her goodbye may be difficult, she and the kittens will now be able to live long and happy lives... all thanks to each other.

Keep on scrolling to read about the stray cat who carried her sick kitten to the local hospital to try and get help...