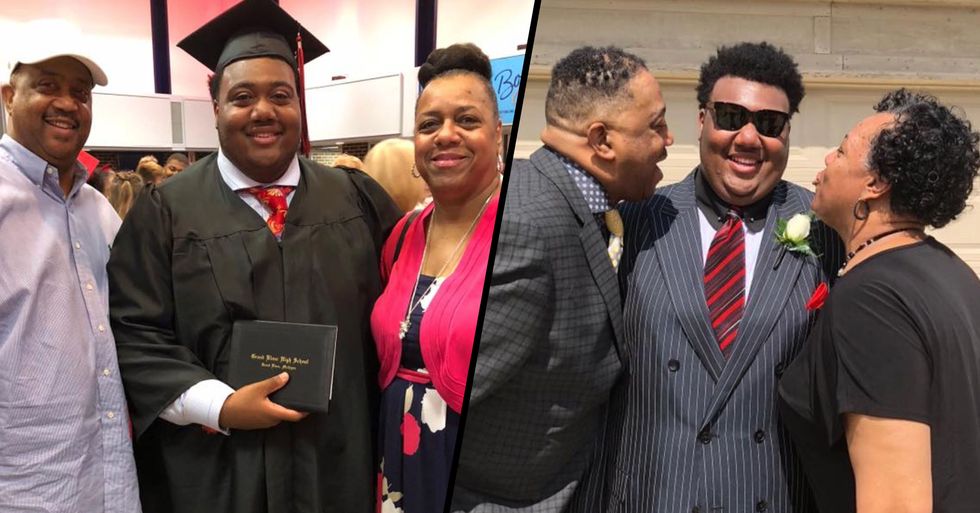 Sandy Brown, a mother from Michigan, experienced one of the most difficult heartbreaks over the weekend as she had to bury both her husband, and her son, after they had both come into contact with the virus that unfortunately took their lives.

The story is heartbreaking, but Sandy wanted to honor her family members by allowing their stories to be heard.

Sandy Brown was a mother and a wife.

The sixty-year-old from Detroit, Michigan, had been married happily to her husband Freddie Lee Brown Jr. for thirty-five years.

After experiencing the pain of multiple miscarriages, she was blessed with a son.

Sandy's only son, Freddie Lee Brown III, was born when she was forty years old, after years of trying to conceive.

And the couple referred to him as their "miracle child."

Freddie III was only twenty years old when he contracted the virus that subsequently took his life.

Her husband was fifty-nine years old.

He was the first to contract the disease and after fighting for his life in the ICU, his body could not find the strength to recover from the pain.

His symptoms were typical of the virus.

Sandy's husband started to feel unwell around the middle of March when he was waking up sweating through the sheets every morning.

He then started experiencing nausea and fatigue.

Unable to eat, drink or sleep, he was rushed to Ascension Genesys Hospital in Grand Blanc Township. He had previous underlying issues as he had undergone a kidney transplant back in 2012.

And only days after his hospitalization, her son was the next to seek medical help.

And just as quickly as his father, he was taken into the ICU, where he underwent extreme professional aid.

And even though, initially he was showing signs of improvement...

He Facetimed his mom to update her on his health and as you can see, he was smiling and telling her he was feeling a lot better. Sandy even sang lullabies from his childhood for him so he was more comfortable being there on his own.

However, things took a turn for the worst only a day later.

Freddie died the very next day after the video call with his mom. It seems as though the second wave of the virus hit him harder than expected and his immune system could not combat it.

His father had died just three days before him.

This meant that Sandy was left all alone. The virus had taken all of the members of her family.

She described her pain, saying it was "unimaginable."

"There's not even a word created to describe my pain. It's unimaginable."

The pain of losing one family member is enough, but two? Life is cruel.

What made the entire ordeal worse was the fact that she couldn't even be with them in their final moments due to the strict restrictions about contact with patients that had fallen ill due to the infection.

She wasn't even able to say goodbye.

And even now, she is not allowed to be comforted by her friends and family because of the rules, but they are providing some support to her virtually throughout the most difficult time in her life.

"You feel helpless. You can't go to the house and tell them it's going to be all right." It truly is heartbreaking.

Freddie dreamed of being a football player.

He was a student at Mott Community College and had plans to become a member of the football team at Michigan State University. Those dreams were shattered by the pandemic.

Both of their funerals took place over the weekend.

The viewing was private, though it was broadcasted over Facebook Live. It showed Sandy walking up to her deceased loved ones in order to say her final goodbye before they were laid to rest.

Even though medical professionals warned against seeing their bodies, Sandy persisted.

The staff in the building made sure she was dressed in protective clothing.

She was dressed in a gown, mask, gloves, and glasses before she entered the room. She was also granted permission to be able to touch their faces. Only twenty-five others were allowed to attend the actual burial.

Sandy recalled her feelings during the difficult time:

"In three days, I lost my husband and son to an ugly plague," she said. "I watched my son go from completely well and whole and happy to being gone in three days. Medical science says I should be traumatized. I had a traumatic experience twice. I should be banging my head against the wall..."

"I'm standing here in the strength of the Lord, not strength of my own. God has got me." This story is truly heartbreaking and shows us that this virus is still at large. No matter your age or occupation, it does not discriminate. Please stay safe. RIP Freddie Lee Brown Jr and Freddie Lee Brown III. Our hearts ache for you.