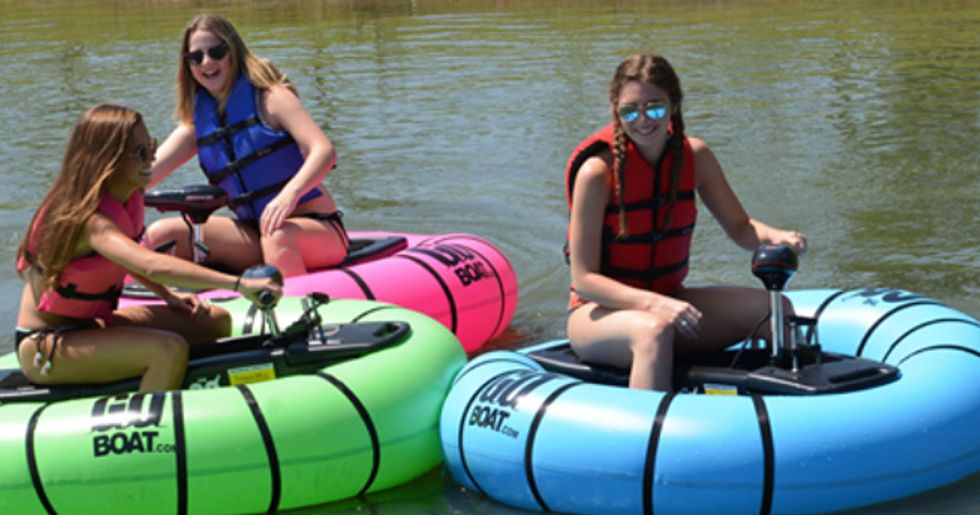 You heard it here, people... Some clever head somewhere has only gone and invented a motorized inflatable.

I mean, we were already aware that the beach inflatable game had been going from strength to strength but little did we know this summer we would be entering a new age.

Far gone are the days of the modest lilo, long forgotten is the simple inflatable rubber ring.

Even before this motorizing development, we had already raised our inflatable standards much higher than they'd ever been before. Frankly in 2019, if it doesn't resemble something: say a fruit, spaceship, political figure, dessert, then we just aren't interested.

Who knows, maybe by next year, if it can't spin us in a complete 360 from a control pad on the front we won't have any interest in it at all.

Lord knows we truly are spoilt.

Ah, the pizza float, a circular inflatable that you could fit both Rose and Jack respectively... This is a float that wouldn't be out of place on a gal pal holidays, a bachelor party or really anyone's family vacation - we are a country of pizza lovers; so wherever we're holidaying, floating around on a giant inflatable pizza suits just fine.

Or for those ditching the carbs...

Maybe if you've decided to cut the carbs this summer a pizza-shaped inflatable might be that tempting reminder you just don't need. Alternatively, another popular circular sharing float is the watermelon shaped float. This is ideal for anyone who likes watermelon, wants a bit of room on their float (I'd sack off the mate and star-fish the frick out of this bad boy,) and is sick of the restrictive nature of the original rectangular lilo design.

Let me remind you what we were once up against...

Your body ridged, unyielding... unable to move the slightest muscle in fear that it might upset the delicate balance of the classic rectangle lilo. Your body just about fits on, lord knows how long it took you to get on to the stupid thing in the first place. You try and relax, you even close your eyes for a moment- but what's that? Suddenly you're sinking! For some reason unknown to you, water has invaded the top of the lilo causing it to sink.

In 2019 we make floats with room to breathe.

No more squeezing yourself on to a poorly inflated inflatable... we live in an age of spacious and serious water inflatables.

Probably Instagram. Since the dawn of snapping everything, everywhere we seemed to have invented much more photo-friendly floats, don't you think?

We have learnt that different colours can affect our mood. Why not enhance your mood with a floating chair that can change colour depending on what you desire? Go on then, may aswell.

A lilo for people with mates.

The Modular Sun Floating Daybed offers you the option of lounging in a circle or alternatively in a line. Don't ask me the science, is it velcro, is it magic; I have no idea! What I do know is that this vintage-inspired design looks pretty darn cool.

The Bali Cabana Lounger, also from Floodgate.com not only provides the back support absent from the classic lilo design but it also provides ample room for two to lounge in harmony. I am so down for this inflatable lounger.

The classic lilo design on steroids.

The old-fashioned inflatable lilo design consists of a flimsy structure and no back support this design from Frontgate.com destroys all these stereotypes. Delivering an inflatable that has a strong structural design, with more than enough back support. You could easily breeze through the afternoon reading a book without fear of toppling into the water or getting a sore arm from holding said book above your head so you can read the pages.

A pool within a pool you say?

This inflatable looks like it came straight off a kids game show. With enough space for the whole, well some, of the family, these inflatable even has a pool within its structure! You can take this bad boy to the next vacation and never have to canoodle with any randos in the hotel pool! Or take it to the beach and create your own mini-island out on the sea!

I did mention political inflatables ...

Whilst a giant Trump float may well have hung over the London skyline in recent years, you can purchase your very own novelty Trump inflatable ring on Amazon. Forget about the grim political reality of right now and rest your tired head on the back of our grumpy ol' President.

Getting married? There's an inflatable float for that.

Celebrate- or show off your recent engagement by getting one of these diamonds for the beach... "You just got engaged?" "How did you guess?!"

Now, this avocado float has been really popular this summer. The design is pretty clever, not only does it serve as an inflatable ring type contraption for you to lounge away those long summer days, but the "seed" of the avocado can also be removed to function as a beach ball. Nifty, right?

No- it's a dinosaur inflatable. A really life-like one at that. Kids these days get it all... When I was growing up we were lucky to get a hollowed-out log to float on.

A float that provides shade.

What a great idea! This flamingo float, available on Amazon, will not only provide ample room to stretch out on but this nifty float will also keep you protected from that pesky UV fiend. Whilst, of course, providing many an opportunity to get a killer Instagram photo...

Rubber ducks are no longer a luxury reserved for bath time...

That's right, even rubber ducks are in a new league nowadays! These giant inflatable rubber ducks are sturdy, give you loads of room to chill out (can probably fit about three people on one of these) and also look pretty darn cool too.

But now the inflatable to put all other inflatables to shame...

Introducing the one, the only... The Goboat.

It's time to get going with a Go Boat.

This is a personal, portable watercraft. This invention allows you to cruise along the water, navigating using the easy to understand joy-stick style control. With an easy setup and a lightweight design, you can literally take these babies anywhere. And they come in a bunch of colors! Pretty neat, eh?

Forget the restrictive nature of the fairground bumper car, with the Go Boat the entire ocean can be your stadium. Invented by a guy called Dave who was passionate about bringing bumper cars out on to the water, it took four years of prototypes to get it right but he finally achieved the previously unthinkable. Depending on which color you go for the price of a Go Boat ranges from $299.00 – $314.00. A price I think is very reasonable for a device of this caliber.

The Go Boat isn't just for bumping into each other...

The Go Boat is essentially a mini-boat. Ideal for fishing if you're into that kind of thing. The edge the Go Boat has on an actual motorboat is that with these nifty things you don't have to think about the hassle of boat landings. You can launch right in from the shore, dock, beach or even a bigger boat! Looking for something to do with the kids this summer? The Go Boat is the most exciting summer gadget to hit the market.