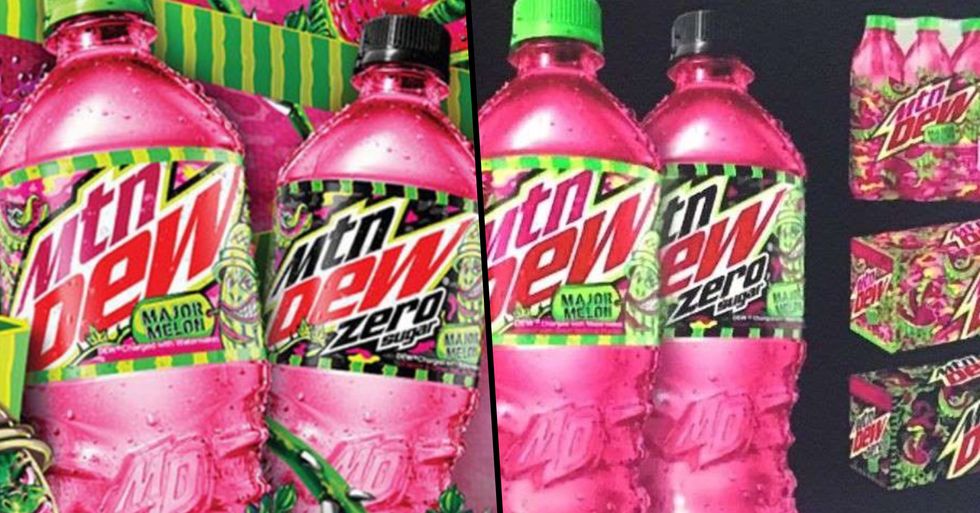 Mountain Dew Is Releasing a Watermelon Flavor and It's Bright Pink

Mountain Dew fanatics rejoice! There's a new flavor in town, and people are saying it's the best yet...

As we cling onto the last remains of summer...

Mountain Dew has come through with a last-minute summer-inspired flavor.

It's taken the internet by storm.

Not to mention the bottle might be the prettiest Mountain Dew beverage on the market.

What more could you want?

Mountain Dew has long been a popualr choice for those wanting an energizing beverage.

Let's be honest, Mountain Dew built the foundations of our society so that Kyles all around the world can thrive.

There's an array of flavors of the beloved fizzy drink out there.

The original formula was invented all the way back in 1940 by Tennessee beverage bottlers Barney and Ally Hartman.

A revised formula was then created by Bill Bridgforth in 1958.

The flavor most of us all know is the original citrus...

But the brand is constantly expanding its range to include the likes of "white-out," "mango lime," and "black cherry," just to name a few.

But now, there's reportedly a new flavor on the horizon...

And it's going to be the best yet.

Details of the new flavor were leaked on Reddit by user boogie429.

According to the leaked materials, the new Mountain Dew soda tastes like watermelon.

Also know as “Major Melon," there will be a zero sugar flavor option for those wanting to be a bit healthier.

And the soda will also come in can size too.

But that's not even the best part...

There's no limited edition business going on here as the flavor is reportedly going to be permanent!

After seeing the packaging in its full glory...

Reactions came in strong, to say the least.

Fans are suitably ecstatic for the release.

And many had been secretly wishing for watermelon to be added to the flavor catalog.

The general consensus was good.

Look at that packaging!

We're living for the pink.

The drink is supposedly launching January of next year...

So, it will be perfect for curing all those winter blues. In the meantime, scroll on to check out Mountain Dew flavored Doritos (yes, they really do exist)...