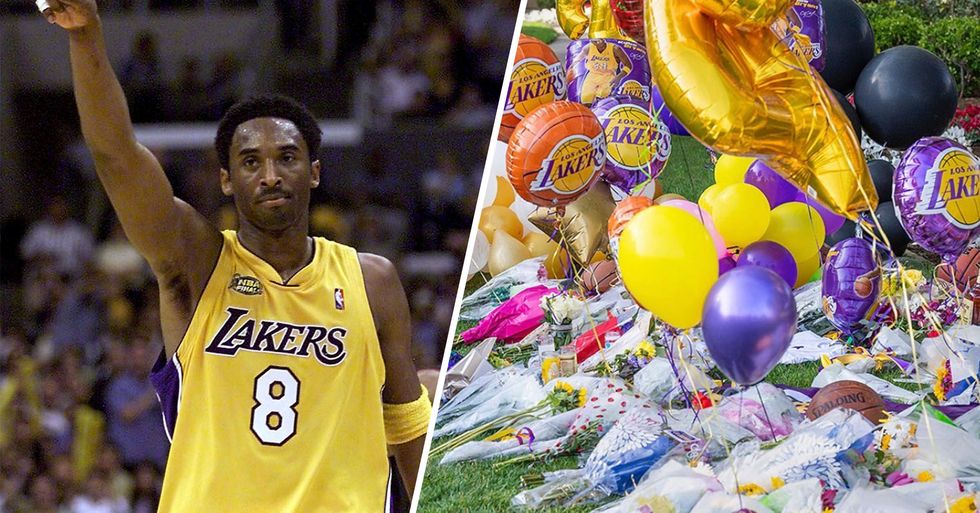 The world was left shocked and heartbroken by the news of a tragic helicopter crash which claimed the lives of legendary basketball star, Kobe Bryant, his thirteen-year-old daughter, Gianna, and 7 others on Sunday morning.

Fans have been paying tribute to the late star in a number of ways. Now, mourners have set up a memorial at Kobe's own home.

It's a truly heartwrenching sight. Keep scrolling to take a look.

Our hearts were left broken by the news that the legendary Kobe Bryant had died.

Kobe was a true basketball star.

Kobe's daughter, Gianna, was also on board the helicopter at the time of the crash.

TMZ Sports reports that Gianna, aged 13, tragically died in the crash. It is thought that the father and daughter were on their way to the Mamba Academy for basketball practice, nearby Thousand Oaks.

As of yet, there's still not much known, but it is believed that the weather conditions may have been a factor.

Shortly after the news broke, several fans flocked to the streets where memorials for the late-star began appearing.

And of course, many rushed to the STAPLES Center, home of the LA Lakers, to pay their respects.

But it seems police were less than happy.

On Sunday night, the Grammys were taking place at the venue, with police urging fans not to visit the stadium to avoid disruption to the awards ceremony.

Police had cornered off the venue in preparation for the celebrities arriving at the ceremony, which began at 5 pm local time.

We’re aware of published reports regarding the helicopter crash in Calabasas today & we’re still in the process of… https://t.co/6RKC3AoZZx
— LAPD HQ (@LAPD HQ)1580071682.0

But it seems that heartbroken fans weren't having any of it and visited the stadium despite being warned not to.

In fact, many fans were outraged that the Grammys went ahead in the first place.

"Cancel the Grammys and start passing out candles for the 7-day long candlelight vigil that needs to happen. Nobody cares about who wins which award right now," wrote one user.

LA Lakers player, Quinn Cook, was amongst those who attended the vigil.

Understandably, he looked devastated by the shocking news. "I didn’t even realize this was Quinn cook until after I took the picture. Quinn has been a die-hard laker fan since he was a kid too. #RIPMamba," wrote the user who posted the picture.

Tributes to the late star have emerged everywhere.

A mural dedicated to Kobe and Gianna appeared in Los Angeles, painted less than twenty-four hours after their deaths, for example.

And that's not the only one...

All the way over in the Philippines, this handpainted mural surfaced just hours after the crash was announced.

But arguably the most emotional memorial took place at Kobe's own family home.

After the news broke, mourning fans flocked to the star's home in the gated community in Newport Coast.

Many fans lay purple and gold flowers in his memory - the signature colors of the Lakers.

At the memorial, many fans were unable to hold back their tears.

The world is still in shock from this tragic loss.

R.I.P. to all the victims of this tragic accident. For more on the heartwrenching aftermath of this tragedy and to see how people are mourning, keep scrolling.