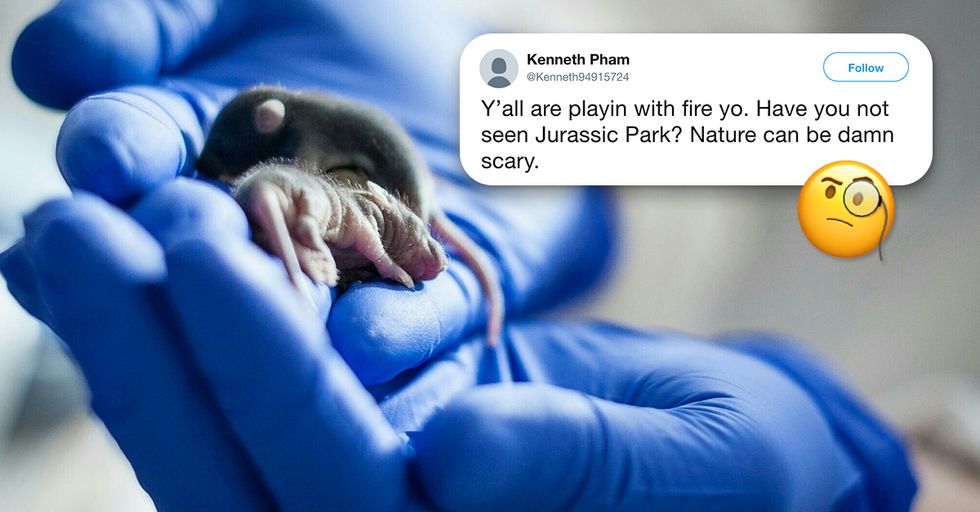 The rules of reproduction have changed, and they'll blow your mind. What you learned in your high school biology class can be tossed out of the window after this groundbreaking discovery. Scientists in China just proved that while it does still take two to tango, one of those does not need to be a male.

Using sheer female power and some scientific assistance, two female mice have produced healthy mouse pups. Scientists around the world are pretty amazed at this accomplishment and are excited about the possible positive implications this may have.

How did this happen? What's wrong with male mice? What does this mean for me? I know, you have a lot of questions. Get out your lab coats because we are about to hit the science books and school you some amazing new scientific breakthrough.

Also, girl power, am I right?

Yes, scientists have finally proved that women might be the dominant species. Well, for mice anyway.

It's about to get interesting up in here.

Mammals are curious creatures, but for the scientists at the Chinese Academy of Sciences, studying mammal's reproduction habits proved to be far more curious.

These amazing scientists have now figured out they can create healthy offspring by using DNA samples from two female mice, no males needed.

This is a big deal!

They published their findings in a journal called Cell Stem Cell, and it was a pretty significant moment in the science world. Go science!

Female mice proved that the rules of reproduction are different now. Who would've thought that such a significant scientific result would come from mice?

The scientists first tried using two male mice to create offspring by only using male DNA. It was a success at first, but the offspring only survived a few days and showed some abnormalities.

Who run the world?

When the procedure was completed using female mice, they were able to create 29 healthy offspring as a result. These female mice have some pretty amazing genes. Who's the weaker sex, now?

It was so much of a success that even the new offspring were able to reproduce as well.

But, not everything turned out perfectly.

There were some hiccups in this successful experiment. There were 210 embryos used, and only a very small portion of them developed into pups (little mice).

This wasn't their first try.

The scientists have tested this before, but a lot of the pups showed some serious abnormalities, which caused concern. Though, nothing can stop science!

Scientists are still figuring out how to create bi-paternal mouse pups (born of two dads), though it may cause a few more complications than using two female mice. Is science saying men are more complicated than women?

They're not giving up yet.

Qi Zhou, a senior author of this study, said that "bi-paternal reproduction barriers in mammals can be crossed," meaning that they aren't going to give up soon because they know that there is some serious scientific potential within the male mice. It's okay men, your time to shine will come soon.

But could this be dangerous?

Is there evil in the midst of this incredible discovery? Possibly. Megan Munsie, Deputy Director of the Centre for Stem Cell Systems at the University of Melbourne, said, "at a technical level, significant refinements will need to be made to avoid growth abnormalities and other complications." Understandably, they don't want to see any mice with two heads.

"However, it is also a reminder of the need to discuss the potential impacts of technology on society, even when at such a preliminary stage," Munsie continued, keeping it real for all of us. "We need to pause and evaluate under what circumstances if any, the technology should be applied and, if so, to whom." She is one smart woman.

But what's in it for us?

You might be asking yourself, "Why is this such a big deal, I'm not a mouse?" You are correct. You are so much more than a mouse. But let me tell you, even for us as humans, this scientific discovery can have an impact on us down the line.

The results from this research will allow us to more clearly understand certain genetic disorders in humans which can diagnose diseases earlier, ultimately saving lives.

Save the sea turtles!

For the animal kingdom, it's good news too. These amazing results could help scientists clone endangered species. Which, in turn, is a gift for us humans, because our grandchildren will live to see sea turtles, leopards and gorillas.

Now that science has found something utterly amazing, let's look to Twitter as they humorously destroy a good thing.

They wasted no time.

Others were not a fan.

When your teacher asks you if you read the book but you really just read the inside cover.

Some people were a little distracted by the baby mice in the photos, which is understandable. I don't know if I would use the word "cute" though. Maybe "squishy" or "weirdly pink."

"Of Mice and Men"

We've got some mice fans out here! At least they can find some humor in all of this.

Some were a little frightened.

This guy is not sure he can handle the truth. The future is scary we get it.

Others had mixed feelings.

Me, explaining my college career to my parents. It's going well, but, it's also entirely out of control.

Seems like some ladies were a little too excited about this piece of information.

Asking all the questions.

This is a fantastic, educated question and I have absolutely no idea the answer.

Getting all the answers.

Hallelujah! A true Twitter victory: we were awarded an informed, and understandable answer to our questions.

They make a valid point.

I mean this is how Jurassic Park started, right? Messing with genes of animals and before you know it there are dinosaurs running around our neighborhoods. Maybe we should be scared?

Life does find a way. Two mommy mice proved that.

A hero in the midst!

Scientists have discovered a way for same-sex female mice to give birth. If this works in humans, welcome to the ex… https://t.co/USTuDXvLKB
— Kenny (@Kenny)1539632596.0

This guy is on a mission to save his own species by warning other men to get their stuff together and fast.

Same-sex mouse parents gave birth to healthy babies. I know this is supposed to be some kind of scientific breakth… https://t.co/OGoSWxCKup
— michael ball (@michael ball)1539601693.0

I don't even know what to say to this person.

I really don't know how to help this guy. He's confused about the situation.

There are so many emotions.

Clearly, there are some mixed reviews and reactions from people. Should we celebrate, be scared or expect mice to take over the world?

One thing is for sure, these mice are making some advance money moves in the lab, and the scientists are not stopping here. Share the news with your fellow science geeks!