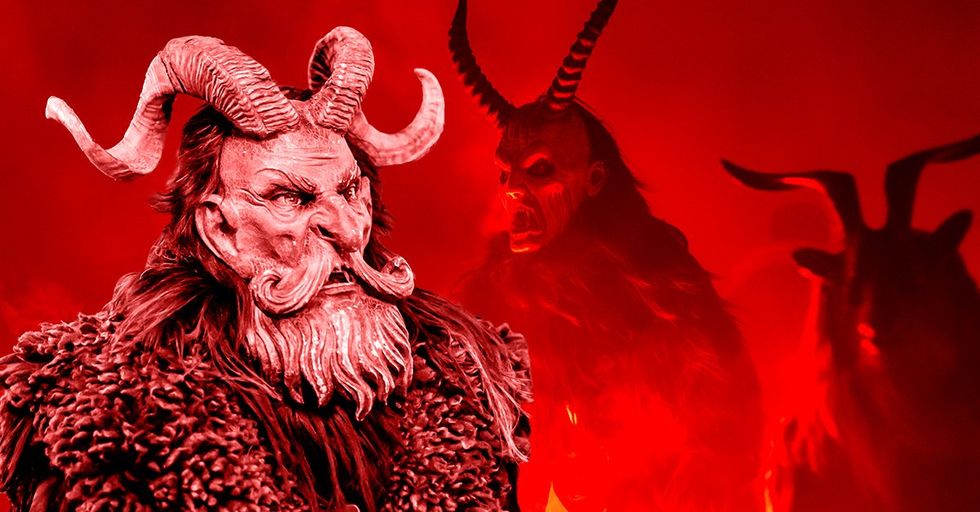 You know Saint Nicholas, and probably Sinterklaas, his Dutch counterpart, but these aren't the only European characters that make an appearance this time of year.

From the earliest days, these Christmas icons have been accompanied by helpers, not all of whom were very nice. In the U.S., we think of Santa and his assistants (usually elves) as good, loving, and wholesome.

But at least one personality traditionally tied to Saint Nick has much more sinister origins, and his name is Krampus.

While the good saint left sweets in the shoes of good children and birch twigs for the naughty, his devilish counterpart's specialty was punishing naughty children. He was also known to beat them, or even kidnap them by stuffing them into his sack.

As the son of the Norse god of the underworld, Krampus's origins pre-date Christianity.

He's half-goat, half-man, and entirely something from a nightmare— a terrifying combination of horns, claws, and thick body fur. In fact, his resemblance to the Christian devil led the church to try to ban Krampus celebrations in the 12th century, and again as late as the 1930s.

But Krampus would not be lost. In fact, he's making a huge comeback.

As terrifying as he appears, he is a much-beloved Christmas character throughout Austria, Germany, Slovenia, Hungary, and the Czech Republic. Krampus parades are on the rise throughout northern Europe.

Traditionally, young men dress in ghastly horned masks and animal furs, and march through town to the terror and delight of onlookers.

This is not a tame, G-rated "scary" parade for children. This is full-on scary demons, fire, blood, claws, gnashing teeth, plus the threat of punishment for naughty children. And it's a family event.

While people from the region know and love Krampus, there are some newcomers who might not understand the appeal.

Austria has seen a huge influx of refugees from Syria and Afghanistan, and some are concerned that Krampus might be misunderstood and terrifying for them. In an effort to help the refugees understand and adopt the culture and traditions of their new home, in some areas refugee children were invited to Krampus education events. They were shown the costumes and props and learned the history of the beloved demonic character.

Krampus's popularity is on the rise again in Northern Europe, and may be spreading across the Atlantic.

Subject of a 2015 movie, and 2016 sequel, American audiences have been introduced to the sinister Santa sidekick. Orlando hosted its own Krampus festival with Krampusnacht in 2016. But are Americans tough enough to embrace the spirit of Krampus?

This guy does not mess around.

We tend to be a bit more conservative than our European counterparts when it comes to what we allow our children to see and do. Our Christmas is all joy and sweetness. So is there a place for a real demon? Will we have our elves narc on our naughty children if a visit from Krampus is the consequence?

Maybe it's what we all need. Our country is having a hard time getting along. Who among us is innocent? Do any of us deserve sweets in our shoes? Or, maybe Krampus is already here. Maybe he's the cause of all of this.

All this time we've been worried about the wrong Christmas character watching us and knowing if we're naughty.

Krampus is the one to watch out for! That jolly fat man with the toys is no threat. It's hard to imagine American families lining the streets for a parade of terrifying hell demons, but European families have been doing just that for centuries.

Things have gotten a little too sweet around here.

All these elves up to naughty tricks each night need something better to do. Instead of reporting to the North Pole and Santa, what if they reported each night to the fiery underworld and Krampus? Maybe that would keep them out of the flour and marshmallows.