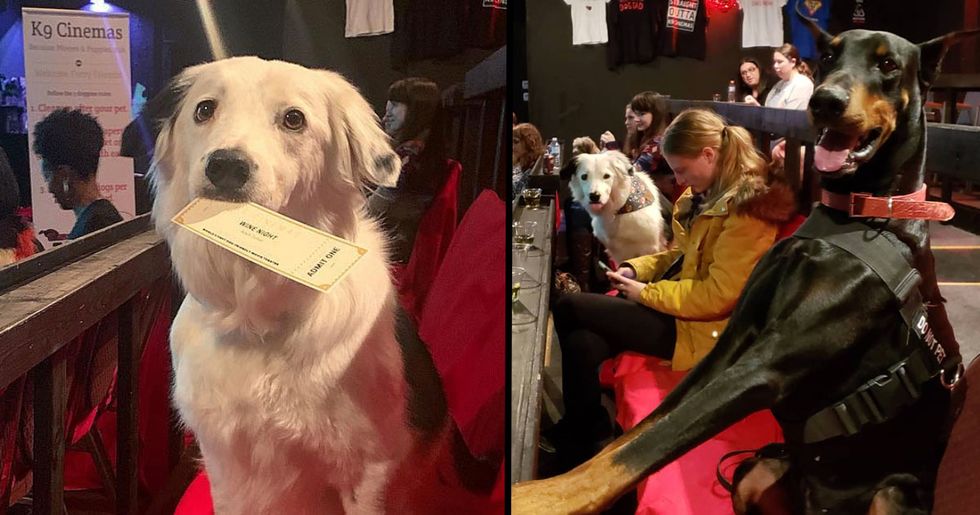 Okay, I’m all for getting overly drunk at the back of the cinema and it seems like I'm not the only one. Smuggling cheap quarter-sizes of various lascivious beverages into movie theaters has become something of a past-time amongst the tearaway film-buff community. Even for the sensible folk out there, beer and pizza nights in independent cinemas have become an increasingly common segment of movie-going culture.

One cinema in Texas has embraced the datum wholeheartedly and now dishes out bottomless wine for the reasonable price of fifteen dollars. And not only that, but you can also bring your dog. Now, who doesn’t want to watch a movie, wasted, with their favorite canine chum?

Since the first commercial motion capture screening took place in Paris in 1895, the culture of the cinema space remains in its infancy.

It started with a scream.

When the Lumiere Brothers set a viewing for their first motion picture, Train Pulling into the Station, the audience screamed in horror and fled the theater, afraid that they would be crushed under the weight of the fast approaching train.

Sound took a while to take hold in the 1920s but, when it did, it transformed the movie-going experience. The first "talkie" was a movie called The Jazz Singer and was a major hit.

More and more, the masses would flock to the theater as, through the miracle of sound recording, they felt closer to the medium.

Sound was very slow to take hold. This was because, traditionally, live vocal performances were a strong facet of the artistic culture.

In India, on the other hand…

The "talkies" exploded the genre, laying the groundwork for the all-singing, all-dancing Bollywood that we’re familiar with today.

It was, unsurprisingly, the US that first peregrinated the idea of the drive-in cinema.

There, the social and formal norms that stipulated some layer of civility were stripped away, and the stereotype of the sex-minded adolescent taking their significant other to the drive-in was born.

This fell in line with the invention of the B-Movie.

Throughout its early stages, directors wanted their films, for the most part, taken seriously. But, come the 40s/50s, as equipment and planning permission became cheaper and the viewership increased dramatically, directors could afford to take a more genial approach to their work, and the B-Movie was born.

These are some of my favorites from the era.

I implore you, see for yourself, this was a lot of fun to research.

Braces on my fangs…

A story about a teenage couple who accidentally run over an alien with their car, prompting terrible extraterrestrial backlash.

A teenage alien falls in love with an earthling. The pair team up to halt a lobster invasion.

This one’s great. There’s this officer in the army who gets exposed to radiation and just doesn’t stop growing. He’s also kind of a pervert and spends most of his time peeking through fifth story windows in the hope of catching someone taking a bath.

Right, enough of that.

People love to feel part of a community. In-jokes are, after all, the funniest of all jokes, any meme page will testify to that. Cult movies have been around forever, but cult viewings essentially started with…

Dated to tie in with the punk tradition, the Rocky Horror Picture Show commanded an exuberant audience, all of whom would attend viewings and stagger out after the credits roll, inebriated and full of cheer.

The Evil Dead is another.

Then there’s Withnail and I.

You American movie fans out there will be less likely to have seen this film, but we strongly recommend that you give it a watch. It’s brilliant, hilarious, and quintessentially British.

And it makes for a great drinking game… ask a fan, they’ll explain.

Try staging a showing of Mean Girls without the inevitable rabble of cackling, tipsy fans. And we understand, it’s the right kind of movie for that. Very fitting.

Donnie Darko’s an odd type of cult film. People don’t tend to get drunk at screenings of this movie, instead, it's inspired skeletal Halloween outfits for future generations.

Go to a screening!

The Ziegrelt Theater in New York and the Prince Charles Theatre in London both house rapacious participatory screenings of the film. Baying crowds indulge in every in-joke from hurling plastic spoons at the screen to shouting "Meanwhile, in San Fransisco!" every time there’s a shot of the bridge.

Now, there's a game-changer in Texas.

For fifteen dollars, one movie theater in Texas is offering bottomless wine. That seems dangerous to me.

What's better than getting drunk at the theater?

Getting drunk with your dog at the theater!

Obviously. Dogs don’t judge you for being drunk. In fact, they like you more for it; you become more erratic and affectionate.

K9 Cinemas opened at the close of 2018 and it’s been running smoothly ever since.

There are a few sensible rules that viewers much adhere to before they bring their pup inside with them.

Your dog’s business is your business. Cinema cleaning jobs are bad enough.

All first-time dog viewers must bring professional papers stipulating that the animal has been fully vaccinated. Fair enough.

Is the mixture of wine and dogs not for you? Have you ever thought that you would go if only the screen was bigger, the food was better, the seats were more comfortable, or the experience was altogether more unique? Well, now you can. We've put together a list of the best movie theaters around the world, including the Swiss cinema that has actual beds! But first, let's take a look at which movies you could see this year!