19 Childhood Movies You Should Show to Your Kids | 22 Words 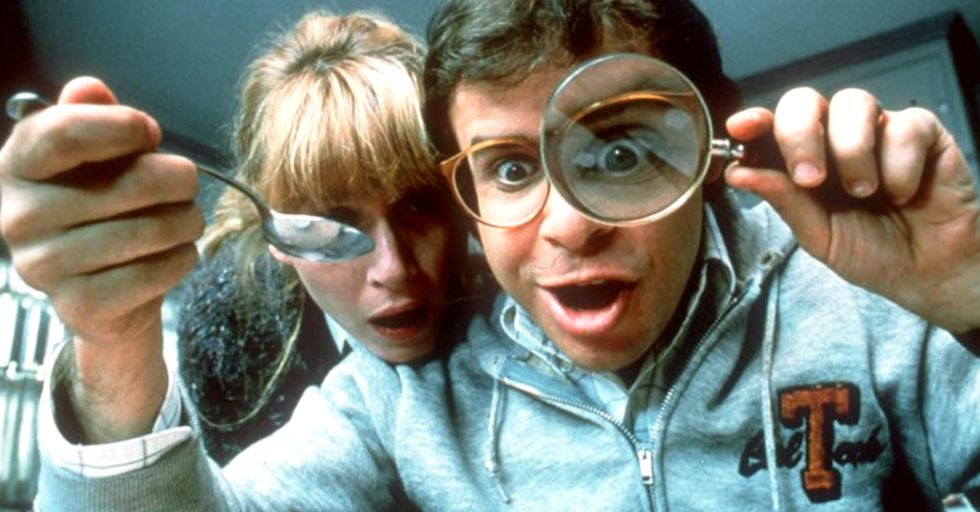 19 Childhood Movies You Should Show to Your Kids

Every generation is nostalgic for the movies of their childhood.

But the movies of our childhood, and by our childhood I mean the '80s and '90s, are objectively the best. It's just a fact.

While this isn't a comprehensive list, these are some of the most important movies you can show your family.

We millennials are all grown up now with families of our own. And our families will know every word to The Princess Bride if we have anything to say about it.

First up, obviously, is the greatest movie of all time. It's a tale of adventure and true love and also a brilliant parody of those things.

Here's the thing: Ghostbusters is a total classic. And I might say something a little controversial here, but so is Ghostbusters 2.  It's also good!!!! These are a great baseline from which to watch the new Ghostbusters featuring four badass ghostbusting women.

Goonies never say die! And this movie won't die either. It's a surprisingly dark tale for a kids' movie, but it's about friendship and adventure. And it has a baby Josh Brolin in it, and that's all you really need in a movie.

This movie will live on in our hearts for-eh-VER. The Sandlot is the quintessential sports/dog/nostalgia movie. It has something for everyone, and by that I mean it has a giant slobbery dog. The next one is oft forgotten, but it shouldn't be.

This movie doesn't make a lot of lists, probably because it's about female friendship, but it should. Its cast is insane (Christina Ricci, Rosie O'Donnell, Thora Birch, Melanie Griffith, Gaby Hoffmann, Demi Moore, Rita Wilson, and more).

He's a legend. He's a badass. He's Abe Froman, Sausage King of Chicago. Ferris Bueller is a character everyone needs to know and a movie for the ages.

"It's not a tumor!" Kindergarten Cop takes the action and drama of a typical Arnold Schwarzenegger film and sticks it in a classroom full of five-year-old kids.

Sure, there is an original. But the Lindsay Lohan Parent Trap is a perfect movie. It deserves to be in the history books and the memories of your children and your children's children for generations to come.

Home Alone may be a Christmas movie, but it's really just an all-time classic. It's every kid's dream, and nightmare rolled into one Macauley Culkin-led vehicle. The next one is perfect for anyone who has ever felt small.

Honey, I Shrunk the Kids

This movie will forever make you want to be tiny, so you can slide down giant blades of grass and ride ants like horses. And again, this is a case where the sequels might be even better than the original. Honey, We Shrunk Ourselves FTW!

Sure, Chris Pratt is a dreamboat. But nothing compares to Jeff Goldblum and the rest of the cast of the original Jurassic Park. It's still the best one, hands down.

Marty McFly and Doc Brown. The Delorian. You basically have to watch this movie to be a person. It's a total classic.

There are more jokes per minute in this film than most of the other movies on this list combined. Sure, some of them are a little bit racist and haven't quite aged gracefully. But Airplane! remains a classic to this day.

Speaking of Leslie Nielsen being hilarious and over-the-top, The Naked Gun. This one gets a little racy, so maybe keep it out of reach of super small children. It also stars a young, hot O.J. Simpson, you know, before the murdering. The next one gave us Drew Barrymore and Reese's Pieces.

"E.T. phone home!" Even though this little alien is maybe the ugliest creature in the galaxy, E.T. is a classic. Every kid wanted to ride their bicycle into the sky after watching this movie.

There are so many versions of this classic orphan story, but if you're a millennial like me, you most likely grew up with Carol Burnett as Ms. Hannigan. It's a hard knock life, that's for sure.

There are countless Roald Dahl adaptations that deserve a place in your memory (Willy Wonka and the Chocolate Factory, James and the Giant Peach, The Witches), but book-loving, telekinetic Matilda is the best.

Mary-Kate and Ashley Olsen gave us some of the greatest movies of the '90s, but It Takes Two was obviously the peak, mostly because it also starred Kirstie Alley and Steve Guttenberg. It does not get any more '90s than that. Share this with someone you love and add your own favorites in the comments!